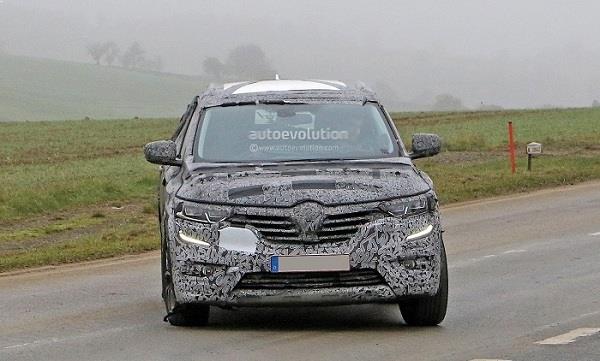 Renault that recently launched the Kwid hatchback in India, is now eyeing the growing SUV segment. The French automaker is reportedly working a new seven-seater SUV that will be introduced as replacement to the ageing Koleos in India.

Since the company had announced to come with “one new model every six month”, the SUV is expected to be unveiled at the 2016 Geneva Motor Show or Paris Motor Show.

The India launch might happen sometime in 2017 or 2018. This new 7-seater SUV might get a new name when launched in the country. Upon its launch, the Renault’s new seven-seater SUV will face competition from products likes Toyota Fortuner, Ford Endeavour and Mahindra XUV500.

The Renault’s upcoming SUV is likely to make its debut at the 2016 Geneva Motor Show in March or the Paris Motor Show in September/ October 2016. It might hit the Indian shores sometime in 2017 or 2018.

With Toyota Fortuner, Ford Endeavour and Mahindra XUV500 in its sight, the Renault’s new SUV is likely to be priced between Rs. 20 lakh – Rs. 25 lakh (ex-showroom).

The Renault’s new seven-Seater SUV will be based on Renault-Nissan’s CMF (Common Module Family) platform that also underpins the new-generation Nissan X-Trail. The new SUV will be significantly bigger and longer than the existing Koleos. It is expected to be 5-meters (approx.) long, while its replacement measures 4.5-meters. With huge and longer body-built, the new SUV is likely to come with seven-seat configuration.

The latest spyshots also reveal exterior and interior design of the vehicle. The Renault’s new SUV seems to have taken several of its design cues with the new Renault Talisman sedan that made its public debut at the 2015 Frankfurt Motor Show. With aggressive front grille, sweptback headlamps and pronounced bonnet, the vehicle is expected to look more evolved and appealing than the Koleos. Inside the cabin, the car features leather-wrapped grab handles and armrest, dashboard with black finish and small aluminum inserts. The steering wheel is likely to be borrowed from the Talisman.

The New Renault Seven-Seater SUV is likely to share the engine and transmission with the Renault Talisman. It might be powered by a 1.6-litre dCi diesel engine that will offer an estimated power of 200bhp. Similar to the Nissan X-Trail, the Renault’s new SUV is likely to get a CVT (continuously variable transmission) gearbox, coupled with electronic 4WD (four-wheel-drive) system.