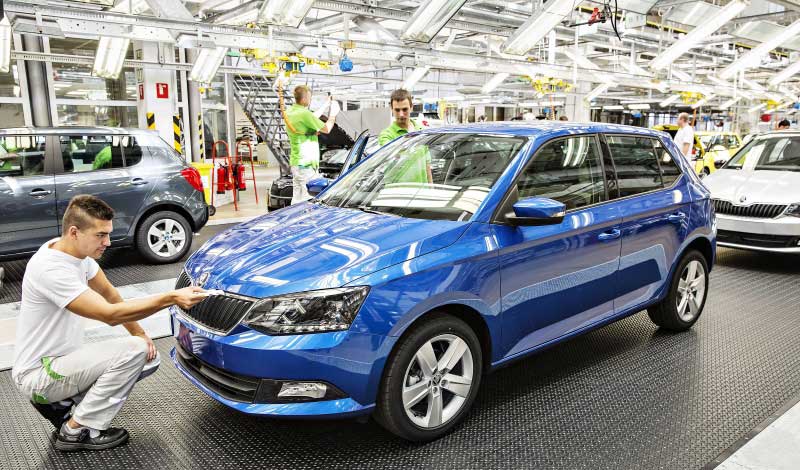 Skoda has recently revealed the new generation Fabia hatchback which is scheduled to be unveiled at the 2014 Paris Motor Show. Ahead of its launch by year end, the Czech automaker has started the production of the new Fabia at the company’s manufacturing unit in Mlada Boleslav. First third generation Fabia, finished in the Racing Blue shade, has been rolled off the production line. [Read More- New Skoda Fabia launch updates & details] Based on the thoroughly modified PQ25 platform, named as PQ26, the new Fabia follows company’s new corporate design language. The front gets a newly designed grille inspired from the new Octavia. Its new grille is complemented by newly designed headlamps. The headlamps get several elements such as projector, halogen, and clear lens turn indicators and LED daytime running lamps.

Inside the cabin, the new Fabia is equipped with 17 ‘Simply Clever’ features, nine of which are new. The company has increased the interior headroom, legroom and shoulder space for both front and rear occupants. The new Fabia offers a large luggage carrying space of 330-litres, which is around 15-litres more than the previous model. The boot space can be increased up to 1,150-litres by folding the rear seats. For the first time, the new Fabia gets MirrorLink technology that allows smartphone apps to be displayed on the screen of the infotainment system via a USB connection.

The new Fabia will get the 1.2L TSI motor and the 1.4-litre 3-cylinder diesel motor. It is claimed to be 17 per cent more fuel efficiency than the previous model. The transmission options include five-speed manual and DSG automatic gearbox.