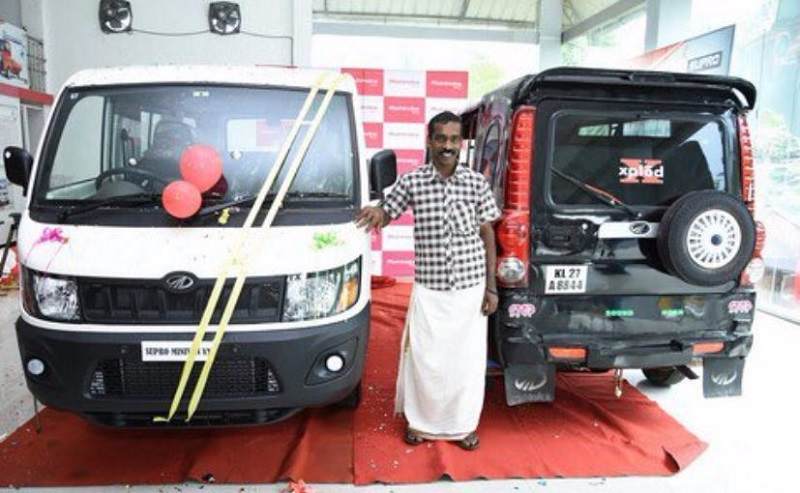 In his prompt response, Mr Anand Mahindra also mentioned to buy the auto from the owner and announced to reward him with a four-wheeler.

What the Kerela-based auto driver, Sunil recently witnessed makes us wonder how small is this world and how technology has bridged the gap to connect us all. This is about Sunil, an auto rikshaw driver from Kerala, who wouldn’t have imagined in his wildest dreams that his customized auto with a Scorpio resembling rear will be displayed at the Mahindra and Mahindra museum. Yes, it is true! The auto rikshaw with a customized Scorpio rear has now been acquired by Mahindra which will be a part of its priced possession at Mahindra and Mahindra Museum.

It is not alone the excitement of hiscreation being featured with other such innovations at the museum, but the auto driver also received a brand new Supromini-truck in exchange of the modified Auto.  The story date back to March 19, 2017 when a social media enthusiast posted the image of Sunil’s auto tagging Anand Mahindra. The person identified as Anil Panicker tweeted about the popularity of Scorpio among Indians along with the image of the Scorpio-auto.

While Anand Mahindra took notice of the modified auto rikshaw, he immediately thanked Panicker for bringing the Scoprio resembling auto to his notice and even asked him to help track the owner. In his prompt response, Mr Anand Mahindra also mentioned to buy the auto from the owner and announced to reward him with a four-wheeler.

Meanwhile, Sunil who was unware of any such events, was recently contacted by the Mahindra team and has now been given the brand new Supromini-truck in exchange of his modified auto rikshaw as promised by Mar Anand Mahindra. This image of Sunil with his new Supro alongside the modified auto is a testimony to his story that seems to have a happy ending.

While creativity finds its way to recognition, this incident also entails how social media platforms can be useful at times.