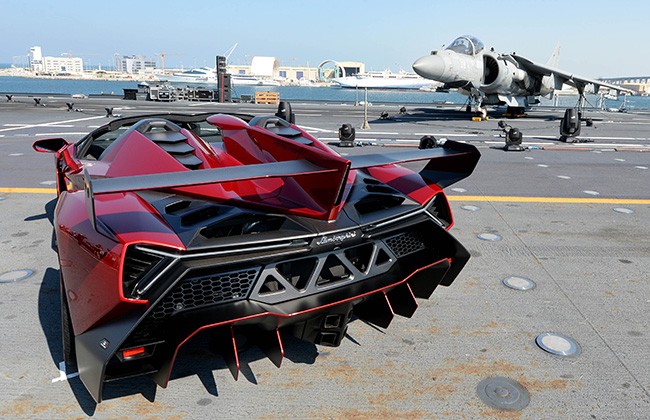 Lamborghini Veneno Raoadster which made its debut in December last year, is now officially the world’s most expensive car. This title was earlier grabbed by the Bugatti Veyron. This exclusive super sports car was first shown to the public on an Italian naval aircraft carrier at a special event in Abu Dhabi. The Veneno Roadster is priced £2.8 million (around Rs. 28 crore) before tax. Only nine units of this Roadtser will be produced and is powered by the same engine that powers the Aventador LP700-4. Under the hood, the Lamborghini Roadster gets the 6.5-litre V12 engine that churns out a massive 750bhp of top power. This engine is paired to a seven-speed semi-automatic gearbox with 5 shift models that transmits the power to permanent all-wheel drive system. It accelerates to 100kmph from rest in mere 2.9 seconds and hits a top-speed of 355kmph.

The wheels of the Lamborghini Veneno Roadster have been designed to enhance brake cooling, which is equipped with carbonfibre ring around the edge to offer cool air to the carbon ceramic discs. The company has used cabonfibre in car’s construction and the lightweight material.