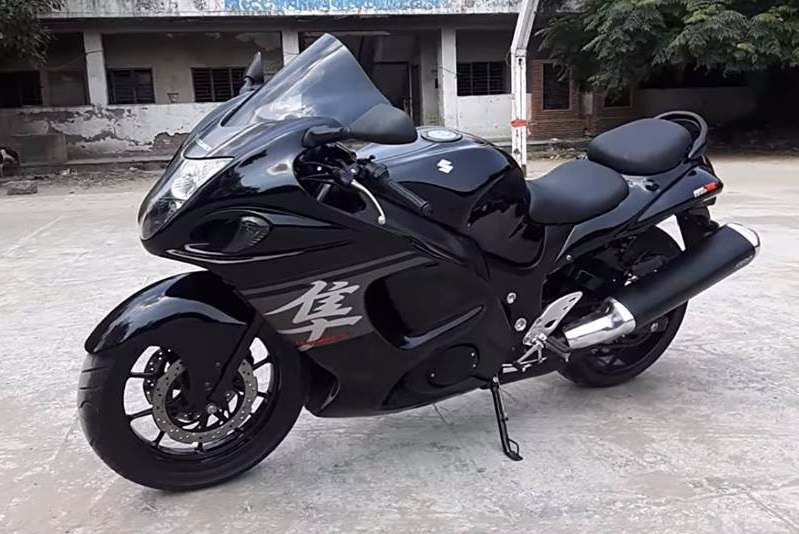 The custom house has taken a humble Hero Karizma and has modified it into the iconic Suzuki Hayabusa.

The Suzuki Hayabusa enjoys a cult following in our country. Hayabusa is a common name given to every superbike in India. For general public, every fully-faired sports bike is a Hayabusa or the ‘Dhoom’ bike as they call it. It’s that popular among the masses.  Also See – Top 5 Modified Royal Enfield Bullets

Suzuki’s flagship motorcycle is really capable and has a top speed of approx. 300kph. It is known to be one of the most practical superbikes. But owning it – is a really expensive affair. So, Delhi’s GM Custom has a solution to it.

The custom house has taken a humble Hero Karizma and has transformed it into the Hayabusa. The motorcycle gets a custom body kit making it a perfect replica of the much-loved ‘Busa. It sports an identical headlight, tail light, large twin exhausts, twin disc brakes up front and even the instrument cluster. The handlebar clamps features the Hayabusa logo for a realistic feel. The bike also comes equipped with a custom swingarm to mount the monoshock and the front end uses telescopic forks. There are new black alloys in place as well shod with fatter rubber. The attention to detail is impeccable. Also See – Best Modified Bajaj Pulsars 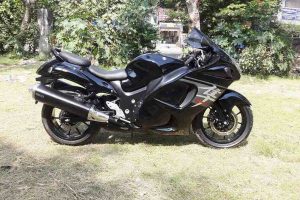 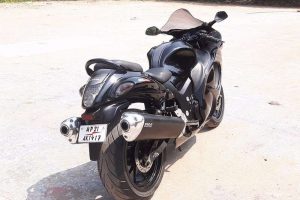 Here comes the glitch. Don’t be fooled by its humongous body because it still has the same heart. The original Hayabusa has a massive 1340cc engine, this look-alike ‘Busa retains the stock engine of the Karizma. So, it has a 223 cc engine which makes footling 17bhp & 18 NM. In contrast, the Suzuki engine puts out a crazy 197 Bhp & 155 Nm, which enables the superbike to go blistering fast. This replica, on the hand, will find it difficult to even touch three digit speed with the kind of extra weight it has got.