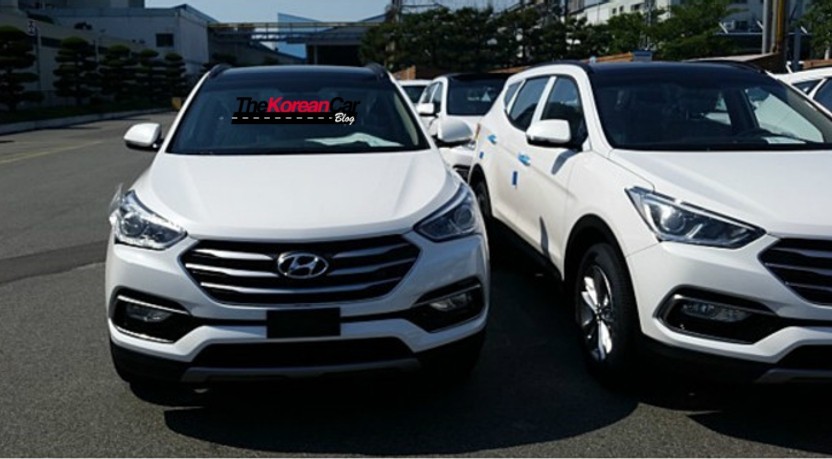 The 2016 Hyundai Santa Fe facelift has been spied uncamouflaged in Korea, where it’s expected to be unveiled in the coming weeks. Though, we will see the car in India sometime in 2016. It will be brought via the CKD route and then assembled at the company’s local plant.

The spyshots of the facelifted Santa Fe reveal the exterior styling of the SUV that resemblance to Hyundai’s new Tucson. On the front end, the car features an all-new front bumper, slightly revised chrome elements, new front grille and muffler, LED headlamps and new fog lights with chrome enclosures. Except the new alloy wheel design and chrome treatment on windows and B-pillars, the side profile remains largely unchanged. The rear profile, too, is revised with new rear lights, modified bumper and exhaust tips. The 2016 Hyundai Santa Fe will be the company’s first hybrid SUV with new e-4WD drivetrain system that will undergo mass production. The e-4WD hybrid system consists of electric motors and a gasoline engine. While the electric motors deliver power to the rear wheels, the petrol unit powers the front wheels. The SUV’s regenerative braking system generates energy during deceleration that can be used for charging the motor’s battery. A plug-in feature can also be used for the same purpose. The new Santa Fe facelift continues to feature the 2.2-litre, CRDi diesel engine that also powers the existing model. It churns out a maximum power of 194.3bhp at 3800rpm with a peak torque of 420Nm between 1800rpm – 2500rpm. Though, Hyundai might tune the engine for better fuel economy and lower CO2 emissions.

Chrome treatment on windows and B-pillars