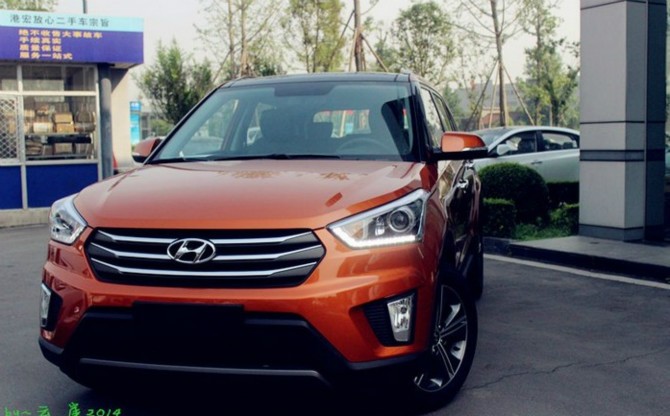 We were the first to report you that Hyundai ix25 compact SUV would make its way to India around 2015. It was backed by several spied images of the vehicle being captured during test runs in the country. This time we bring to you, yet another spy-shot which is speculated to be one of the top-end trims as it reflects projector headlights, LED daytime running lights, alloy wheels, fog lights and a triple-slat chrome grille.

However, on the contrary, speculations further suggest that there is one more trim above it with dual-slat chrome grille, which would be the top-spec variant and would be christened as ‘ix25 Sport’. The ix25 compact SUV would go on sale in China from October 9 firstly, followed by several international arenas including India. The Chinese model would be in-housing 1.6L and 2.0L engines which would be coupled with 6-speed manual and automatic gearboxes, respectively. The base and mid-level variants would be front wheel drives while the top-of-the-range variant would comprise of an all wheel drive system.

Coming to the India launch, it is likely to hit the Indian shores by mid 2015 as it has already commenced testing in the country. Moreover, recent spy-shots revealed it testing besides Renault Duster and Ford EcoSport – its arch foes. However, it would also challenge the likes of Nissan Terrano and Mahindra Scorpio in the Indian auto industry. It is expected to be arriving at a sticker price ranging in Rs. 8- 10 Lakhs.