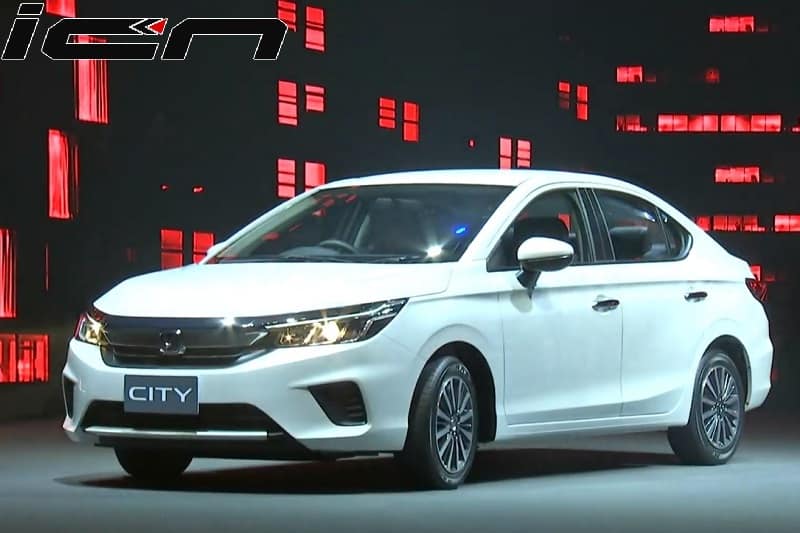 The sedan comes in 5 colour schemes – Platinum White Pearl, Black Crystal, Lunar (Metallic), Morden Steel Gray (Metallic) and White Taffeta. The Ignite Red paint scheme is exclusively offered for the RS model. While its official India launch details are yet to be announced, it’s likely to hit roads in the second half of 2020.

The fifth-generation Honda City shares resemblance with the latest versions of the Accord and Civic sedans. Read – BS6 Honda City Prices Leaked Ahead of Launch

Face of the new City looks refreshing with elements such as a larger and wider chrome grille, revised wraparound LED headlamps with DRLs, newly-designed fog lamps and sculpted bonnet.

At the rear, it gets the C-shaped LED taillamps and bumper with vertically positioned reflectors. The sedan comes fitted with multi spoke diamond cut alloy wheels and 185/60 R15 tyres. Read – New Honda Compact SUV To Debut In 2020

Compared to the old model, the 2020 Honda City is 100mm longer and 53mm wider. Though, its height and wheelbase have been reduced by 28mm and 11mm respectively.

Interior of the 2020 Honda City seems inspired by the new-generation Honda Jazz (Honda Fit) that recently made its world debut.

Features such as all-new dashboard layout and newly-designed multi-functional steering wheel with mounted audio, Bluetooth and cruise controls are sourced from its smaller sibling.

The sedan’s new model also gets an all-digital instrument console with clear readouts. For connectivity purpose, there is an 8.0-inch touchscreen infotainment system with Apple CarPlay and Android Auto support. While the Thai-spec model gets all black interior them, the Indian version might come with beige on black theme.

Talking about the engines, the 2020 Honda City (Thailand-spec) will be made available with two powertrain options. The petrol version will get a new 1.0L, 3-cylinder iVTEC turbocharged engine pushing out power close to 122bhp and 173Nm of torque.

The new turbocharged petrol engine is paired to a CVT gearbox with paddle shifters (on higher trims only). It delivers an impressive mileage of 23.8kmpl (as per the Thailand test cycle).

A new petrol-hybrid variant of the new City will also be on offer. It will use a 1.5L petrol engine with Honda’s compact i-MMD mild hybrid technology for generating power. The 2020 Honda City hybrid version is claimed to deliver 33% more fuel efficiency and better performance than the regular model.

In India, the 2020 Honda City will come with the BS6-compliant 1.5L iDTEC diesel and a 1.5L petrol engine options.

Similar to the new Amaze, the fifth-generation City could get the diesel-CVT combination. However, there is no clarity whether the mild hybrid version of the sedan will come to India or not.