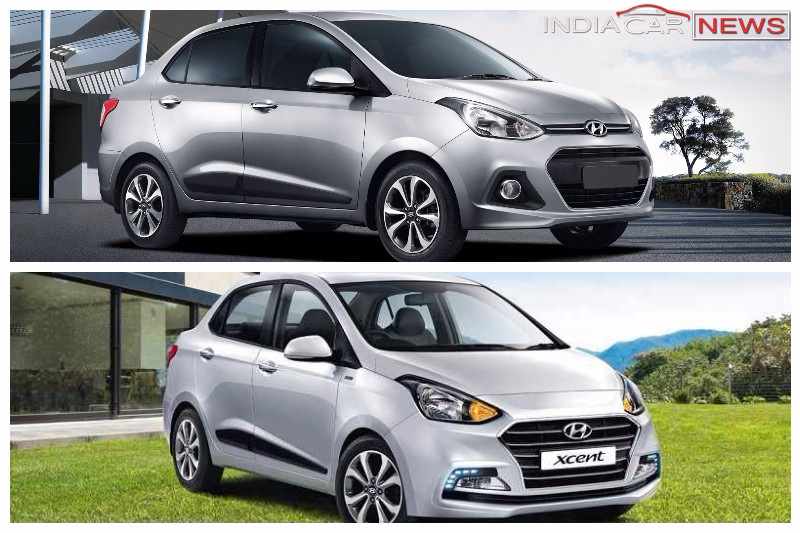 For now, we pit the 2017 Xcent against the Xcent-Prime to discern what has changed in the facelifted model.

Hyundai Xcent followed the established rivals Maruti Swift Dzire and Honda Amaze in the subcompact sedan segment back in 2014. Three years after its introduction, the sedan has received its first mid-life facelift. While this does not indicate end of the road for the old Xcent which is quite popular among the fleet operators. The old Xcent will however be restricted to the fleet operators under the Xcent-Prime nameplate and the Xcent facelift will cater to the individual buyers.

This strategy worked for Maruti Swift Dzire as it segregated the Dzire tour aimed directly at the fleet buyers from the current gen model that is set to transit into the third generation in May. With Hyundai adopting the same approach for Xcent, it will be interesting to see if works in sedan’s favour. For now, we pit the 2017 Xcent against the Xcent-Prime to discern what has changed in the facelifted model. Here is our spec-based comparison, read out to know more.

In terms of pricing, the Xcent facelift is cheaper by a minimal margin with prices starting from Rs 5.38 lakh to Rs 7.09 lakh for the petrol range. The diesel Xcent on the other hand falls in the price vicinity of Rs 6.28 lakh to Rs 8.41 lakh.

Taking the above prices into consideration, the old Xcent was priced a tad higher. The reason could be standard ABS which is now available only with the SX and SX(O) trims in the facelift. (Please note the prices mentioned above are subject to change)

The 2017 Xcent has received styling updates in line with the feedback received from customers. While most of the changes are made to the front and rear, it gets superficial changes to the sides. Although, Hyundai claims to have made changes reminiscent of Grand i10 facelift, the sedan looks distinct from its donor hatchback. Up front, there is a new cascading hexagonal grille with horizontally placed chrome slats. The bumper has changed too and the fog lamps also don a new design.

Additionally, the LED DRLs around the fog lamp housings are restricted to the top-spec variants. In profile, the car looks identical, particularly the diesel version which is bereft of the new alloys. That said the petrol Xcent sports redesigned alloys and that’s possibly the only change made to the side profile. Moving on, the rear side has been reworked for a refreshed look. The boot is all new and it gets larger wrap-around taillights along with restyled rear bumper and reflectors on the lower bumper.

Nothing much has changed on the inside in terms of styling, though Hyundai has packed new equipment including the 7-inch touchscreen system that also serves as a reverse camera. The infotainment system comes with Apple CarPlay, Android Auto, voice recognition and MirrorLink with audio-video navigation. There is a new shade for the seat covers which is another new addition. But the 5.0-inch touchscreen infotainment system from the Grand i10 is missing in the mid-level variants.

The Xcent facelift continues using the same 1.2-litre petrol engine that also powers the Xcent-Prime. The engine is good for 82bhp at 6000rpm and 114Nm of torque at 4000rpm.

For the diesel version, Xcent gets a new 1.2-litre oil burner making top power of 74bhp and 190Nm of torque. On the other hand, Xcent-Prime continues using the 1.1-litre U2 oil burner, tuned to make 174bhp and 180Nm of torque. Transmission options remain unchanged on both the models with a standard five-speed manual unit and a 4-speed auto box on the S petrol.

In terms of fuel efficiency, the Xcent is claimed to return slightly higher fuel economy with the petrol manuals rated at 20.14kmpl and the auto variants claimed to deliver 17.36kmpl. The diesel powered Xcent with the new 1.2-litre engine delivers 25.4kmpl as claimed by Hyundai. The Xcent-Prime on the other hand returns 19.1kmpl in petrol guise and 24.4kmpl in diesel guise.