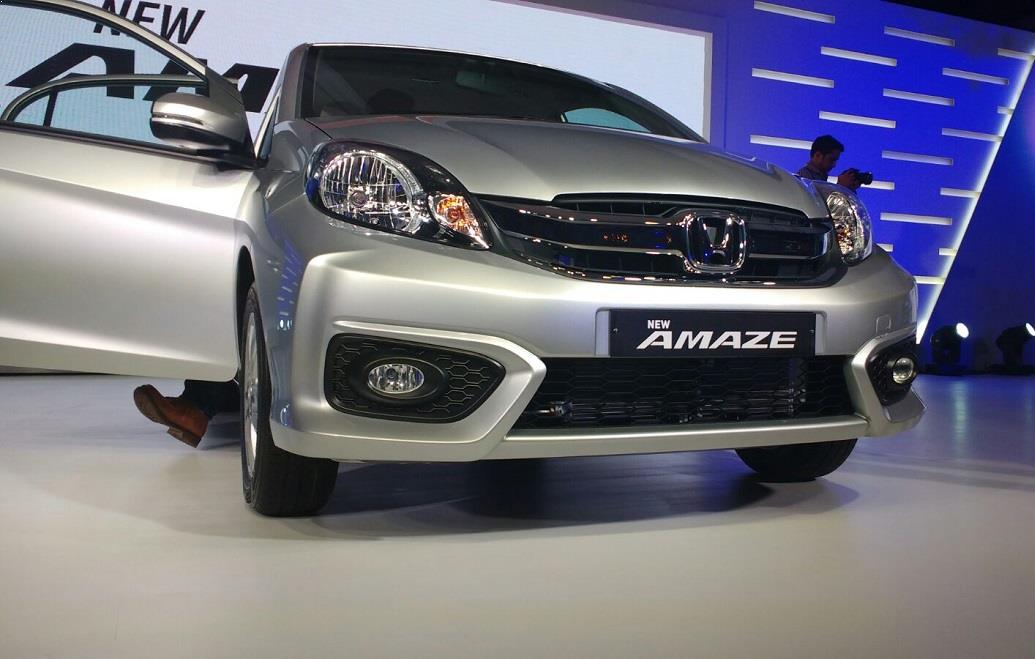 New Honda Amaze 2016 was finally launched in India today in the price range of Rs 5.29 lakh – Rs 8.19 lakh (ex-showroom, Delhi). The Japanese carmaker has already started dispatching the vehicle at its dealerships across the nation, and deliveries at most dealerships will begin soon. The new Honda Amaze 2016 model has received minor cosmetic changes along with a bunch of additional features. Though, the most significant update has come in the form of the first-in-class CVT automatic gearbox. This is the same transmission that’s available with the City and Jazz.

Though, the sub-compact sedan continues to be powered by the existing engine lineup – i.e. a 1.2-litre i-VTEC petrol and a 1.5-litre i-DTEC diesel. Similar to the pre-facelift model, both the powertrains come paired to a 5-speed manual transmission. While the CVT automatic gearbox is offered only on the petrol variant. Despite several changes inside and out, the company has kept its price almost similar to that of the pre-facelift model. Available in a total of 6 petrol and 4 diesel variants, the new Honda Amaze 2016 is priced between Rs 8.19 lakh  – Rs 8.19 lakh (ex-showroom, Delhi). The CVT is offered in two variants S and VX priced at Rs 7.19 lakh and Rs 8.19 lakh respectively.

Read: Here’s Everything You Need to Know About 2016 Honda City

Launched in 2013, the Honda Amaze has been a runaway success for the company. The proof of its popularity lies in the fact that the vehicle had achieved a sales milestone of 2 lakh after within 3 years of its launch. But, due to no updates given to the car despite several new launches in the segment, the sub-compact sedan’s sales have been dipping for last few months.

The Honda Amaze that was criticized for its interior quality, fit & finishing, has addressed these issues with the facelift. The updated model gets a new dashboard that seems inspired from the BR-V compact SUV, while the instrument cluster is picked from the Jazz premium hatchback. Other noteworthy features include a touchscreen AVN system, automatic climate control and revised AC vents. Rest of the equipments have been carried forward from the existing model such as 2 DIN integrated audio system with USB and Aux-in connectivity, seat upholstery, interior color scheme, steering wheel with mounted audio controls, etc. The list of safety features, too, remain unchanged. Though, the compact sedan now gets dual airbags as an optional feature even on the base variant.

Power for the new Honda Amaze 2016 comes from the same 1.2-litre i-VTEC petrol and 1.5-litre i-DTEC diesel engine that do duty on the pre-facelift model as well. The diesel mill, with a 5-speed manual transmission, produces a maximum power output of 99bhp at 3,600rpm and a peak torque of 200Nm at 1,750rpm. Whereas, the petrol engine is capable of generating 87bhp of power at 6,000rpm and 109Nm of torque at 4,500rpm. This gasoline unit comes with two transmission options – a 5-speed manual and a CVT automatic gearbox.