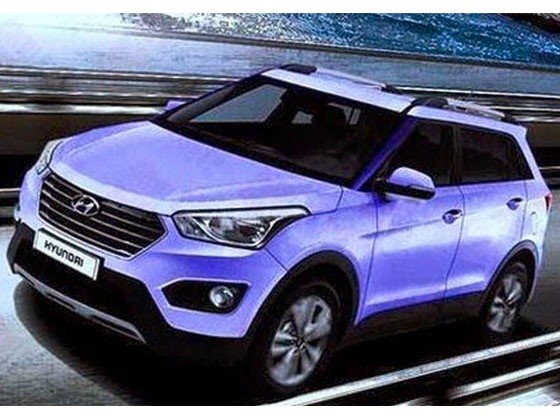 South Korean automaker is set to unveil the new ix25 compact SUV at the 2014 Beijing Motor Show. Ahead of its unveiling next week, the official image of the SUV has been leaked on the web.

The picture shows that the ix25 share its styling cues with the current generation ix35. The vehicle gets wrap-around headlight cluster and aggressive lower front air-intakes which sports a set of fog lamps, large skid plates and roof rails to provide rugged SUV stance. Instead of split front grille (ix35), the Hyundai ix25 has hexagonal chrome grille that defines the company’s new design language.

This global product will be developed in China and is likely to go on sale by the end of this year. Based on the new generation i20 hatchback platform, the ix25 measure about 4.25 metres in length, and it has a large wheelbase of 2,570mm.

The Hyundai ix25 compact SUV will be made available in both petrol and diesel guise. The diesel version will get 1.4L and 1.6L turbocharged engines, while the petrol models are likely to sport 1.2-litre and a 1.4-litre petrol engines.

We believe that this model will not make its way to the Indian car market owing to its high price. The company might introduce a compact SUV based on the Grand i10 platform.