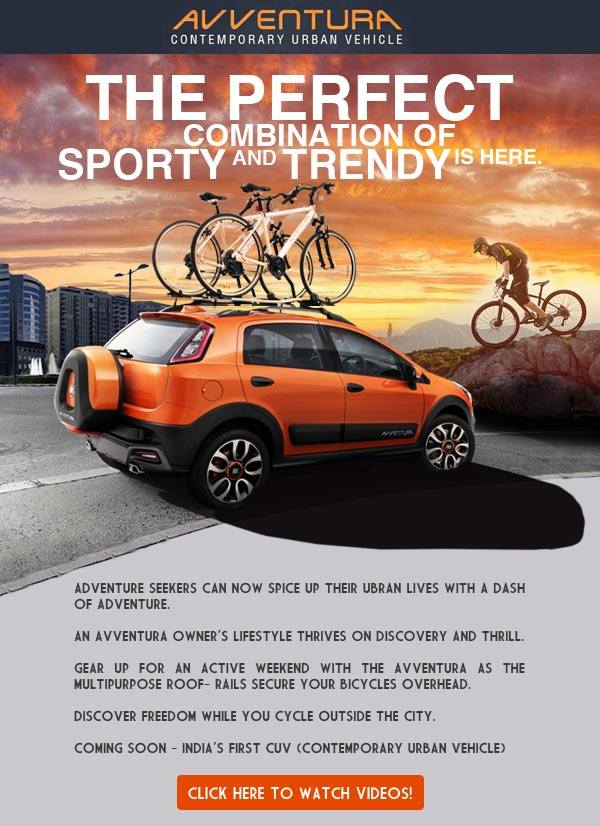 We were the first to report you that Fiat Avventura crossover would be launched in the first week of October during the festive season. Now, the Italian automaker has released the second teaser of its UV Avventura stating it to be the country’s first Contemporary Urban Vehicle (CUV) and it further reads as ‘Coming Soon’. It would be a yet another entrant in the hatch-turned-crossover segment with Volkswagen Crosspolo, Toyota Etios Cross being already present in it.

Fiat Avventura has quite an identical front fascia to the Punto EVO and it is based on the Punto Grande platform. Though, a few elements have been added to spice up the sportiness of the crossover. The few extra elements would be 16 inch alloy wheels, roof rails; body cladding and a hatch lid mounted spare wheel would be gracing the crossover. It is being speculated that it would have a ground clearance in excess of 200mm which makes it highly sustainable for the uneven terrains; Guess, why Fiat has termed it a ‘Urban’ crossover as it would be also performing well in rural regions. Also, due to the inclusion of aforesaid elements, it would be a tad heavier than the hatch Punto EVO.

The interiors would be sourced directly from the recently launched Punto EVO to make it cost effective. Mechanically, it would be adorning both the Punto EVO’s engines – 1.4 liter FIRE petrol with 89bhp of top power and 115 Nm of peak torque, and the 1.3 liter Multijet turbo diesel with power output of 91bhp and torque performance of 209 Nm. Both the engines would be mated to a 5-speed manual transmission; sadly, there is no possibility of an auto transmission or an all wheel drive system, at least for the time being. Fiat is expected to price the Avventura crossover slightly more than the Punto EVO. Also, its India launch would also mark its global debut as the company intends to launch the Avventura in several other countries.