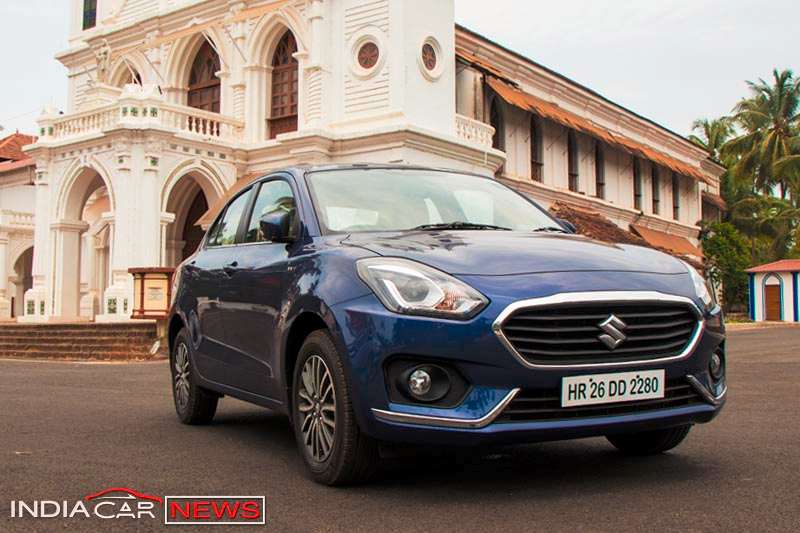 Tata Motors may have decoded the idea of sub four-meter sedan with its Indigo model, albeit the car that shot this segment to fame is Maruti’s Swift Dzire that joined in much later in 2008. With a product cycle spanning nine years, Maruti has sold a whopping 14 lakh units of Dzire.

Interestingly, it accounts for almost 50% of the total sales of the segment and slightly more than the lifetime sales of some auto giants. The company has now launched the new-generation Dzire that costs a little over its predecessor, whilst it offers additional kit and much more. We got a chance to drive the new Maruti Suzuki Dzire in the quaint city of Goa and here are our first impressions of the radically changed Dzire.

Vaulting over to the third-generation, Dzire sports a new design save for the side profile that bears some resemblance to the predecessor. With the addition of new elements up front, it appears more sorted, upmarket and sleek. The all-new four-slat grille with a dash of chrome looks impressive and the swooping headlamps with integrated LED DRLs sport a new design. Down on the bumper, it gets new fog lamps with chrome strips placed right below. Picture Gallery – New-generation Maruti Suzuki Dzire 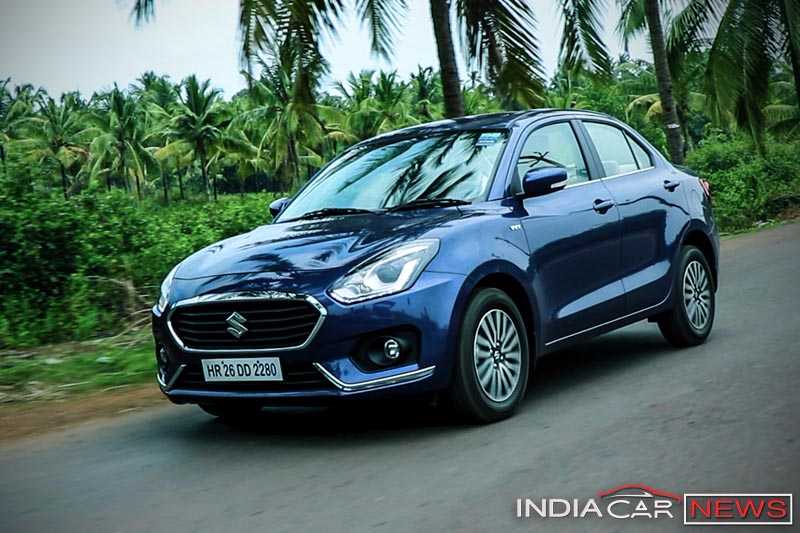 One of the prominent changes on the outside is the reworked rear profile that appears refreshing, well-proportioned and more upmarket than the previous one that looked stubby. To give it an entirely new look Maruti has added all-new panels, new taillamps with LED units and a sportier bumper. While the rear section is a far cry from the previous model, the car looks most attractive from front. As for the competition, Tata Tigor and Hyundai Xcent facelift get more appealing rear in the segment. 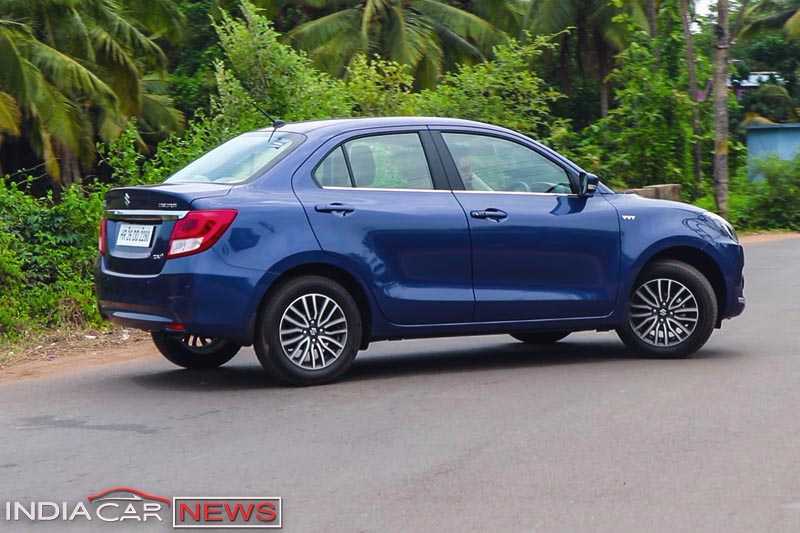 With almost all new elements, Dzire gets a completely new cabin. Quality of plastic on the dashboard has improved and it gets the same dual-tone black &beige colour palette with slightly different treatment to the beige on the lower side. Use of wood panels on the dashboard, doors and steering wheel infuse a premium touch. The flat-bottomed steering wheel with leather wrapping is sportier and more comfortable to hold, additionally it gets mounted telephony, voice command and mode (for operating infotainment system) buttons. In terms of practicality, it continues offering multiple utility points including the two bottle holders (small) on floor console, cubby hole etc, the glove-box, albeit is a tad cramped.

We were expecting a centre armrest on the new Dzire, although it is missing. In tandem with other new-age Maruti cars, this one also gets the 7.0-inch SmartPlay touchscreen infotainment system with Apple CarPlay and Android Auto support. What’s good about this system is that it is easy to understand and its touch response is clearly a notch up compared to rivals. Aside from above attributes, it comes with memory function, USB support, AUX-In and 12V power socket. Read – New Maruti Swift Dzire Vs Old Dzire – What is the difference? 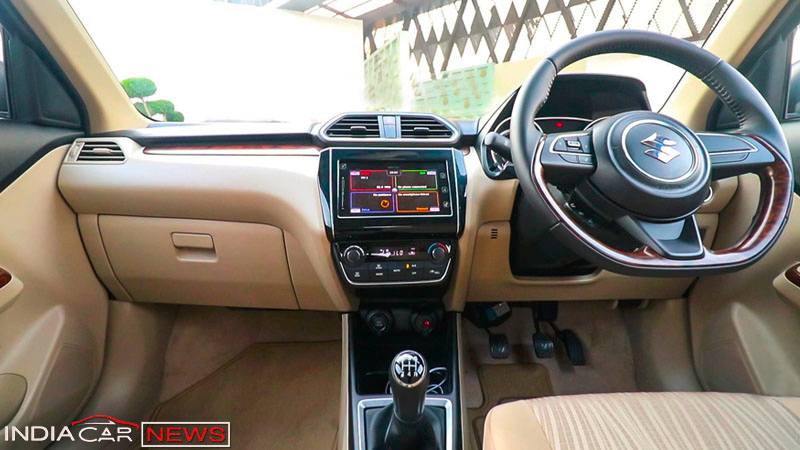 One of the strengths of the Dzire is the well-cushioned seats that remain intact in the new-gen model. For the comfort of driver, Maruti has equipped height adjuster that allows altering the height as per convenience. The increased wheelbase and width make more room at the rear. With these changes, the rear side offers more legroom, headroom and shoulder space to the occupants. That said the car can easily accommodate three passengers at the back. Another pleasant addition on the car is the new rear AC vents and a 12V rear power socket. The boot space with an additional capacity of 60-litres (376-litres) is more usable, wide and the loading lip is placed at the right height that further adds to its comfort. Read Comparison – Maruti Dzire Vs Tata Tigor

The new Dzire carries over the same 82bhp,1.2-litre K-Series petrol and 74bhp, 1.3-litre oil burner from the predecessor. While the five-speed manual gearbox is standard, the five-speed AMT unit is now also available with the petrol version, though it is missing in the base LXi&LDi trims. 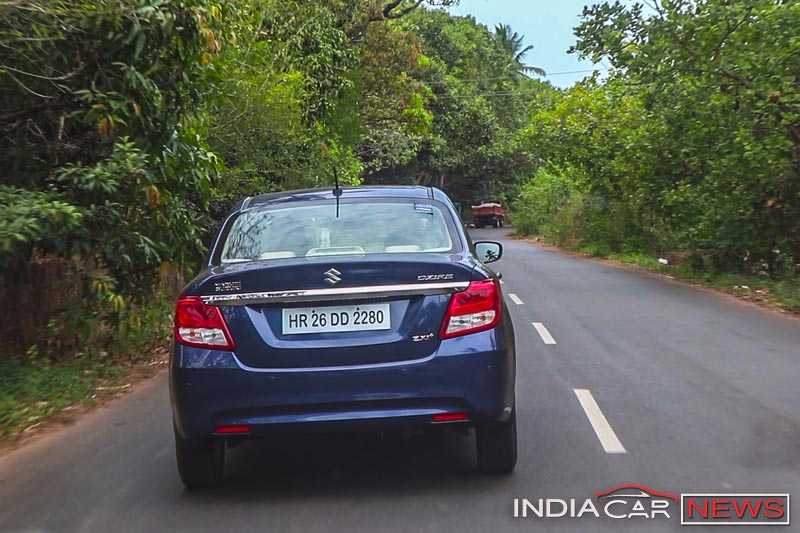 Based on Baleno’s‘Heartect’ platform the new Dzire is almost 100kgs lighter than its predecessor that makes it more exciting and smooth to drive. With reduced weight, it offers best-in-class power to weight ratio. Benefitting from the new platform, the sedan witnesses drastic change in terms of performance. While you hardly feel any turbo lag in the petrol model, it is slightly evident in diesel version, up to 2000rpm, whilst it is far better from the outgoing Dzire.

Suspension mechanism has also improved, it can easily absorb small pot holes and fares well on uneven roads and rough patches. The ground clearance has been dropped by 7mm and height has also been decreased that works well for its stability and overall drive experience. The steering is sportier, lighter and more responsive. Braking power is more robust, thanks to the new disc brakes, ABS and EBD. There is a notable change in the NVH levels even on the diesel engine that seems akin to its petrol version with hardly any noise. Read – Maruti Dzire 2017-The Journey Through Generations 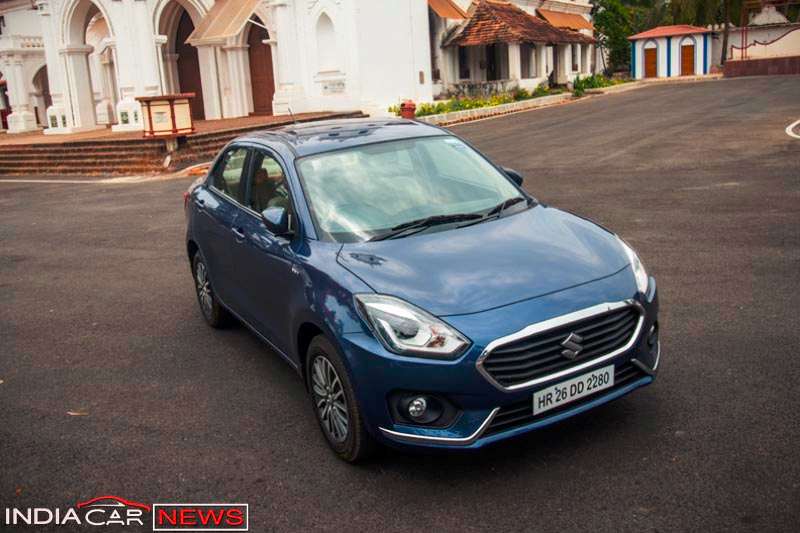 The new Dzire is visually more appealing, is better equipped and performs remarkably better than its predecessor. Overall, it is a much better package now, but we feel the ground clearance is low and although Maruti has increased the boot space by 60-litres, it is still far away from the competition.