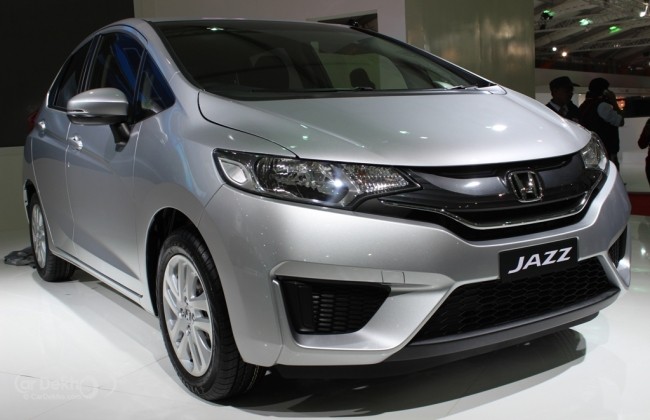 Japanese car manufacturer Honda will launch the new generation Jazz hatchback in the Indian car market. Set to be launched by the early next year, the vehicle, for the first time, will be offered with diesel powertrain. Unveiled at the 2014 Delhi Motor Show, the new Jazz will compete against the likes of Hyundai i20 and Volkswagen Polo. [Also Read: New Honda Jazz Vs Hyundai i20]

The new generation Honda Jazz gets evolved with time which has gone through a refreshing makeover and it comes with a more appealing design philosophy. Based on a new platform which also underpins the new gen City sedan; however, the company retains the cab forward design. The aggressive front fascia features thick horizontal chrome slat which is flanked by a hawk-eye shaped headlamps. Its hood gets two prominent creases which visually flow to merge the A-pillars. The lower bumper features wide airdam and a pair of fog lamps.

The new Jazz looks bigger than its predecessor and it features large glass area. Its side profile looks equally aggressive with crisp sewage line runs across the length of the car. At the back, the new Jazz looks like the toned down version from its elder sibling, the CR-V. The styling is appealing and is equipped with a chrome slat running across the rear. It also gets matte black vents on both the edges.

The Jazz hatchback is known for its spaciousness which is based on the Honda’s immensely popular “Man Maximum Machine Minimum” philosophy. The vehicle features large dashboard and is equipped with touch-screen system with navigation. The quality of material and fit & finish is top notch. It sports three-spoke steering wheel with music controls mounted on it. It also features push start and keyless entry. The vehicle has good knee room and head room space which is more than sufficient to accommodate for even six-footer. The rear seats of the hatchback can be fully foldable and form a flat bed, which improves the luggage carrying capacity.

The new generation Jazz will come in both petrol and diesel guise. While the gasoline version is powered by a 1.2-litre i-VTEC engine that produces 87bhp, the oil burner is propelled by the 1.5-litre i-DTEC engine producing 99bhp. Both engines will send power to front wheels via a five-speed manual transmission gearbox. However, the petrol version will also come with automatic gearbox.