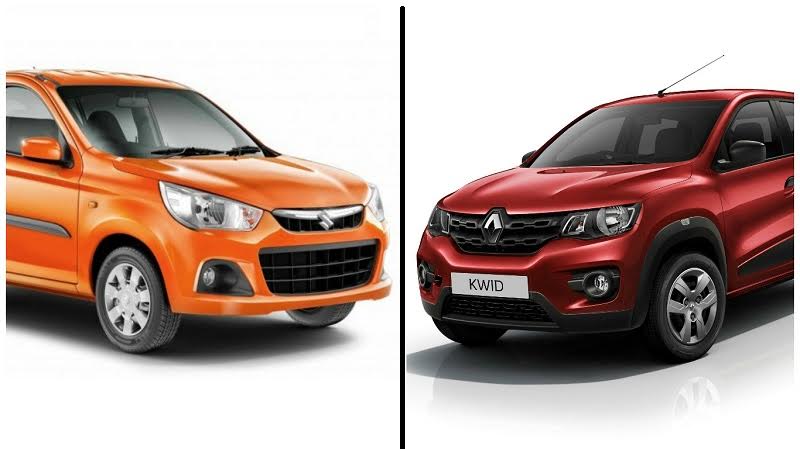 Renault Kwid 1000cc (1.0L) Vs Maruti Alto K10- Here is a spec based comparison between these two entry-level hatchbacks.

Buoyed by an excellent response for the Kwid 800cc, Renault India has launched the 1000cc version of the hatchback at Rs 3.82 lakh (ex-Delhi)  Since its launch in September 2015, the Renault Kwid has received an excellent response from car buyers as the small car commands a waiting period of around 6-9 months. The 800cc is giving strong competition to the country’s best selling entry level hatchback – the Alto 800. With 1000cc model, Renault India now aims to take on the likes of the Maruti Alto K10, Hyundai Eon 1.0, Maruti Suzuki Celerio and the Tata Tiago small car. The 1000cc model looks similar to the regular model, except for the few exterior tweaks and added features. Here we bring you a spec based comparison between the Renault Kwid 1000cc and Maruti Alto K10. 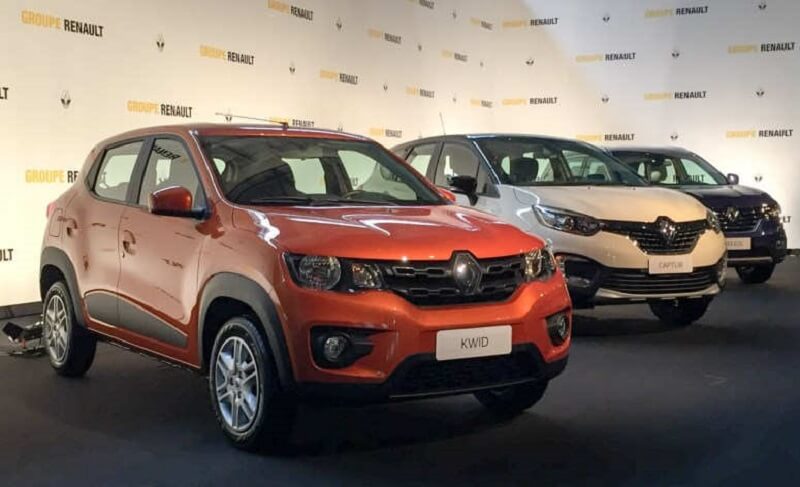 Powering the Alto K10 is a 998cc, 4-cylinder K10B petrol engine that also powers the Celerio and the Wagon R. This engine is capable of producing 67bhp of power at 6,000rpm along with a peak torque of 90Nm at 3,500rpm. A 5-speed manual gearbox driving the power to the front wheels come as standard, while an AMT (Automated Manual Transmission) is available as an optional on the top-end model.

Talking about Kwid, the entry-level hatch will be powered by a 1.0-litre SCe, 3-cylinder petrol engine that is capable of producing 67bhp of power and 91Nm of torque. Power will be transmitted to the front wheels via a 5-speed manual gearbox. The company will also launch an AMT version, but on later stage. 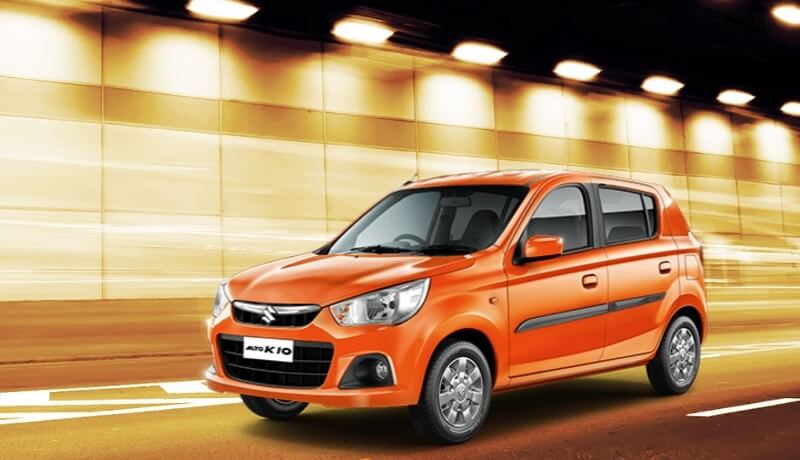 The new Alto K10 looks largely identical to its smaller engined sibling – the Alto 800cc. Talking about changes, the K10 comes with a larger chrome grille and upside down rectangular air intake, more prominent bonnet curves and sportier bumper. The K10’s side profile and rear too look similar to the 800, but the former gets flared wheel arches. Inside the cabin, the Alto K10 gets a piano black-coloured 2-DIN audio system with AUX, USB and CD player, dual-tone scheme, silver bezel finished air-con vents, driver side airbag, speed sensing door locks, central locking with key and front adjustable head-rests.

The Renault Kwid 1.0 comes in two grades- RxT and RxT (O). The RxT trim is basically the range-topping version of the regular 800cc Kwid, which is equipped with all the necessary features. The overall styling of the 1000cc model is similar to the regular model, except for the new 1.0 SCe badge and new body graphics. The top-end model is equipped with a 7-inch MEDIANAV touchscreen system, driver-side airbag, fog lamps, chrome-inserted instrument cluster, leather wrapped steering, parcel tray for rear occupants, central locking, front ‘Pro-Sense’ seat-belt pre-tensioners and few other features. The vehicle features gloss grey ORVM caps and black/White new decals on the lower portion of both sides that basically the few changes that helps differentiate it from the regular model. The French automaker is also offering several accessory options for the Kwid to its buyers at an extra cost, allowing customers to personalize the vehicle according to their needs. Compared to regular model, the 1000cc version features a passenger airbag, ABS, internally adjustable ORVMs and a digital tachometer.