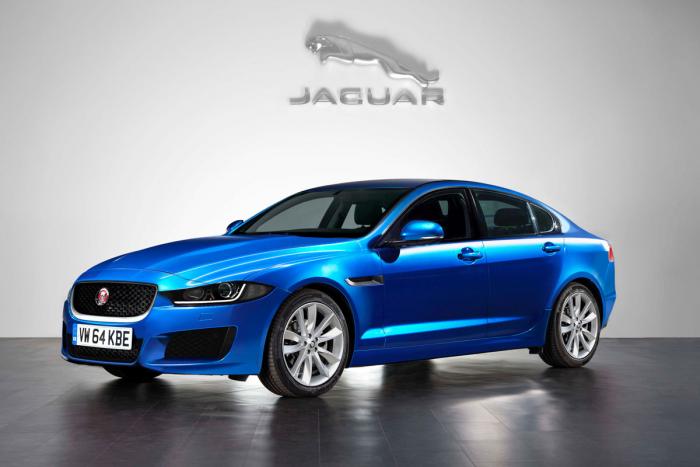 It has been a while since Jaguar XE sedan has been spotted during its test rounds, giving some glimpses about the design. Now, the new pictures and more details of the sedan, which is scheduled to be unveiled at the 2014 Paris Motor Show, have been revealed on web. With this product, Jaguar will mark its official entry into the small sports sedan segment which is currently dominated by the Germans- BMW 3 Series, Audi A4 and Mercedes-Benz E-Class. The pictures suggest that the Jaguar XE sedan gets a semi notchback design. The vehicle gets long sculpted hood at the front, while the stubby boot characterized the rear profile.  It largely resembles the XF saloon, while the side and rear profile looks closer to the sportier F-Type. The vehicle gets aerodynamic lines on the sides and dual exhaust pipes at the back. This sports sedan gets the familiar Jaguar fascia which looks like a toned-down version of the bigger Jaguar’s. It is equipped with a rectangular grille which is complemented by swoopy headlights. The model gets angled beltline and a small boot with an integrated rear spoiler. Inside the cabin, the XE sedan is expected to share its components and styling with the XF and the XJ; however, the company might ditch some of the features to achieve aggressive pricing. Jaguar reportedly working on a new infotainment system which will be fixed to this model as well as other Jaguar’s as well.

The Jaguar XE will be the first car to use the new iQ[AI] advanced aluminium architecture, which will also underpins the Jaguars future products including C-X17 based crossover. The vehicle will be powered by the high performance 3.0-litre V6 engine that produces two power states- 340bhp and 380bhp. It will also get a new range of more economical petrol and diesel engines including 1.8-litre-2.5-litre. All the engines are likely to get the ZF eight-speed automatic transmission gearbox, which sends the power to the rear wheels or to all four-wheels.