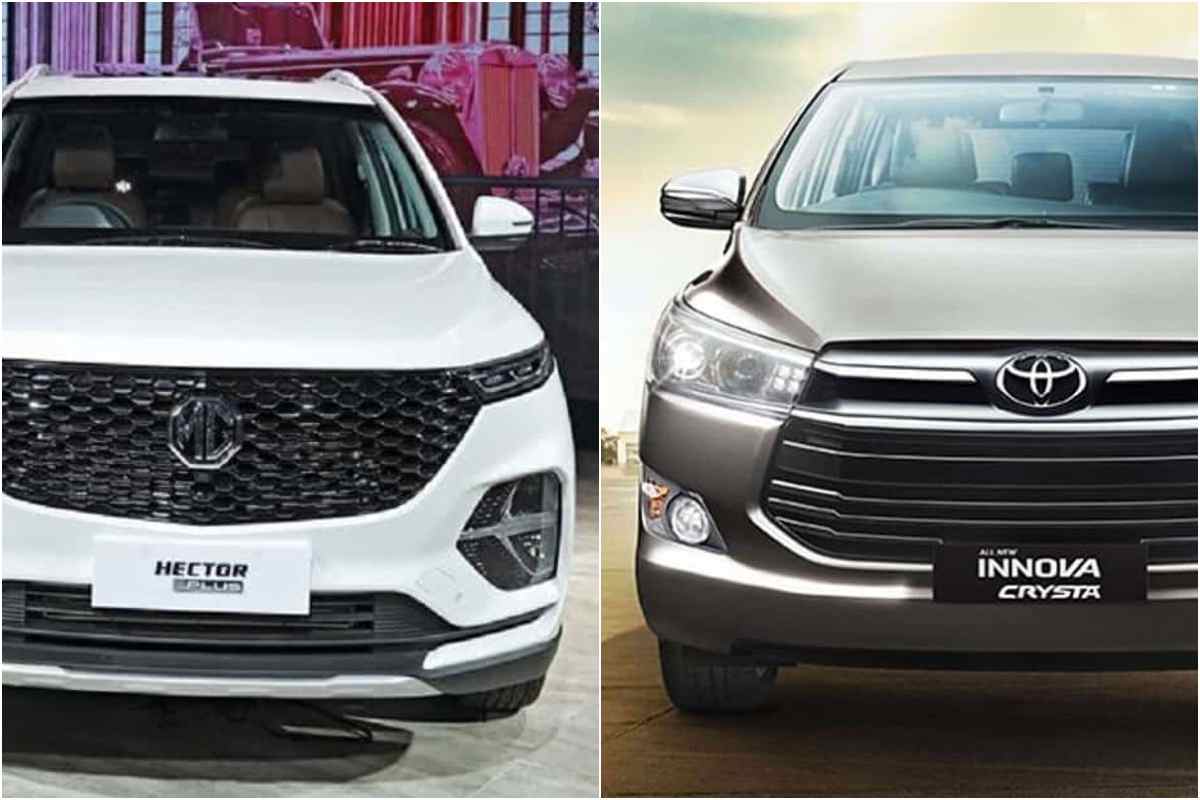 MG Motors has entered into the 6-seater SUV segment with the new Hector Plus. It is available in 6-seat options; however, the 7-seater model will join the line-up at a later stage. The new model will directly rival the upcoming Tata Gravitas and the next-gen Mahindra XUV500. However, MG Motors is aiming to pitch the new Hector Plus against the country’s most popular MPV – the Toyota Innova Crysta. In this article, we will compare the engine specs, features and other details of the Toyota Innova Crysta and the MG Hector Plus.

Hector Plus Vs Innova Crysta Price

The Hector Plus is also available in petrol and diesel fuel option. The petrol range starts at Rs 13.49 lakh and goes up to Rs 18.21 lakh, while the petrol hybrid version costs Rs 17.29 lakh. The diesel model is priced at Rs 14.44 lakh for base model and Rs 18.54 lakh for the top-end variant. Also See – Tata Gravitas Vs MG Hector Plus

Hector Plus Vs Innova Specifications

The MG Hector Plus shares the engine specifications from the 5-seater Hector. It is powered by a Fiat-sourced 2.0-litre MJD II turbocharged diesel engine. This 4-cylinder turbo engine is capable of producing 170bhp of power and 350Nm of torque. Power is be transmitted to the front wheels via a 6-speed manual gearbox. MG has also introduced the petrol powered Hector Plus, which features the same 143bhp, 1.5-litre turbocharged petrol engine. Transmission choices include a 6-speed manual and a 6-speed DCT. The petrol version is also available with a 48V mild hybrid technology with manual gearbox only.

Hector Plus Vs Crysta Dimensions

Hector Plus Vs Crysta Features

The MG Hector Plus shares most of its components and features with the 5-seater SUV. It sports a 10.4-inch portrait touchscreen infotainment system, MG’s in-car connectivity technology and a panoramic sunroof. This SUV gets ‘Leg Swipe’ boot opening feature, which allows opening the tailgate by waving a foot below the rear bumper. The SUV also receives design changes in the form of new headlamps, updated bumper, new grille, new skid plates and revised rear taillamps. In terms of features, the Hector Plus gets power adjustable front seats, cruise control, a 360 degree camera, air-con vents and USB charging port for the third row passengers. The SUV shares the safety features with the Hector, and the 6 airbags is offered with the top-spec model.

The MG Hector Plus is a six-seater SUV, which has captain seats for the second row. The Innova Crysta is available with captain as well as bench-type second row of seats depending on the variant. Both models get split-folding third row seats.