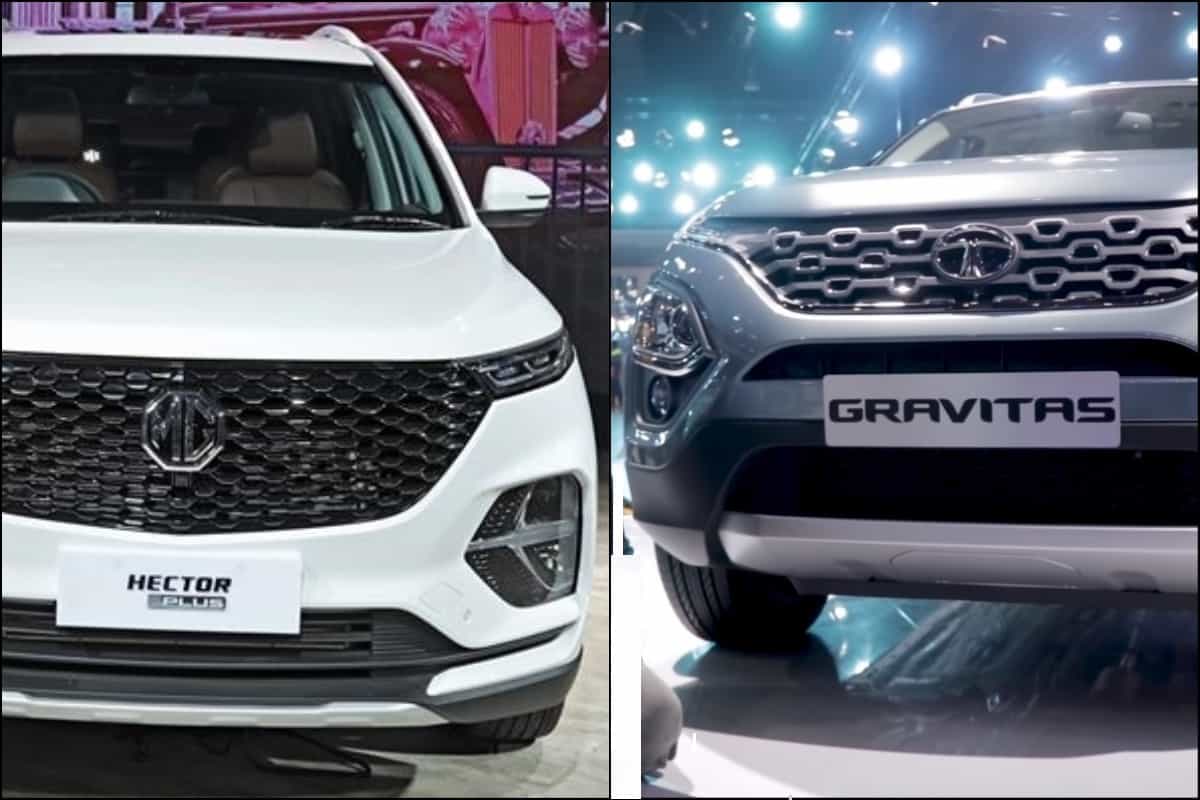 Tata Gravitas is surely one of the much-awaited launches of this year. The SUV was previewed at the 2020 Auto Expo, and is slated to go on sale during festive season. Once launched, it will take head-to-head against the upcoming MG Hector Plus that’s due for June 2020. Here, we have made a specification based comparison between these two SUVs.

Based on the Harrier 5-seater SUV, the Gravitas will share its powertrain with its donor sibling. Under the hood, the vehicle will house a 2.0L, 4-cylinder diesel engine meeting the BS6 emission norms. The oil burner can be had either with a 6-speed manual gearbox or a 6-speed torque convertor automatic transmission. It’s capable to deliver a maximum power of 170bhp against 350Nm of torque. The SUV comes with three driving modes – Eco, City and Sport and its Terrain Response system offers three modes – Normal, Wet and Rough. Rumour also has that Tata is working on an all-new 1.5L turbo petrol engine that will be soon introduced on the Harrier lineup. The same powertrain might also be offered on the Gravitas.

MG Hector Plus, which is based on the Hector 5-seater, will be made available with three engine options – 1.5L turbo petrol, 1.5L petrol with 48V mild-hybrid technology and 2.0L diesel. Paired to a 6-speed manual gearbox, the oil burner makes a top power of 170bhp against 350Nm of torque. The turbo petrol unit is good enough for 143bhp and 250Nm of torque. Similar to the 5-seater Hector, it can be had either with a 6-speed manual or a 6-speed automatic gearbox.

The Tata Gravitas is expected to be as frugal as its younger sibling. In the Harrier, the 170bhp, 2.0L diesel motor returns a claimed fuel economy of 17.0kmpl with both manual and automatic gearbox.

Sharing its powertrain with the Hector, the Hector Plus diesel will deliver a mileage of 17.41kmpl. Its turbo-petrol and petrol hybrid versions will promise 14.16kmpl and 15.81kmpl respectively.

The new 6/7-seater SUV from Tata will share most of its features with the Harrier 5-seater. It gets a free-floating infotainment system with Apple CarPlay and Android Auto connectivity. In between the front seats, you will get cupholder along with the buttons for electronic handbrake and auto hold. The dashboard and steering wheel are carried out from the Harrier. Features such as keyless entry, cruise control, push button start, a panoramic sunroof and electric adjustable driver’s seat will also be on offer.

Similarly to the Gravitas, the MG Hector Plus will borrow most of its components with its donor sibling. The 6-seater SUV will have a 10.4-inch portrait touchscreen infotainment system, MG’s in-car connectivity technology and a panoramic sunroof.

The overall length, width and height of the MG Hector Plus stand at 4695mm, 1760mm and 1835mm respectively. The 6-seater SUV is 40mm longer than its younger sibling. The width and height remain unchanged.