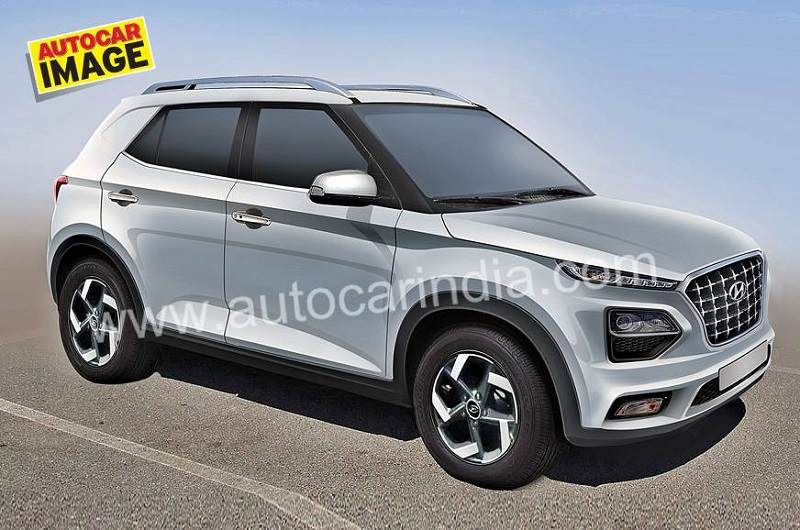 We informed you earlier that Hyundai will launch the Carlino concept based sub-4 meter SUV in India in 2019. Codenamed QXi, the compact SUV is reportedly to be called Hyundai Styx. If latest media report is to be believed, the Hyundai QXi will go on sale in India in March 2019. Testing of the SUV has already been commenced in India as well as overseas. The report further suggests that the new small SUV features Hyundai’s latest design philosophy.

The Hyundai QXi will feature a wider cascading grille, which is the brand’s signature grille. It also gets Hyundai’s new Composite Light, where the headlight is placed next to the grille and a separate LED daytime running light is positioned above it. The vehicle will share several design cues from the global Hyundai SUVs including Kona and Santa Fe. On the sides, the SUV has large glasshouse area for front and rear passengers that also resemble the new breed of Hyundai cars. The SUV gets flared wheel arches to give off-road looks. The rear design is likely to be simple, which is expected to share design cues from Hyundai Creta. Also See – Hyundai Carlino With 118bhp Turbo Petrol Engine Coming Soon

The cabin of the Hyundai QXi will be inspired from the Creta. The SUV will have premium interiors and decent legroom space. The dashboard is likely to get a large touchscreen infotainment system with smartphone connectivity features. The Hyundai QXi will come with a range of BS-VI compliant petrol and diesel engines. It will be powered by all-new 1.0-litre turbo petrol engine producing 118bhp and 171Nm of torque. Additionally, the SUV will also mark the debut of all-new 1.5-litre diesel engine that is expected to produce around 115bhp and 250Nm of torque. Also See – Hyundai Carlino Compact SUV Spotted Testing

This will be Hyundai’s smallest SUV in India. It will rival the likes of Maruti Vitara Brezza, Tata Nexon, Ford EcoSport and the upcoming Mahindra S201.