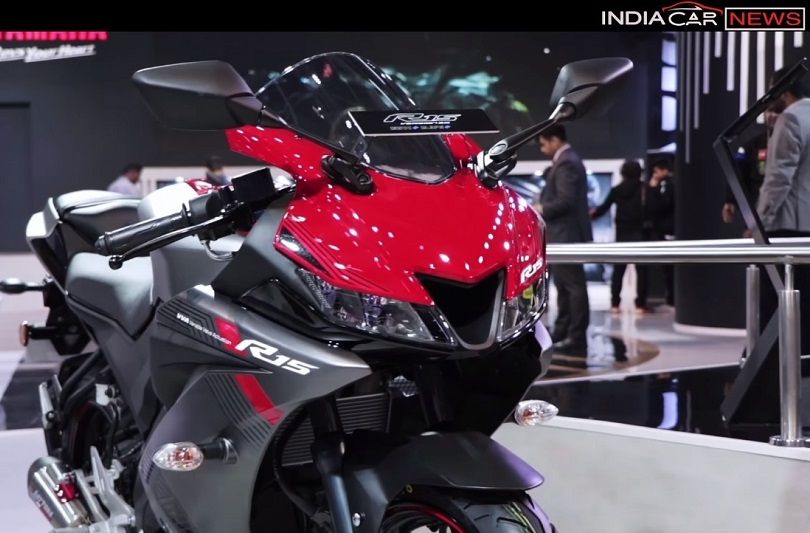 Yamaha had rolled out the 2018 Yamaha R15 V3 in the Indian market at the 14th edition of Delhi Auto Expo. While the bike was initially made available in a single variant priced at Rs 1.25 lakh, after the price hike it costs Rs 1.27 lakh. All prices are ex-showroom, Delhi. At this price point, the new Yamaha YZF R15 V3 goes up against the Honda CBR150R and the Suzuki GSX 150R. The new 2018 Yamaha R15 V3.0 receives multiple aesthetic changes and feature upgrades. Besides this, the 2018 model year of the popular full-faired motorcycle gets a more powerful and refined powertrain.

Design and styling of the India-spec 2018 Yamaha R15 V3 looks similar to the global model. Though, it misses out on some premium features. Unlike the global model that comes equipped with USD forks and ABS, the India-spec model has conventional telescopic forks. It also misses out on ABS, but the bike gets slipper clutch which is claimed to reduce clutch force by 18%. Sitting on a shorter wheelbase, the new 2018 Yamaha YZF-R15 V3.0 derives its power from new 155.1cc engine benefited with the VVA (Variable Valve Actuation) technology. Read – New Yamaha R15 V3 vs Old R15 – What’s The Difference?

The Japanese bikemaker will soon introduce the Yamaha R15 V3 MotoGP edition in the country. Rumor also has it that the bike will also get a new colour scheme, which is expected to be offered at a dealership level. The company might also add an ABS version of the R15 sometime next year. 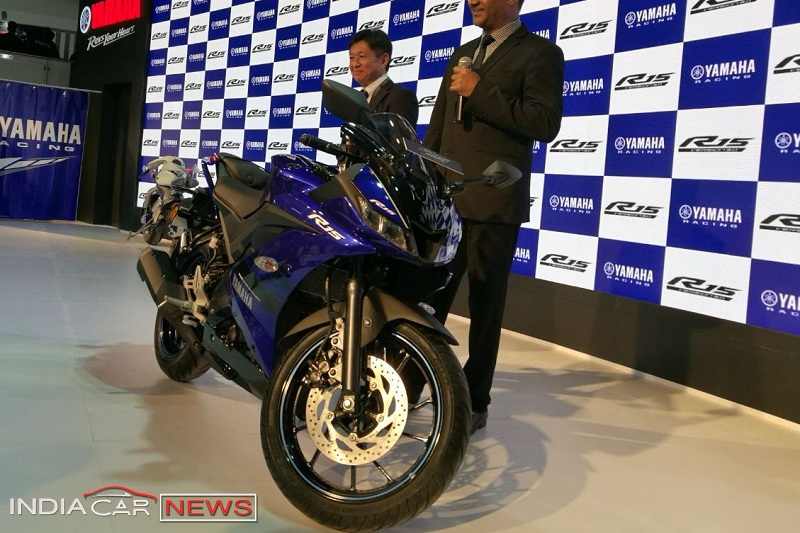 Along with the comprehensive design and styling updates, the new 2018 Yamaha YZF-R15 V3.0 receives mechanical changes and an additional kit. Unlike the global model that comes with several high-end features such as upside-down forks and Pirelli tyres, the India-spec model is devoid of them. It has helped the bikemaker achieve aggressive pricing. While the new 2018 Yamaha R15 V3 was introduced at Rs 1.25 lakh, it’s currently available at Rs 1.27 lakh (all, ex-showroom Delhi). That means, the full faired bike witnessed a price hike of Rs 2,000. Read More About – Yamaha Saluto RX | Yamaha M Slaz (MT-15)

Most of the design and styling bits of the new 2018 Yamaha YZF-R15 V3.0 are carried over from the bigger Yamaha R series motorcycles including R1 and R6. The India-spec model shares strong resemblance to its global version. The bike gets a newly developed fairing and twin-seat layout. With new full-fairing and several new elements, the fully-faired motorcycle has witnessed some increase in weight.

The global spec model weighs 137kgs, thus making it 1kg heavier than the R15 V2. Though, one of the major update comes in the form of revised Delta Box featuring an all-new aluminium swingarm. Yamaha engineers have raised the seating position of the bike for improving its riding comfort and experience. Upfront of the 2018 Yamaha YZF R15 V3.0 looks aggressive thanks to its new, sharper dual-split LED headlamp. Design elements such as new body panels, USD front forks and LED rear lights round off changes on the bike. 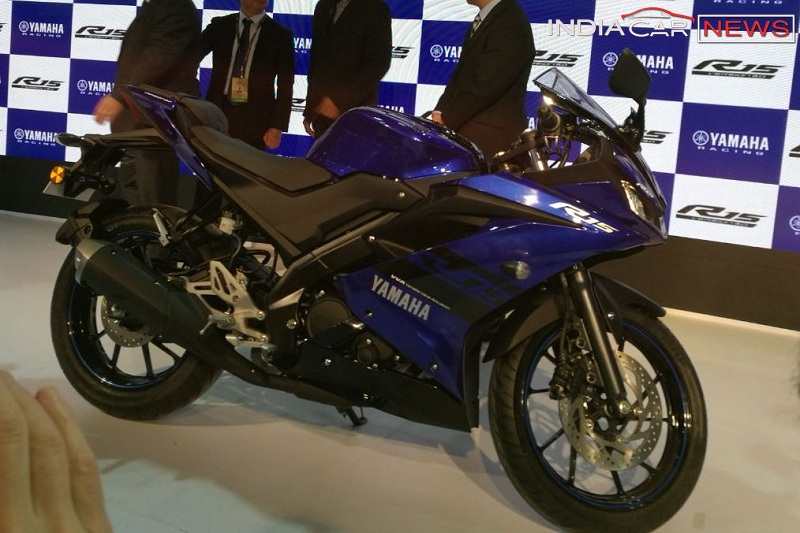 While the global model is equipped with premium upside-down front forks, the India-spec model comes fitted with the conventional telescopic forks unit. This has helped the automaker to reduce the pricing of the motorcycle. The bike’s new model is assembled with the regular MRF tyres.

Ditching the analog instrument console, the 2018 Yamaha R15 V3 gets a new digital unit with blue colour backlights. The aerodynamically designed body fairing offers better thigh and chest support. In line with its sporty appearance, the bike also receives sculpted fuel tank with 11-litres of capacity. Some of its bits such as the pillion seat, wheel design and exhaust are borrowed from the M-Slaz, whereas other bits are taken from the larger YZF-R6. The new 2018 Yamaha YZF R15 V3.0 also gets an optional ABS system. Read: Yamaha Cygnus Ray-ZR – All You Need To Know 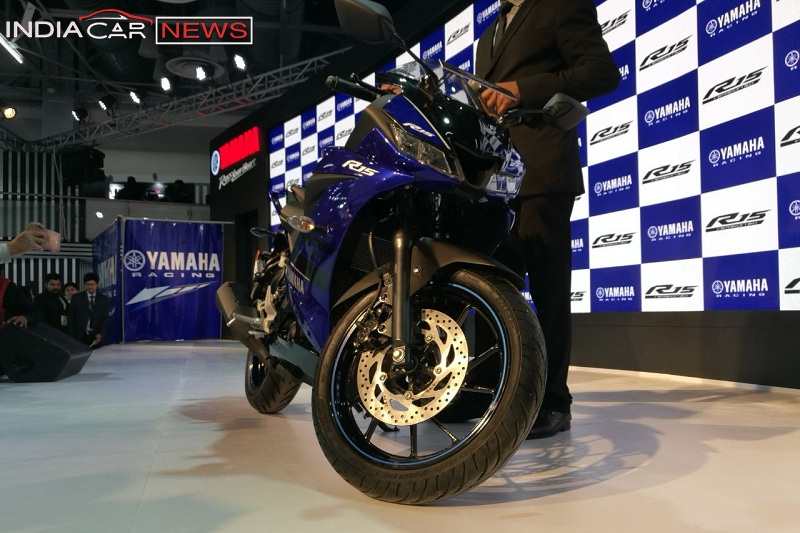 As mentioned above, Yamaha’s popular fully-faired entry-level motorcycle has been propelled by an all-new 155.1cc engine. This single-cylinder, liquid-cooled, 4-stroke motor is boosted with Yamaha’s Variable Valve Actuation (VVA) and Single OverHead Cam (SOHC) technology. Sitting on a lighter platform and lower wheelbase, the new model is claimed to be more powerful and fuel efficient than the old unit.

The new motor delivers a claimed power of 19.04bhp at 10,000rpm, while producing a peak torque of 14.7Nm at 8,500rpm. Featuring forged piston and lighter DiASil (Direct Aluminium Silicon) cylinder, the new motor is claimed to be more durable. With these changes, the engine returns better fuel efficiency. Transmission duties on the bike are performed by a newly developed six-speed gearbox.

Power-packed with the new 155.1cc engine, the 2018 Yamaha YZF R15 V3.0 is more frugal in nature than the previous model. As mentioned above, the powertrain has been tuned for delivering better fuel economy. With the changes, the R15 V3 returns a mileage around 40kmpl in city and 46kmpl on highways. 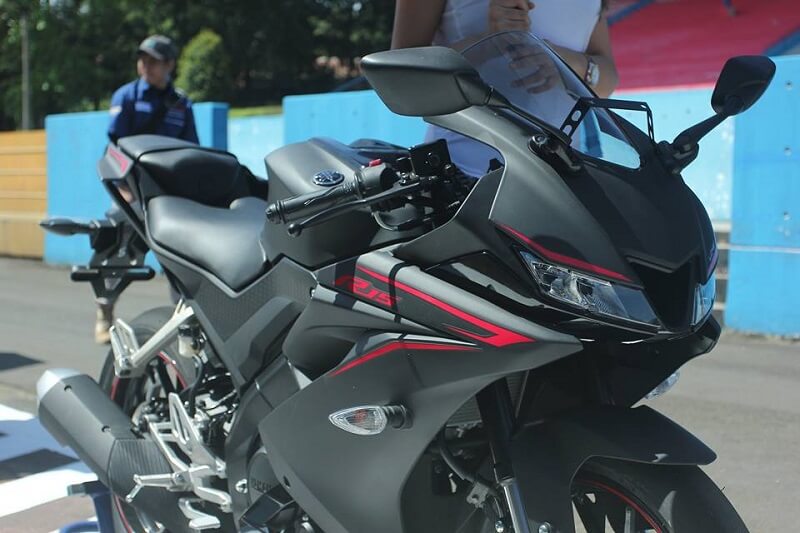 The new motorcycle can attain a maximum speed of 140kmph. With this figure, it becomes nearly 15-20kmph faster than its predecessor.

For performing suspension duties, the new R15 gets the standard telescopic forks upfront and monoshock absorber at the rear. One must note that the bike’s global model comes with more premium upside-down forks and slipper clutch. The 2018 Yamaha YZF R15 V3.0 sources its braking power from 282mm up front and 240mm rear disc brakes. While the global model is available with ABS (Anti-Lock Braking System) and slipper clutch as standard, the India-spec model gets ABS as optional. Read – Yamaha MT-03 – Launch Details, Estimated Price & Pictures

Buyers are available with two colour schemes with the new 2018 Yamaha YZF R15 V3.0, namely, Thunder Grey and Racing Blue. One must note that the above shades are offered with Red and Black combinations. 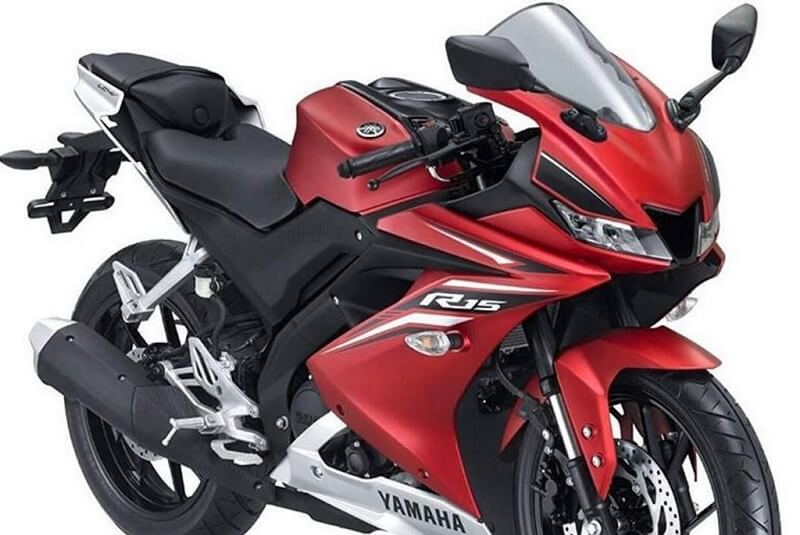 Yamaha’s R15 V3 has finally vault over to a new generation in India. Prominent changes on the bike include styling updates along with additional features and mechanical tweaks. Ditching the old power unit, the bike gets a more powerful 155.1cc single-cylinder motor with VVA technology. It’s also high on fuel efficiency and refinement. Although, with the addition of full-fairing, the entry-level bike has witnessed some increase in weight. Some of the elements and features are carried over from the larger YZF-R6 model, which several prominent styling bits reminiscent of the M-Slaz. With these cosmetic changes and new 155.1cc engine, the 2018 Yamaha YZF R15 V3.0 looks sportier and sharper than the previous model. While in terms of pricing, the minimal difference between the two models, though there is slight increase in price.