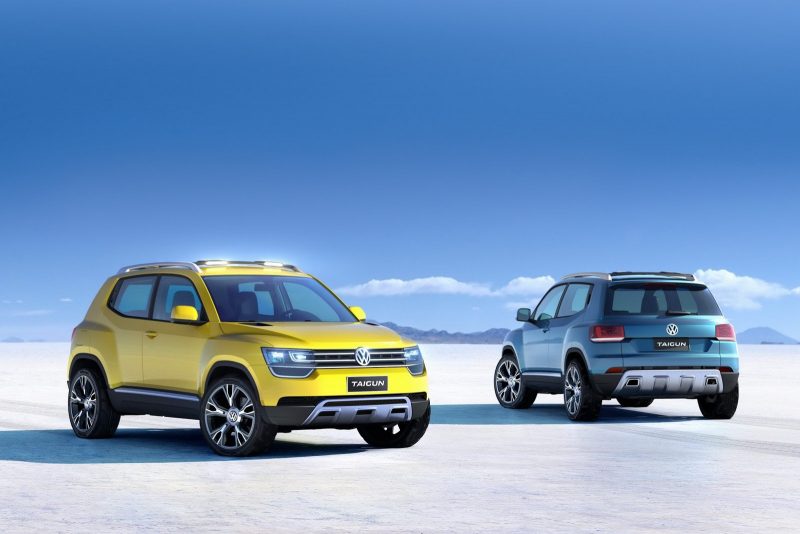 Volkswagen India will showcase the production version of the Taigun compact SUV at the 2014 Delhi Motor Show, next month. The company had unveiled the concept at the Sao Paulo Motor Show in 2012, and the production version is likely to hit the showrooms in 2015-16. It will compete against the likes of Ford EcoSport, Renault Duster, Nissan Terrano and others.

Based on the new Up! platform, the Volkswagen Taigun is a compact SUV which measures 3.86 metre in length and 1.73 metre in width. This compact SUV has a large 2.47 metre of wheelbase, which turns into a roomy cabin. In the international markets, Volkswagen Taigun will get the 1.0-litre turbocharged 3-cylinder direct injection gasoline engine that produces 209bhp. However, for the Indian buyers, it is expected to be powered by the 1.2-litre TSI petrol engine, and the 74bhp, 1.2-litre diesel engine. The petrol mill will be paired to either a six-speed manual or the DSG automatic, while the oil burner will come mated to a manual gearbox.

The Taigun will be assembled at the Volkswagen’s two production plants. For the left hand drive nations, it will be produced at the Sao Paulo, Brazil, and the right-hand drive Taigun for the countries like India will be developed at its Pune manufacturing unit. This compact SUV features the rugged side panels, underbody panel, sporty roof rails with LED spotlights, which resembles to Tiguan and Touareg.

Volkswagen’s high driving seat will offer a good look of traffic to its driver, and with a large trunck capacity its utility has also increased. With 280-litres of luggage carrying capacity, which can be increased up to 987-litres with rear seats down, one can carry more than their daily bags.

Since the Taigun will compete against the likes of EcoSport and other upcoming Sub-4 metre SUVs, expect its price to be around Rs 6-7 lakh. However, the company hasn’t yet made any officially statement on this.