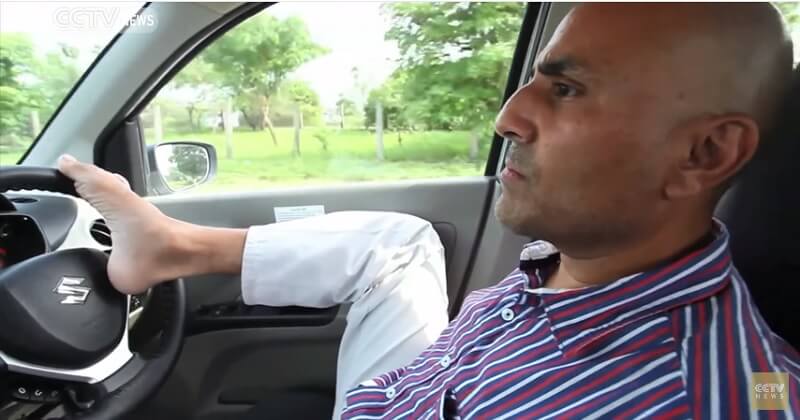 In his words, driving makes him feel liberated. Speaking to TOI “I used to have a full-time driver. But then I realised… you cannot depend on anyone for your basic needs,”

Disability is only a state of mind to Vikram Agnihotri, who has become the first Indian without arms to get a permanent driving license. The 45-year old motivation speaker and a businessman from Indore had lost both of his arms in an accident at an early age of 7. All thanks to his will and passion, he can today drive his car quite comfortably with both of his legs.

In his words, driving makes him feel liberated. Speaking to TOI “I used to have a full-time driver. But then I realised… you cannot depend on anyone for your basic needs,”

Mr. Vikram Agnihotri got his learner’s license in May 2015, and then applied for the permanent one in October 2015. To get the permanent license, he went through a rigorous driving test on a heavy-vehicle track; but his application was first rejected by the authorities. Upon asking the reason behind rejection of the driving license, he was told that he cannot give hand signals while driving. He then approached the Gwalior based transport commissioner’s tribunal. “I was told my car was not designed according to a differently-abled person’s needs. But modifying a car in this manner is not common,” said Agnihotri.

He then got his car modified to meet the RTO requirements and then met Nitin Gadkar and petitioned several state ministers. On September 30, he finally got his license under “invalid carriage” category. Ever since he received his learner’s license, he has driven over 14,500kms without any mishap. He now wishes to drive to Leh.