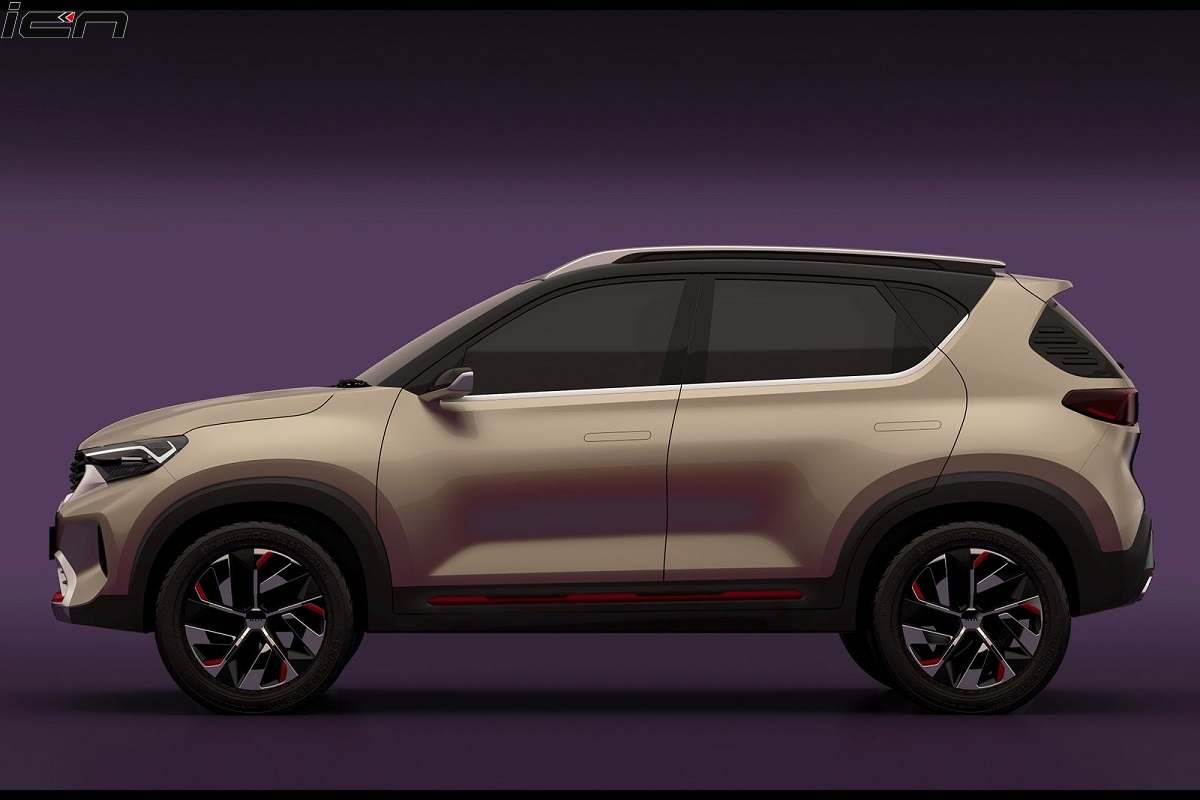 The changing dynamics in the Indian automobile fraternity is leading it towards a market driven primarily by SUVs. Priced higher than the mainstream models, the full-size SUVs were somehow unreasonable for the price sensitive Indian customers. In a bid to cater to the mass customers, car giants came up with the compact SUVs that have become a rage now. With models like Ford EcoSport, Maruti Vitara Brezza and several others, the segment has gained traction and more new models are being introduced. For all the SUV enthusiasts planning to buy a budget SUV, we bring you a complete list of the upcoming compact SUVs in India in the next 2 years.

The first model in our list of the upcoming compact SUVs is the Tata HBX concept based micro SUV. Unveiled at the 2020 Auto Expo, the HBX micro SUV is based on the ALFA modular platform that also underpins the Altroz premium hatchback. It is designed on the IMPACT 2.0 design language, which we have already seen on the Altroz and the Harrier. Measuring around 3.8 meters in length, the HBX micro SUV will directly rival the Maruti Ignis and the Mahindra KUV100 NXT. This small SUV will be powered by a 1.2-litre, 3-cylinder Revotron petrol engine producing 85bhp and 110Nm of torque. Transmission choices will include a 5-speed manual and an AMT unit.

The Kia Sonet is one of the most awaited upcoming compact SUVs of India. Based on the Hyundai Venue’s platform, the sub-4 meter SUV will rival the likes of the Tata Nexon, Ford EcoSport, Mahindra XUV300, Maruti Vitara Brezza and the Hyundai Venue. The small SUV comes equipped with several high-end features including panoramic sunroof, segment-largest 10.25-inch touchscreen infotainment, UVO Connect, wireless charging, automatic AC and others. The Sonet sub-4 meter SUV will be offered with 3 engine options – a 83bhp, 1.2L naturally-aspirated petrol, a 118bhp, 1.0L turbocharged petrol and a 99bhp, 1.5L diesel.

Next in our list of upcoming compact SUVs is the Nissan Magnite sub-4 meter SUV, which is scheduled to be launched in India in mid-2020. Codenamed EM2, the small SUV will be developed on the CMF-A+ platform that also underpins the Renault Triber. The small SUV will share the styling cues from the Kicks and the bigger Nissan SUVs. It is rumoured to be the most affordable model in its category with starting price expected below Rs 6 lakh. The Magnite will be powered by a 1.0-litre, 3-cylinder turbocharged petrol engine producing 99bhp and 160Nm of torque. Transmission choices will include a 6-speed manual and a CVT automatic.

French automaker, Renault will launch an all-new compact SUV, codenamed HBC in India in mid-2020. Based on the locally-developed CMF-A+ platform, the Renault HBC will challenge the Tata Nexon, Ford EcoSport, Mahindra XUV300 and others. Rumoured to be called the Kiger, the sub-4 meter SUV will be powered by a 1.0-litre turbocharged petrol engine producing 99bhp and 160Nm of torque. Both manual and automatic gearbox options will be on offer.

Japanese automaker is developing a sub-4 meter SUV for the highly competitive Indian auto industry. The small SUV will be a global SUV and will be based on the new-gen City platform. In India, the company could use the new-gen Amaze’s 2UA platform, which is versatile enough to accommodate different type of body styles and products. It is expected to be launched in 2021. The vehicle is expected to be powered by a 1.5-litre petrol and a 1.5-litre diesel engine.

American automakers, Jeep has announced that it will launch a sub-4 meter SUV based on Fiat Panda’s 4×4 platform in 2021-22. This model will first go on sale in India, followed by other nations. Not much has been revealed on the technical details of the SUV, but it is expected to get the new 1.5-litre diesel and de-tuned 1.3-litre petrol engine. Both manual and automatic versions are likely to be on offer. To be positioned below Renegade, the Jeep’s small SUV will directly rival the Mahindra XUV300, Ford EcoSport, Tata Nexon and Maruti Vitara Brezza. It will be the equipped with all-wheel-drive system.

Toyota and Maruti Suzuki has joined hands to develop India-centric products, platforms, electric cars and technologies. Maruti Suzuki will also help Toyota to improve sales in the mass-segments. The Indo-Japanese brand will provide the Vitara Brezza to Toyota. The later will re-badge the Brezza to enter into the sub-4 meter SUV segment. The compact SUV from Toyota is expected to arrive in late 2020 or early 2021. It will be powered by a 1.5-litre K15B petrol engine producing 103bhp and 138Nm of torque.

American automaker, Volkswagen had showcased the Taigun SUV concept at the 2020 Auto Expo. The compact SUV will be launched in the first half of 2021. It is based on the heavily localised MQB AO IN platform, which will also underpin the next-gen Vento and the next-gen Polo. The SUV will take on the likes of the Hyundai Creta, Kia Seltos and the Nissan Kicks. It will be offered with 2 engine options – a 1.0-litre, 3-cylinder turbocharged petrol and a 1.5-litre, 4-cylinder turbocharged petrol. While the former is good for 115bhp and 200Nm, the 1.5L engine produces 148bhp of power and 250Nm of torque.

At the 2020 Auto Expo, Skoda had showcased the Vision IN SUV concept. The company has officially announced that the production version of the SUV will be launched in the first quarter of 2021. It will challenge the likes of the Hyundai Creta, Kia Seltos and the Nissan Kicks. The SUV will be offered with 2 engine options – a 115bhp, 1.0L turbocharged petrol and a 148bhp, 1.5L turbocharged petrol. Transmission choices will include a 6-speed manual, a 6-speed torque convertor automatic and a 7-speed DSG automatic.

Tata Motors is also readying an all-new compact SUV, which will be positioned between the Nexon and the Harrier SUV. Codenamed Blackbird, the SUV is rumoured to be based on the Chinese Chery Tiggo 5X. It’s likely to carry Tata’s new Impact 2.0 Design language with elements such as a slimmer grille with 3D Humanity line, large headlamps with LED DRL, tri arrow shaped fog lamps and pronounced hood. It is expected to be offered in 3 engine options – a 1.2L turbocharged petrol, a 1.5L petrol and a 1.5-litre turbocharged diesel.

Buoyed by excellent response for the electric ZS, MG Motors is now planning to launch the petrol-powered ZS SUV. The new model will challenge the likes of the Hyundai Creta, Nissan Kicks and the Kia Seltos. In the international markets, the MG ZS petrol is available in 2 engine options – 1.5-litre naturally aspirated petrol and 1.0-litre turbocharged petrol – producing 104bhp/141Nm and 109bhp/160Nm respectively. Power is transmitted to the front wheels via a 6-speed automatic gearbox.

Next in our list of upcoming compact SUVs in India is the Hyundai AX sub-compact SUV, which will be positioned below the Venue compact SUV. The small SUV will challenge the likes of the upcoming Tata HBX and the Maruti Ignis. It will be based on the Santro’s platform. The Hyundai AX is reported to come with a 1.0L, 3-cylinder petrol engine. The carmaker might also use the Santro’s 1.1L, 4-cylinder engine with a 5-speed manual and a 5-speed Smart Auto AMT gearbox.

French automaker, Groupe PSA has confirmed that the first Cirteon SUV in India – the C5 Aircross will be launched in Q1, 2021. The company will also launch an all-new sub-4 meter SUV, codenamed C21 in the end of 2021. The sub-4 meter SUV will be designed and developed on the CMF modular platform, which will also underpin an all-new sedan and a premium hatchback. It will be offered in 3 engine options – a 1.2L petrol, a 1.2L turbocharged petrol and a 1.5L diesel.