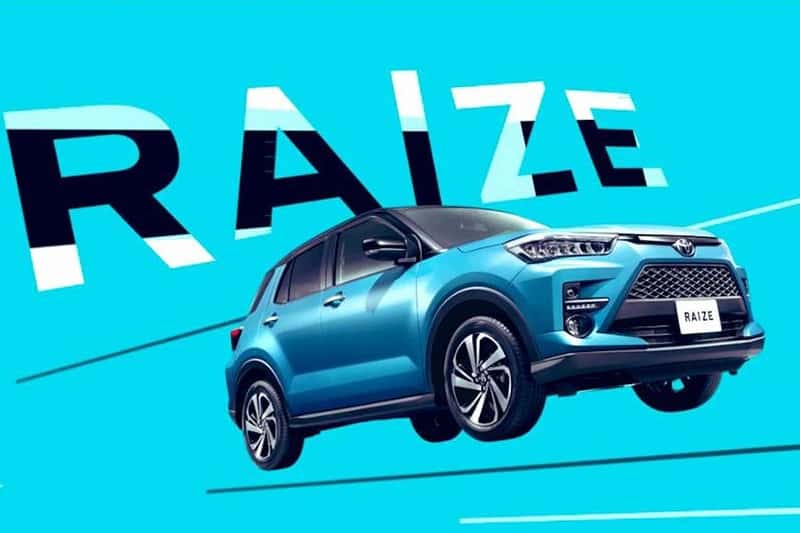 Toyota Raize subcompact SUV is ready to make its world debut next month. Ahead of its official unveiling, the first pictures of the vehicle have emerged on the web. The Raize shares most of its design elements and features with the Daihatsu Rocky along with its platform, body panels and powertrains. The latter one recently made its world premiere at the 2019 Tokyo Motor Show.

The headlamp design of the Toyota looks exactly similar to the Daihatsu Rocky. The headlights with LED elements could be reserved for the higher trims. The SUV also features fog lamps with angular housings, LED DRLs and a high-mounted Toyota badge. The large trapezoidal grille with mesh inserts seems inspired by the min-RAV4 SUV.

The 17-inch alloy wheels are carried over from the Daihatsu Rocky, but feature a different design. The horizontal wraparound LED taillamps connected by a thick chrome linning are similar to the Daihatsu Rocky. Other key elements include a floating D-pillar and front bumper with contrast black inserts. Read – Toyota Vellfire MPV Is Ready For India Launch

The Toyota Raize has been designed on the brand’s DNGA platform designed especially for the emerging market. Dimensions of the Toyota’s new subcompact SUV are yet to be revealed, though it could be similar to the Daihatsu Rocky. The latter one is 3995mm long, 1620mm wide and 1695mm tall with a wheelbase of 2525mm.

Interior offers features such as a freestanding infotainment system, dashboard with faux brushed aluminium bits on the AC vents and steering wheel. Powering the Toyota Raize is a 1.0L, 3-cylinder turbocharged petrol engine pushing out power worth 98bhp with 140.2Nm of torque. Read – Toyota, Suzuki, Daihatsu To Co-Develop Compact EVs

The new Toyota subcompact SUV can be had either with a 6-speed manual transmission or a CVT gearbox. While the FWD (front-wheel-drive) will be standard across the lineup, the 4WD (four-wheel-drive) system will be reserved for the top-spec models.