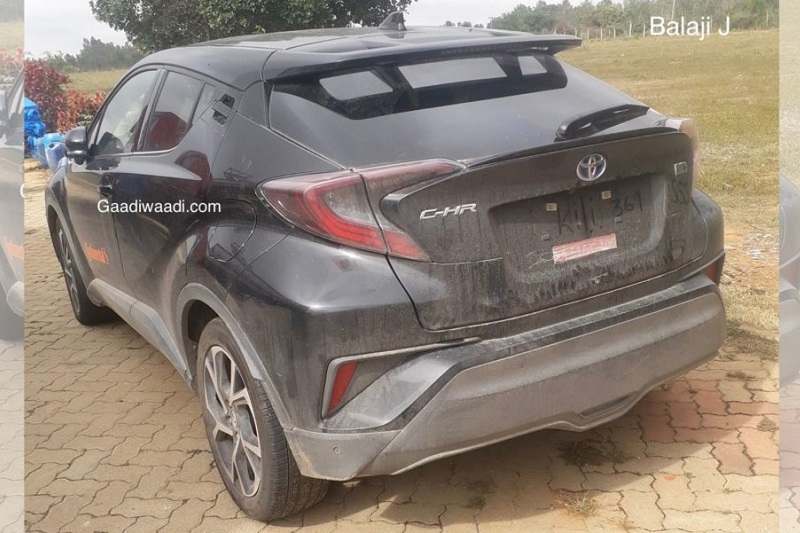 It is no secret that Toyota is readying a range of new models for the Indian market. The company has joined hands with Suzuki to develop new cars, platforms, EVs and technologies. Adding to it, Toyota is also aiming at utilising Government’s offer of importing 2,500 units without local homologation. It was reported that the Japanese brand is planning to import some of its global SUVs for the homegrown automaker.

One such product is the Toyota CH-R crossover, which has been spotted once again in India. This model is imported into India for testing purposes and is expected to be launched in our market in late 2020 or early 2021. It is based on the TNGA (Toyota New Global Architecture) platform, which also underpins the new Corolla. After introducing the CH-R, Toyota could introduce the all-new Corolla in India. Also See – Toyota C-HR – 5 things to know

The model spotted in India was equipped with Toyota’s new Hybrid Synergy Drive. It is powered by a 1.8-litre petrol engine producing 98PS, which is coupled to a 27PS electric motor. In the Japanese market, the Toyota C-HR crossover delivers an excellent fuel economy of 30.2kmpl. In terms of proportions, the C-HR crossover is 4,350mm in length, 1,795mm in width and 1,565mm in height. This crossover comes with a wheelbase of 2,640mm and has a boot space of 377-litres.

The Toyota C-HR looks more like a coupe-crossover, which has aggressive lines, stylish front profile and rear fenders and sporty rear facet. At the front, the crossover gets slim floating ‘wing’ shaped grille and sharp headlamps infused with high-tech 3D daytime running lights. Lower grille is big in size, flanked by round shaped fog lamps and floating front spoiler. The floating roof gives it a crossover-coupe styling. At the back, it gets a tapering glasshouse and an aero-inspired floating light clusters.

We reported earlier that Toyota is aiming to leverage on the new law of importing vehicles a year without the need of homologation. The company plans to bring in big hybrid and plug-in hybrid SUVs from Toyota’s global portfolio. Previous reports claim that the company is considering the RAV4, Highlander and the C-HR for the Indian market.