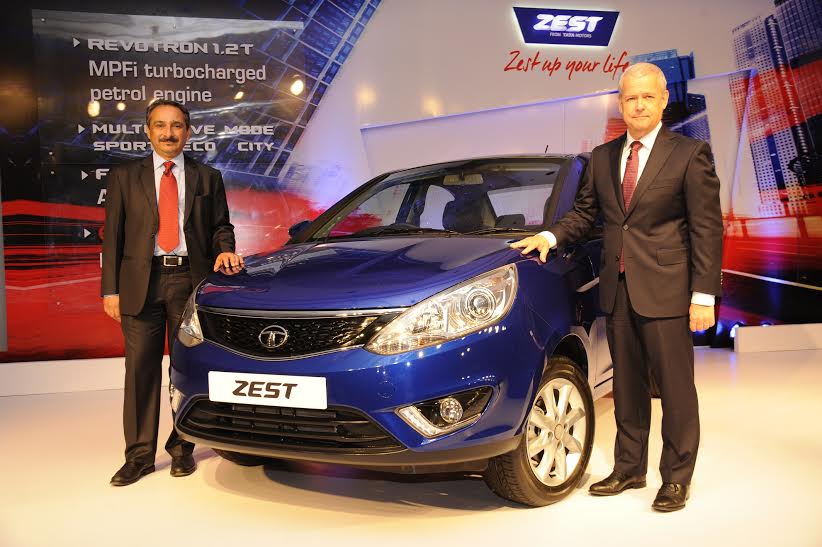 Tata Motors folks are certainly rejoicing now as the company’s latest offering – Zest sedan has raked in over 10000 advance bookings within 20 days of its launch. Mr. Ranjit Yadav, President, Passenger Vehicle Division, Tata Motors confirmed the same via his Twitter handle. Mr. Yadav was ecstatic as he tweeted that the Zest is doing phenomenally.

Ranjit Yadav also revealed that petrol variants are having a waiting period of 4-6 weeks while for the AMT variant in diesel guise, the waiting period is 3 months. The Zest is being placed in the toughest and most congested C segment of cars in India, where margin for error is negligible. It is pitted against the likes of Maruti Swift Dzire, Honda Amaze and Hyundai Xcent. Tata Motors, in what seems to be an attempt to cover the lost ground and re-brand its position in the market, launched the Zest sedan and it will be followed closely by the Bolt hatchback.

Tata Zest, as mentioned earlier, is being launched in both petrol and diesel guises. The petrol variants in-house a 1.2-litre turbocharged Revotron engine which dishes out a top power of 90 PS and peak torque of 140Nm. It is mated to company’s conventional 5-speed manual unit. Being cited as ‘India’s cheapest automatic diesel sedan’, the diesel variants of the compact sedan gets powered by a 1.3-litre Quadrajet diesel engine which is tuned to yield two different power outputs and torque performances – 75PS power & 190NM torque and 90PS power and 200Nm torque. It is paired with a 5-speed manual transmission. Additionally, an AMT transmission is also on offer with the top-end variant. Tata Zest was launched in a price domain of Rs. 4.64 – 6.99 Lakhs (Ex. Showroom, Delhi).