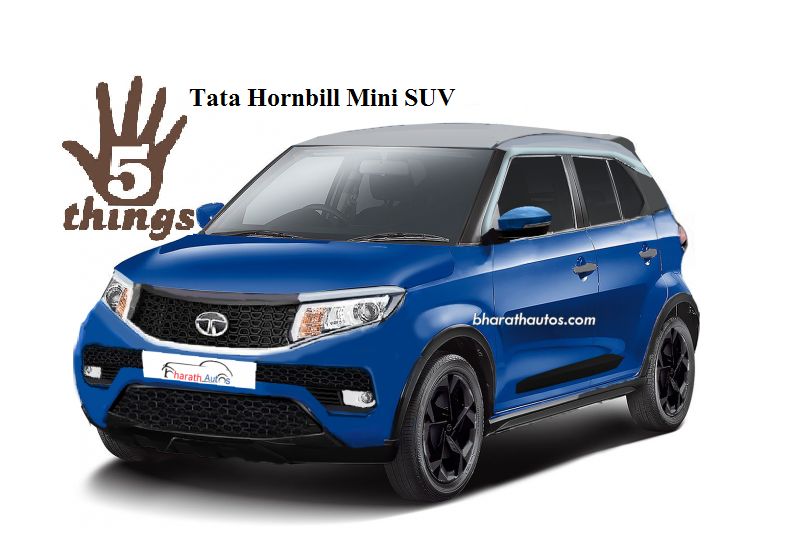 Tata Hornbill, the upcoming mini SUV from the home-grown carmaker, will make its global debut in the concept form at the Geneva International Motor Show. The event is slated to begin in the second week March, 2019. The production version of Tata’s new mini SUV is likely to hit Indian roads sometime next year. Before that, the SUV might make its public appearance at the 2020 Delhi Auto Expo. Here, we will discuss 5 important features of the Tata Hornbill mini SUV.

The home-grown carmaker confirmed that it will roll out 12 new products developed on its new Omega and Alpha platforms. While the former recently made debut on the Harrier, the latter one will be first used in the 45X concept based hatchback. The Tata Hornbill mini SUV will be the brand’s second model to be based on the Alpha architecture.

It would be quite early to comment on engine details of the Tata Hornbill. Though, rumors suggest that it might share powertrains with the Tiago hatchback – i.e. a 1.2L Revotron petrol and 1.05L Revotorq diesel. Tata is likely to tune both motors to make them compatible to the upcoming BS6 emission norms. More details will be revealed in near future. Read – Tata Harrier 7-Seater SUV Launch & Other Details

Similar to Tata’s new breed cars, the Tata Hornbill is likely to be loaded with several advanced comfort and safety features. It might get a floating touchscreen infotainment system with smartphone connectivity, automatic climate control, ABS with EBD and airbags. The micro SUV might also borrow most of its bits from the Tiago hatchback. Read: Tata Harrier SUV – Each & Every Detail

In India, the Tata Hornbill mini SUV will be positioned against the Mahindra KUV100 and the production-ready version of the Maruti Future S concept. It’s likely to involve locally sourced components and high level of local production that will help the carmaker curb its manufacturing cost and achieve competitive pricing. It’s estimated to be priced between Rs 5 lakh – Rs 7 lakh (ex-showroom).