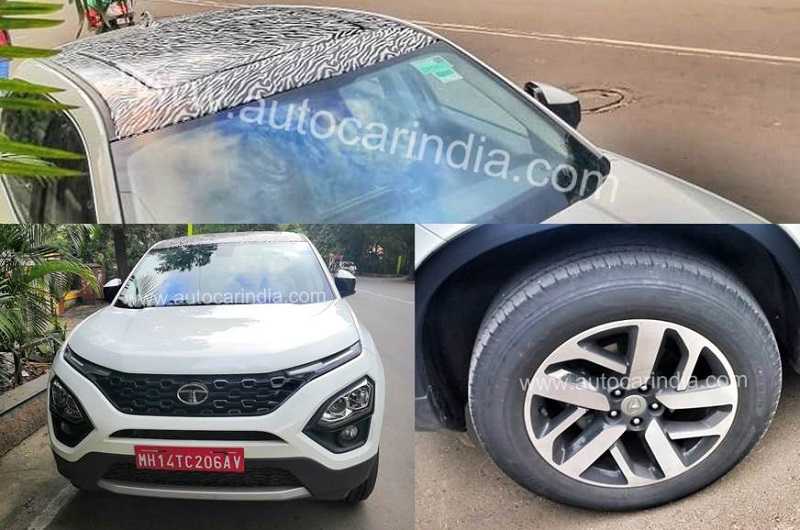 Seeing the rising competition, Tata Motors has recently introduced a dual-tone edition, a Dark edition with all-black scheme and several updates to the Harrier SUV. The company is also offering a sunroof with Harrier as an official accessory. Adding to it, an optional 5-year/unlimited kilometers warranty on the Harrier has also been introduced. The SUV’s upcoming new top-spec variant with new features has been spotted.

The new range-topping variant is likely to be called the Tata Harrier XZ+. It will come equipped with a larger, factory-fit panoramic sunroof. In the present, buyers have to shed Rs 95,100 (excluding labour charges) to get Harrier fitted with sunroof. The spotted model confirms that the new variant will be equipped with a panoramic sunroof, which will be bigger than the one available as optional.

Another change is the addition of new alloy wheels. The current model comes fitted with 17-inch alloys, which looks smaller for the muscular wheel arches. The spotted model was fitted with 18-inch dual-tone alloys, which looks similar to those seen on the Buzzard Sport. The alloy wheels are shod with low-profile 235/60-section Bridgestone Ecopia tyres.

The report further claims that the upcoming Harrier XZ+ variant could receive a tyre pressure monitoring system to justify the premium price tag. It is expected to be priced significantly higher than the current Harrier XZ variant, which is available at Rs 16.76 lakh (ex-showroom).

Tata Motors is also readying the BSVI compliant version of the 2.0-litre KRYOTEC diesel engine, which will be more powerful and produce around 170bhp. Adding to it, the engine will be mated to a new Hyundai-sourced 6-speed torque convertor automatic gearbox. Tata is also reportedly working on a new 1.6-litre turbocharged petrol engine, which will be introduced in the Harrier. The 7-seater version of the Harrier, previewed as Buzzard at 2019 Geneva Motor Show, will arrive in our market in early 2020, most probably around Auto Expo.