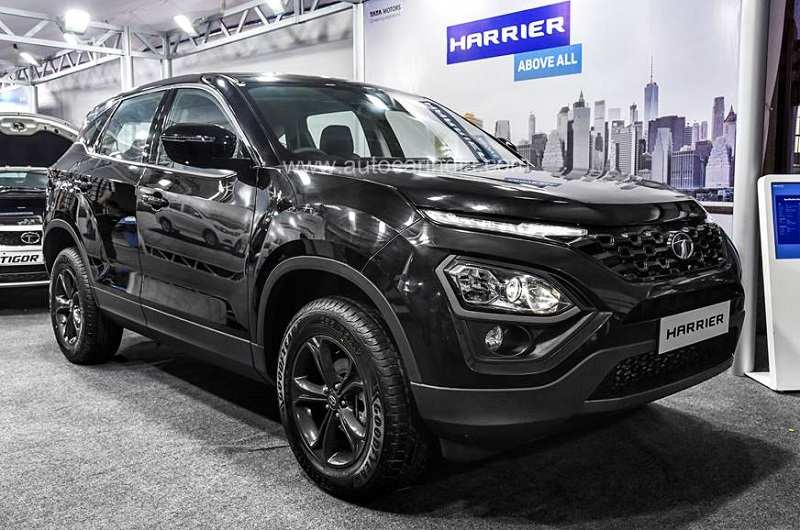 Tata Motors had launched the Harrier mid-sized SUV in January 2019. The SUV has been receiving positive response from buyers. However, it started feeling the heat from the likes of the aggressively priced MG Hector and the soon-to-be-launched Kia Seltos. In order to keep sales momentum, Tata Motors will launch an all-black version of the Harrier SUV in August 2019.

The Tata Harrier Black Edition was recently showcased at the company’s annual general meeting. The sporty looking Harrier Black version comes with a glossy-black exterior paint scheme and blacked-out 17-inch alloy wheels. Skid plate at the front and matte-silver element on the rear bumper has been finished in black paint. However, it continues with the chrome finish on the window line.

The blackened theme can be seen on the inside as well, as it comes with all-black interior scheme. Instead of the brown upholstery, the Harrier Black Edition gets black leather upholstery. Adding to it, the textured matte-grey panel has replaced on the faux-wood insert on the dashboard. Also See – Tata Harrier to receive 4 major changes in near future

Except for these changes, the Tata Harrier Black Edition remains identical to the standard SUV. It is likely to co-exist with the current line-up. The black colour will join the existing colour range of the SUV – Calisto Copper, Ariel Silver, Thermisto Gold, Telesto Grey, Orcus White and the dual-tone shade.

Tata Motors will soon upgrade the Harrier with significant updates. The updated model will be equipped with a BSVI compliant 2.0-litre KRYOTEC diesel engine, which will be more powerful and fuel efficient than the outgoing model. It is expected to produce around 170bhp and 350Nm of torque.

Adding to it, the SUV will also be fitted with an electric sunroof and a 6-speed automatic gearbox. The company will also launch a 7-seater version of the Harrier, which was showcased at the 2019 Geneva Motor Show as the Tata Buzzard.