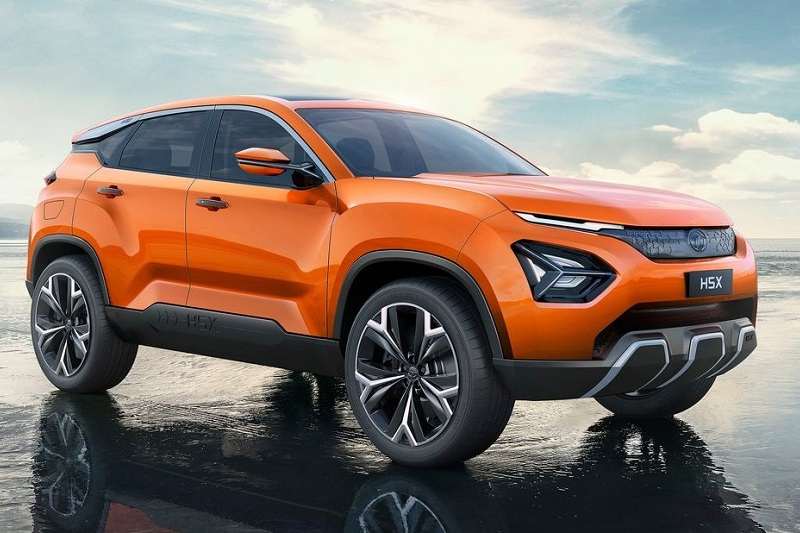 Sales graph of Tata Motors has been rising at a scorching pace from the last few years, and it seems to be shooting up in coming years. Backed with the new-generation IMPACT Design 2.0 philosophy and futuristic approach, the company aims to become the second largest carmaker by 2020. Tata has already proved its mettle in the passenger vehicle segment with its new breed of cars including Tiago, Nexon, Tigor and Hexa. Besides that, the carmaker has several exciting products in the pipeline such as Tata H5X SUV, 45X premium hatchback and E-Vision based premium sedan.

Previewed at the Auto Expo 2018, the Tata H5X concept represents design, technology and capabilities of the brand’s future generation SUV. Scheduled to launch early next year, the H5X is Tata’s first SUV to adorn new-generation IMPACT Design 2.0 philosophy. It’s also the brand’s first car to be based on the new-generation ‘Optimal Modular Efficient Global Advanced’ architecture, which has been developed jointly with Jaguar Land Rover. Derived from the Land Rover D8 platform, this chassis is claimed to be designed especially for Indian terrains. It indicates that the SUV will posses some serious off-road capabilities. Read – Tata H7X SUV To Challenge Toyota Fortuner 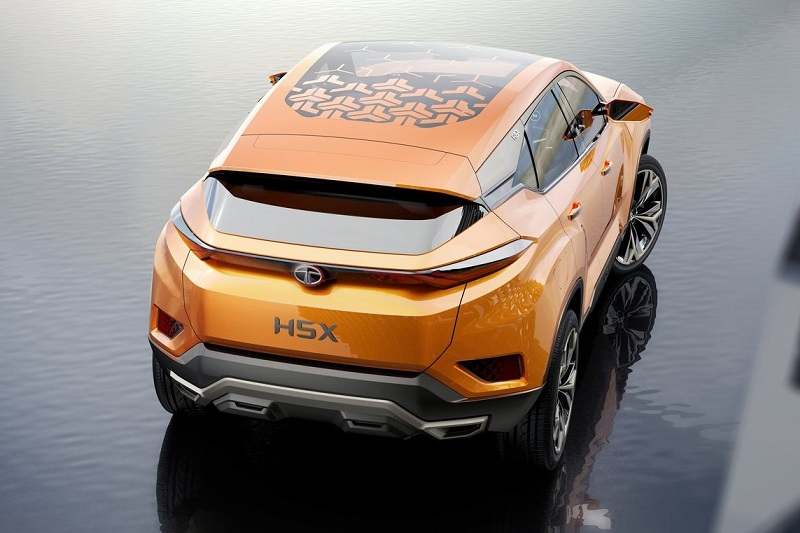 Pratap Bose, Head of Design, Tata Motors, has confirmed that production version of the Tata H5X will retain 80-85% design bits from its concept. Marking a shift to bolder designs, Tata’s new-gen IMPACT design language has more prominent details such as a ‘tri-arrow’ pattern for fog lamps, strong fenders, segment-leading wheel sizes and a more pronounced three-dimensional ‘Humanity Line’. Interior design of the SUV is claimed have practical layout with ‘clutter-free’ ambiance. The H5X’s new HMI (Human Machine Interface) screens with a ‘clear and intuitive’ user interface are claimed to be best-in-segment. The Tata SUV might share its engine (2.0-litre MJD turbo diesel) with one of its arch rivals – the Jeep Compass. Check Out – Tata Cars at Auto Expo 2018 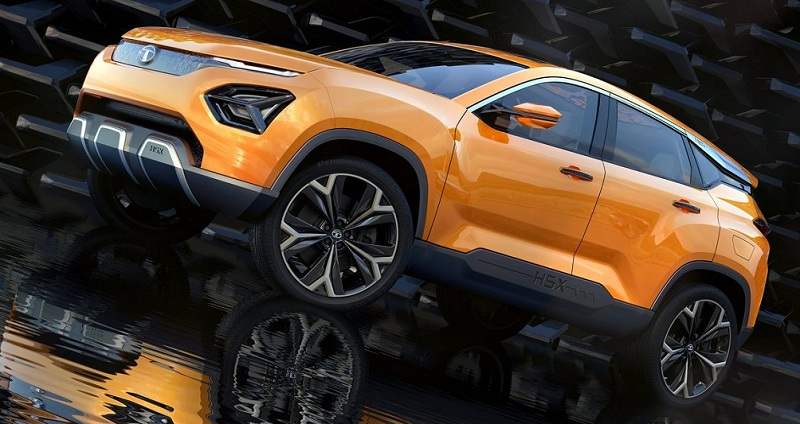 At the 2018 Auto Expo, the home-grown carmaker confirmed that the all-new Tata H5X SUV will hit showrooms in early 2019. The company also revealed that it will soon enter production. According to a latest media report, the production-ready H5X will make its first appearance in November, 2018. The 5-seater SUV had its world premiere in the concept avatar at the Delhi Auto Expo in February, 2018. Alongside, the company also showcased the 45X premium hatchback concept, Tigor & Tiago JTP models, Tigor & Tiago EVs and Racemo sportscar. Read – New Tata Sedan To Challenge Honda City

The last few years have been quite fruitful for the home-grown carmaker in the Indian market, thanks to its new business strategy and a range of capable products. Competitive pricing has also been a key factor behind the success story of the company.  Following the same approach, the carmaker will continue to strengthen its position in different segments be it hatchback, compact SUV or SUV. Therefore, we can expect that the H5X will be priced competitively against its arch rivals. Powertrain of the 5-seater is likely to be borrowed from the Jeep Compass – i.e. 2.0-litre Multijet diesel.

Developed with high-level of localization at Fiat’s Rajangaon plant, this engine will surely help the carmaker to achieve aggressive pricing. Aiming to further curb its production cost, Tata might replace some expensive aluminium components with steel units. The new Tata H5X price in India might start from Rs 12 lakh for the entry-level variant and go all the way up to Rs 20 lakh for the top-spec model. If launched at this price point, the new Tata SUV will face challenge from cars like Hyundai Tucson and Jeep Compass. 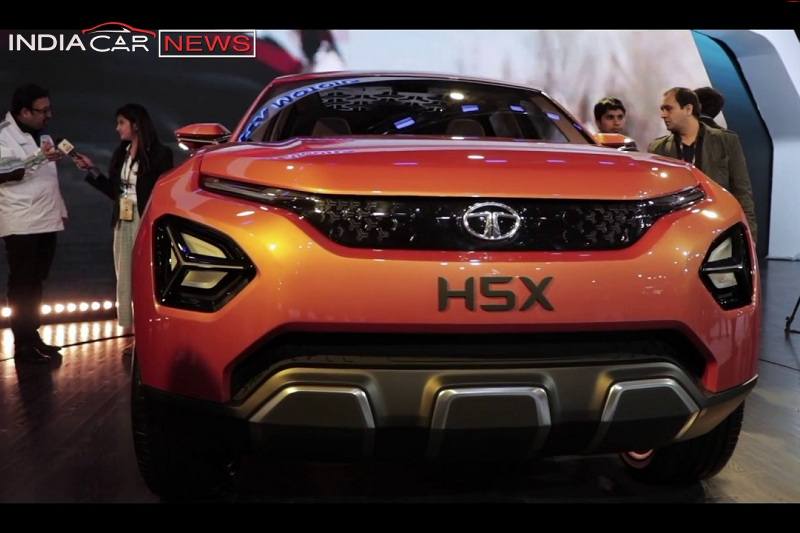 Engine specifications of the new Tata SUV are still under the wraps. However, the reports suggest that the H5X could be offered with the Fiat sourced 2.0-litre Multijet diesel powertrain that also does duty in the Jeep Compass. On the latter one, the oil burner generates a maximum power output of 170bhp at 3,750rpm and 350Nm of peak torque between 1,750rpm – 2,500rpm. For the H5X, however, this motor could be tuned for two power outputs – 148bhp with 350Nm and 170bhp with 350Nm. The H5X five-seater SUV will make use of the 148bhp unit, while the 170bhp state of tune will be offered on the bigger H7X 7-seater SUV.

Besides sharing the powertrain, the Tata H5X will borrow the ZF-sourced 9-speed automatic transmission from the Jeep Compass. Produced locally, this gearbox has been designed for the four-wheel-drive vehicles and is longer than the standard 6-speed transmission unit. Features such AWD (all-wheel-drive) system with Land Rover’s Terrain Response Program and all-independent suspension system could also be carried over from the Land Rover Discovery Sport. Tata might also offer multi drive mode on the SUV carline. Check Out – Upcoming Tata Cars in India

Rumor has it that Tata’s new compact SUV could be offered with the 2.0L Multijet diesel engine. This motor has already been used in the Jeep Compass. This oil burner is frugal in nature and promises a punchy mid-range performance. On the Jeep Compass, the 2.0L motor delivers a claimed fuel economy of 17.1kmpl. With slightly heavier body built than the Compass, the Tata H5X is estimated to deliver a mileage around 15kmpl – 17kmpl. Check Out – Tata Nexon Aero Price & Pictures 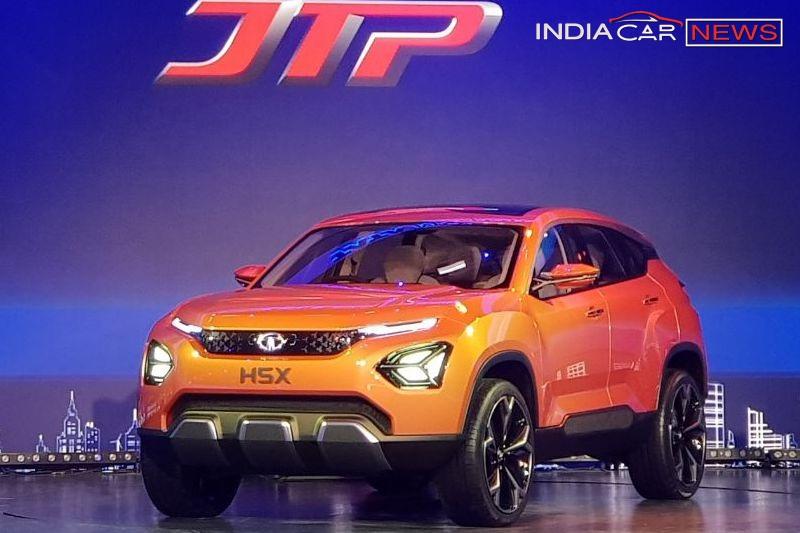 Tata’s new 5-seater premium SUV will be designed on the new-generation Optimal Modular Efficient Global Advanced (OMEGA) platform, which is developed in collaboration with Jaguar Land Rover. This architecture is essentially soured from Land Rover Discovery Sport’s L550 platform. Designed for the rough terrains, this robust L550 architecture will enhance the overall handling, driving dynamics and off-road capabilities of the car.

Interestingly, the H5X is one of the first Tata cars to be based on the new-generation IMPACT Design 2.0 design language. The shift to the more evolved IMPACT design language will make the SUV look aggressive and bold. Styling elements such as high-mounted LED headlamps and a more prominent three-dimensional ‘Humanity Line’ that underlines the headlamps and the front grille give an aggressive appeal to its front profile. The fog lamps have the signature ‘tri-arrow’ pattern. Other key features include larger side air vents, three-element skid plates with inserts, front skid plate and chunky clamshell-like hood. Read About – Tata Tiago JTP | Tata Tigor JTP

Unlike the concept version that was equipped with the 22-inch wheels, the production-ready Tata H5X will come with the smaller 19-inch MRF Wanderer tyres. Features such as pronounced wheel arches, blacked C-pillar, bold side creases, sporty roofline, trapezoidal fenders, chunky cladding at the base of doors and the large and rounded ORVMs further enhance its side looks. Round the back, the car features sporty bumper with intricate details on the lower portion and wraparound smoked tail lamps.

With respect to proportions, the Tata H5X will be bigger than the Jeep Compass. The overall length, width and height of the SUV’s concept version measure 4,575mm, 1,950mm and 1,686mm respectively. It has a 2,740mm long wheelbase ensuring spacious cabin for occupants. However, the dimensions of the SUV’s production-spec model could be altered by the carmaker. The SUV will posses off-road capabilities indicating towards higher ground clearance. 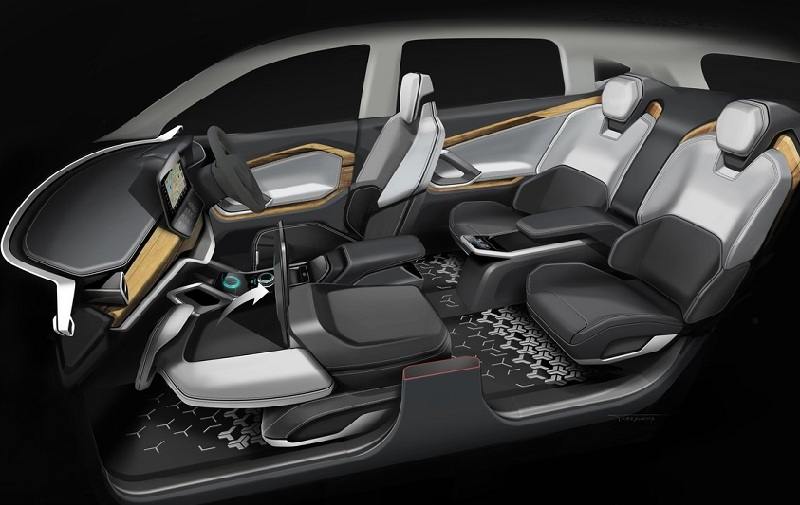 For the record, Tata Motors claims that the new-generation IMPACT Design 2.0 philosophy emphasizes on the ambiance and practicality of the interior. Featuring the new design language, the SUV will have the segment-leading HMI (Human Machine Interface) displays with ‘clear and intuitive’ user interface. While interior design and feature details are yet to be revealed by the carmaker, the latest spy pictures give a rough idea about its appearance. The SUV will come with the two-layer dashboard and centre console design along with an integrated touchscreen for the infotainment system.

The front seats have a dedicated overhead storage binnacle and memory function. The wide rear seats can accommodate three adult passengers. There is a centre armrest for the front and rear seats occupants. The Tata H5X SUV will be offered with the 5-seats and is likely to offer a generous cabin space. Feature-wise, the new Tata SUV will be loaded with several advanced comfort and safety fitments. Read About – Tata Tiago Electric | Tata Tigor Electric

The list of feature will include Harman-sourced ConnectNext infotainment system, Tata’s rotary knob based drive selector programme, a large touchscreen integrated on the centre console, automatic climate control and three-spoke steering wheel and rear AC vents. Similar to Tata’s new-age cars, the H5X SUV will have robust body-built and offer a pack of advanced safety features. It will be equipped with airbags, by anti-lock braking system (ABS) with electronic brake-force distribution (EBD), traction control, hill hold control and electronic stability program with roll over mitigation.

The Tata H5X 5-seater premium SUV concept made its global debut at the Auto Expo in February, 2018. Carrying Tata's new-generation IMPACT Design 2.0 philosophy, the concept previews the brand's futuristic design approach and technology. It's the company's first car to be built on the new-generation ‘Optimal Modular Efficient Global Advanced’ platform.