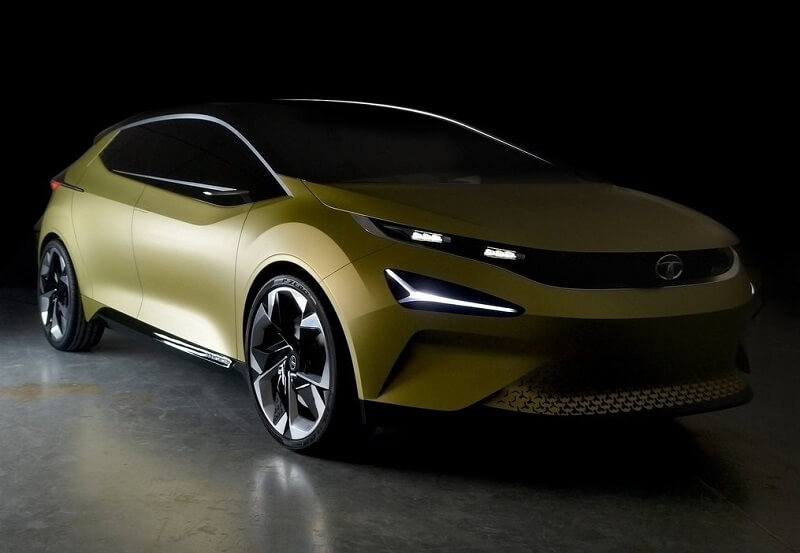 Tata Aquilla will be the brand’s first model to use the new AMP platform.

This year, Tata Motors will bring in its two important products in India – the Harrier SUV and the 45X concept based premium hatchback. While the former is ready to hit showrooms on 23rd January, the latter one is reported to see a release in the second half of 2019. Official name of the Tata 45X based hatchback is yet to be announced by the carmaker.  Reports suggest that it could be named ‘Tata Aquilla. Interestingly, the new Tata premium hatchback will be the company’s first product to underpin the AMP platform (Advanced Modular Platform). The same architecture will also be used for Tata’s future cars.

The home-grown carmaker says that “Tata 45X is an amalgamation of futuristic design, advanced technology, intuitive connectivity and great performance”. Carrying the new-generation IMPACT Design 2.0 philosophy, the Tata Aquilla has been designed jointly by the carmaker’s three design studio (Pune, UK and Italy) with inputs from Jaguar Land Rover. Similar to the Harrier, the production version of the 45X will stay close to the concept. Engine setup of the Tata Aquilla hatchback is likely to be carried over from the Nexon compact SUV. Rumour also has it that it might get a 48V mild hybrid engine with idle start-stop function. Read: Tata 45X hatchback – Expected Changes From Concept 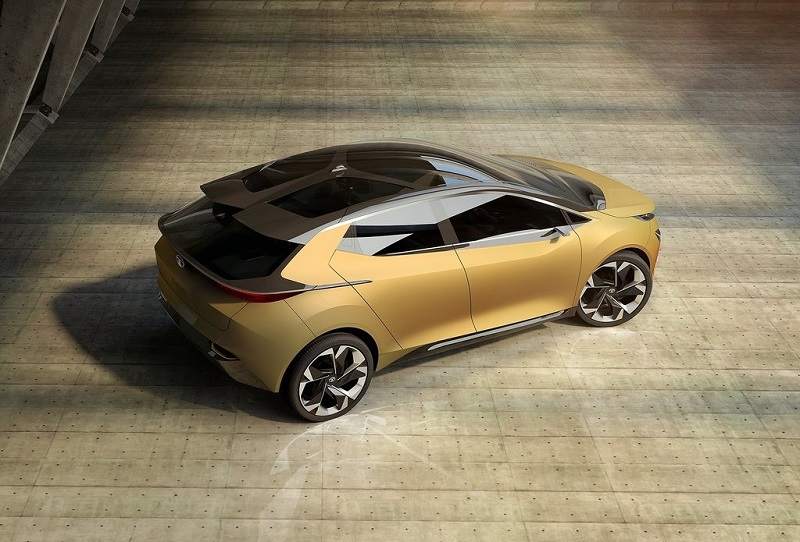 The home-grown carmaker has already confirmed that it will launch the 45X concept based premium hatchback by mid 2019. However, the official launch date is yet to be announced. The Tata Aquilla, which is currently in its testing phase, is reported to go on sale in August, 2019. Stay tuned to IndiaCarNews for its official launch date and details. Read– Tata H7X SUV Under Development; To Challenge Fortuner

As mentioned above, the Tata 45X based hatchback will use the brand’s new advanced modular platform that’s compatible to different lengths, widths, wheelbases and suspensions. Tata will use the AMP architecture for its new below 4-meter length vehicles. In order to keep manufacturing cost low and achieve competitive pricing, the company aims to attain high level of localization. The Tata Aquilla price in India is likely to begin from Rs 6 lakh for the base model and go up to Rs 10 lakh for the top-spec trim. If launched in this price range, the new Tata hatchback will take on the Maruti Suzuki Baleno and Hyundai Elite i20. Read – New Tata Sedan To Challenge Honda City

The production-ready version of the Tata 45X concept will be made available with both petrol and diesel engine options. Powertrains are likely to be borrowed from the Tata Nexon compact SUV. That means, the petrol model might come with a 1.2L turbocharged motor generation a top power of 108bhp and a peak torque of 170Nm. The diesel variants will source power from a 1.05L, 3-cylinder VGT unit churning out a maximum power of 108bhp and 260Nm of torque. Read – New Tata Sierra Might Make A Comeback In A Modern Avatar

Both the motors will be calibrated to meet the upcoming BSVI emission norms. A few media reports claim that the Tata Aquilla might receive a 48-volt mild-hybrid powertrain with idle start-stop function. Just so you know, Tata’s UK-based R&D centre had showcased 2 different mild-hybrid system codenamed – P0 and P2. Transmission options will include a 6-speed manual and automatic gearbox options. The hatchback is likely to come with the front-wheel-drive (FWD) system.

With new and lightweight platform, the Tata Aquilla 45X hatchback is likely to be high on fuel economy. If it shares its powertrains with the Nexon, its mileage figures will be equivalent to its donor sibling. We expect the petrol version of the hatch will deliver mileage around 18-20kmpl, and its diesel model could return close to 25kmpl. 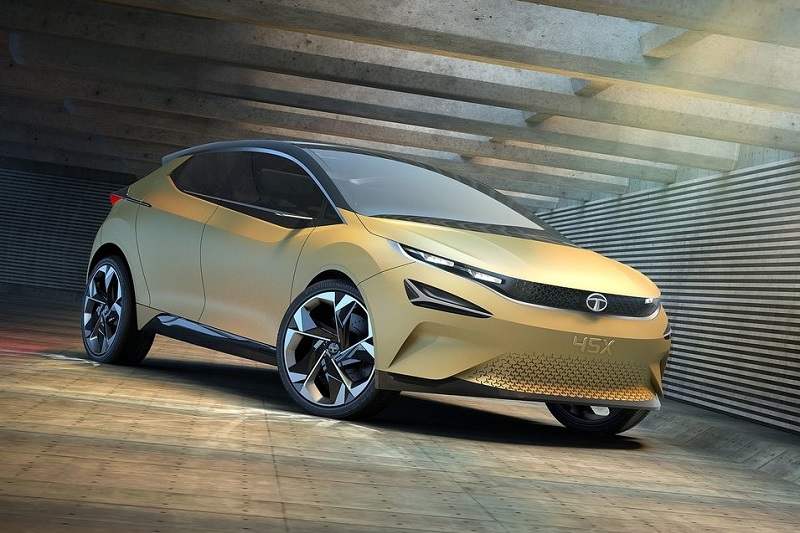 The new Tata hatchback has been built on the new Alpha or AMP (Advanced Modular Platform) that will also be used to develop a mini SUV and the next-generation Nexon and Tiago. The AMP architecture will also meet the future crash test regulations, and support both left and right hand drive layouts. The Aquilla will be the brand’s second product to feature the new IMPACT 2.0 Design philosophy. The production version of the premium hatchback will retain most of its styling bits from the 45X concept that broke cover at the 2018 Delhi Auto Expo. Though, the carmaker will make some practical changes to the final model. Read – Tata Hornbill Micro SUV In The Works

Features such as prominent 3D ‘Humanity Line’ underlining a digitally-inspired grille and dual ultra slim LED headlamps will be carried over the concept. It will also get projectors headlamps with integrated LED DRLS and fog lamp assembly with a new ‘tri-arrow’ pattern. What add more to its bold and futuristic looks will be strong fenders, flared wheel arches with class-leading wheel sizes and a sloping roof. The rear door handles will be integrated to C-pillar, which we have already seen on the new Maruti Swift. At the back, the hatchback will sport full LED tail-lights, an integrated spoiler and surfboard mounted wing cameras.

The overall length, width and height of the Tata 45X concept stand at 4253mm, 1850mm and 1451mm respectively. It has a wheelbase of 2630mm. Unlike the concept that features 235/35 Z R20 front and rear size tyres, the production version might get a different size pair. 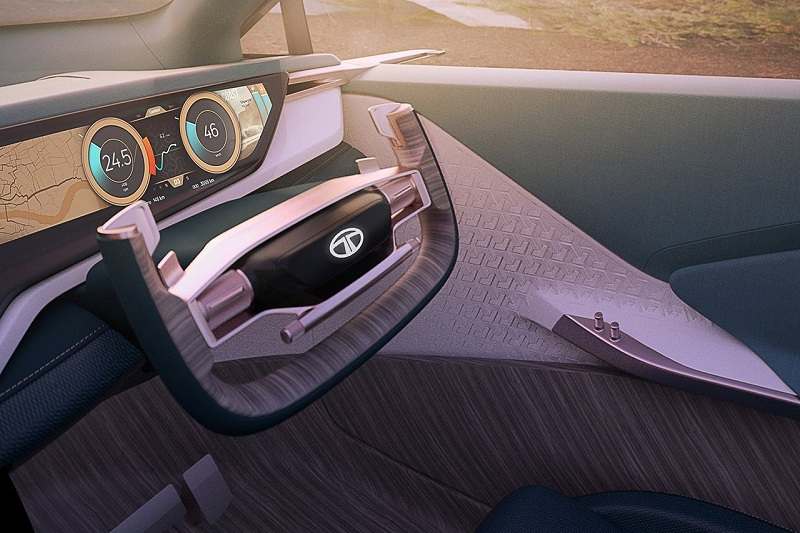 Tata hasn’t revealed the interior details of the hatchback; however, the spy images confirm that the premium hatchback will have class-leading features. It might also offer the best-in-class material quality and fit and finish. The latest spy pictures reveal that the Tata Aquilla will get a large free-standing touchscreen infotainment system positioned above the centre console supporting Android Auto and Apple CarPlay. It is claimed to offer ‘segment leading’ human-machine interface screens. Read – New-Gen Tata Sumo With Modern Tech Is A Possibility

For entertainment purpose, the Tata 45X concept based hatchback will offer Harman-sourced sound system with JBL speakers. The dashboard will have conventional design with integrated analogue dials and T-shaped centre console with air con vents beneath the centre screen. It will also get multi-functional flat-bottom steering wheel along with features such as Indian lattice-work inspired rear AC vents, instrument cluster and automatic climate control. The all-black interior theme with piano black and silver accents will give it sporty feel and appeal.

As mentioned above, Tata’s new premium hatchback will mark debut of the company’s new AMP platform that meets the future crash regulations. With robust body built and a pack of advanced safety features, the vehicle will ensure safe drive. While the official feature details are still under the wraps, it is likely to receive airbags, ABS (anti-lock braking system) with EBD (electronic brake-force distribution) and brake assist as standard fitments.