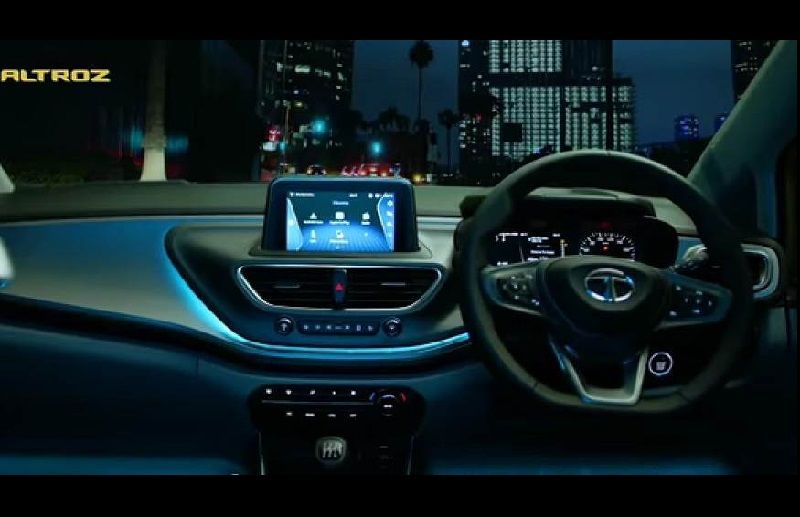 Tata Motors will soon launch the much-awaited Altroz premium hatchback in the Indian market. The company has also started teasing the new model through its social media handles. Ahead of the official announcement, a promotional clip inviting bookings for the Tata Altroz has been leaked on the Internet. The 15 second clip suggests that the dealer level bookings to commence very soon. Adding to it, the teaser also reveals interesting details about the highly anticipated hatchback.

The teaser reveals that the design of the dashboard is same as that of the model unveiled at the 2019 Geneva Motor Show. It comes with ambient lighting, while the diffused green lighting can be seen around the centre console. The centre touchscreen also has an ‘Ambient Lighting’ icon. Adding to it, the video hints that the hatchback also has the app-based and Google-powered voice-activated functions. Also See – Tata Altroz Vs Maruti Baleno

The steering wheel has buttons for the cruise control and the audio system. There is an instrument console with analogue speedometer and digital tachometer. The design of the hatchback remains largely identical to the show car at the Geneva Show. The top-shot reveals that the car’s front door can open to a near 90 degree angle, which should improve the ingress and egress. Also See – Tata Altroz – 8 Interesting facts to know

The technical specifications of the car are yet to be revealed by the automaker. Media reports claim that the hatchback will be offered in 3 engine options – a 1.2-litre naturally aspirated petrol, a 1.2-litre turbocharged petrol and a 1.5-litre turbocharged diesel. The company will initially launch the manual gearbox with these engines, while the automatics will arrive on a later date. The Tata Altroz will be positioned against the likes of the Maruti Baleno, Hyundai Elite i20 and the Honda Jazz. It is likely to be priced around Rs 5 lakh – Rs 9 lakh.