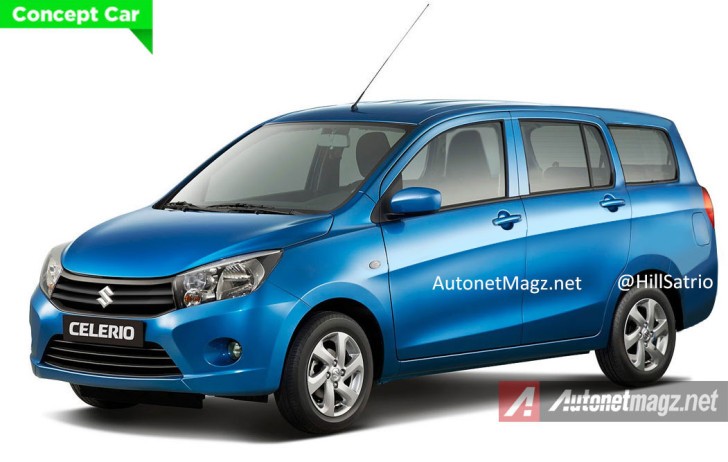 Nissan revived its low cost brand Datsun to improve its market share in the growing nations including India, Indonesia, Russia and South Africa. The company introduced its sub-4 metre MPV, Datsun Go+ in Indonesia, which recorded 3500 bookings within 2 months of launch. If media reports are to be believed, Suzuki is also planning to introduce the low-cost MPV that will compete against the Go Plus MPV.

The new low-cost MPV will be developed for the Indonesian market which will also go on sale in other Asian nations. The new model will sit below the Ertiga MPV. Earlier, Suzuki showcased a Wagon R based MPV; however, the company stated that the new model will be based on a new platform. A team of engineers have been developing the new low cost MPV in Japan. According to autonetmagz, the new low cost MPV will be based on the current Celerio platform to keep its cost down.

This render presents that the Celerio based MPV with similar design and wheelbase which still have the space for third row at the rear with some changes. The Celerio is powered by the small 1.0-litre K-Series petrol engine that is also likely to power the MPV and it also qualify under the LCGC norms. The new low cost MPV is likely to be unveiled by the year end or by early next year. Datsun India will also launch the Go+ MPV in India and is likely to be priced under Rs. 5 lakh. This could also open a sub-4 metre 7-seater MPV segment in the country.