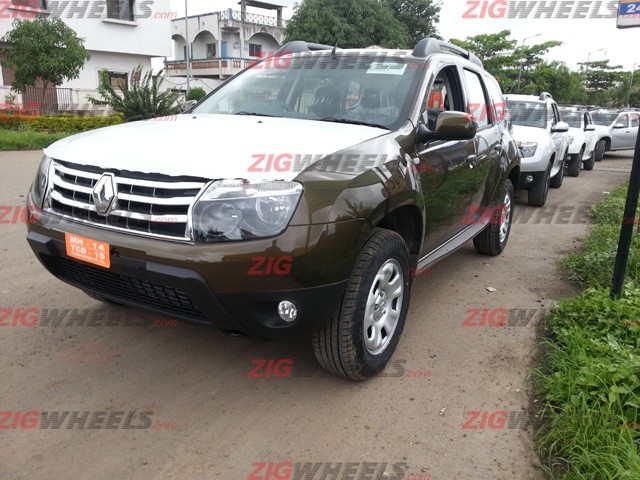 On the exterior front, the most noteworthy inclusion is in the form of tinted headlights lenses. There would be at least 2 variants with AWD on offer, and the base model is expected to feature conventional steel wheels while the top-end model would flaunt stylish alloy wheels. The boot lid would adorn a ‘4WD’ badge in order to distinguish it from the normal rear wheel drive variants. As far as interiors are concerned, the ‘4WD’ variants would feature all-new steering wheel that would be up-market than the one in the regular variants. The seats would be done in red and the infotainment system would comprise of a touchscreen unit in the top-end variant. The 4WD controls would be positioned beneath the A/C knobs. The 4WD system would be consisting of three modes – 2WD, Auto and Lock to lock the differential. The four wheel drive Renault Duster would also come loaded with traction control system as it is clearly visible in the spy-shot. The Duster 4WD will also be displayed to the customers in the coming week as the launch is taking place next month. Also, media drives are kick-starting from tomorrow for this highly anticipated 4WD variant. It is expected to be priced at Rs. 12 – 13 Lakhs, and would be the top-of-the-trim variant. It would be at loggerheads with the Mahindra Scorpio 4×4 and Tata Safari Storme 4×4 in the Indian auto industry.