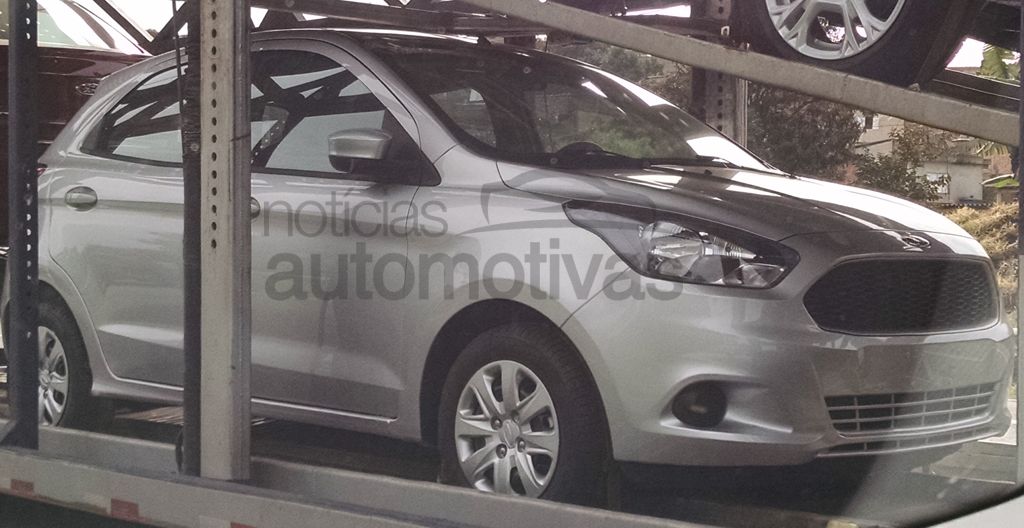 We reported earlier that Ford Brasil has revealed few pictures of the production version of Ka & Ka sedan through its social media pages. Now, the production spec models have been spotted while the vehicles were loaded on a trailer.  Interestingly, the different versions of trim levels of the hatchback and the sedan were spotted.

The noticias automotives members have clicked three units of the new generation Ka (New Figo) that were painted in silver colour. Out of the three models, two features alloy wheels and the other one wears hubcaps. Similarly, the NA reader managed to snap two new Ka+ which were painted in wine colour. Like the new Ka, the one of the sedan models features alloy wheels and other gets black steel wheels. Both the models look quite identical to the concepts unveiled; however, the company has made some tweaks to make them road compatible. The headlights appear simple and are integrated with a parabola with flash and flashlight. The Ka hatchback features the honeycomb grid format grille instead of chrome slats found in the concept. However, the photographer failed to click the front fascia of the sedan model. The Figo sedan is likely to feature the Aston-Martin like chrome grille flanked by sweptback headlamps. The hood, bumpers and the mirrors look identical to the concept model. The company has recently revealed the interior shot of the new generation Figo. It will be the first car in Brazil to come up with the SYNC AppLink with connectivity installed. The SYNC with AppLink system sports voice activated commands which allow the occupant to dial and call, and change music system.

The Brazilian spec models will be powered by a 3-pot, 1.0-litre engine that produces 85bhp of top power.  The new generation Ford Figo will come to India by the mid-2015, before that the company will launch the Figo sedan.