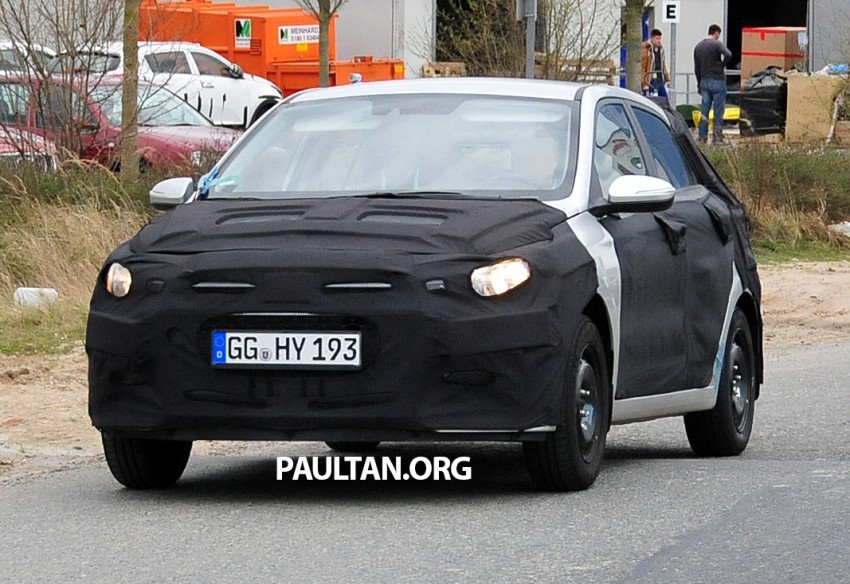 It has been a while since new generation Hyundai i20 premium hatchback has been spotted testing in India as well as abroad including Spain, North Europe and South Korea. This time the vehicle caught during its test mules in Europe and a set of interior photos have been snapped. The spotted vehicle is likely to be an entry level variant as it has been fitted with steel wheels. The new generation Hyundai i20 will be unveiled at the 2014 Paris Motor Show. (Read More- Upcoming Hyundai Cars in India)

The rear profiles of the car with limited camouflage reveal that the new generation i20 will have a sporty and a newly designed tail lamp assembly. Based on the popular Hyundai Fluidic design philosophy, the new i20 looks like an extended version of the Grand i10 hatchback. It is expected that the car will get new bumpers, front grille and a new set of headlamps.

Inside the cabin, the vehicle will get a newly designed dashboard with new central console and instrument panel. The new i20 will feature climate control, 2-DIN music system with connectivity options like Bluetooth, USB and AUX-in, new steering wheel with audio controls mounted on it. Though the spotted vehicle sports steel wheels, we expect it to get alloys for the mid and top spec models.

Under the bonnet, the new i20 will carry over the same engine lineup. While the petrol version will be powered by the 1.2-litre Kappa2 unit producing 83PS, the oil burner gets the 1.4-litre CRDi unit that develops 93PS. The European market might also get the 1.0-litre petrol and 1.1-litre 3-cylinder diesel engine.

The South Korean automaker is also working on a performance oriented version of the i20, which will be tagged under Hyundai’s new N performance brand. This performance brand is likely to be revealed in the international markets after the Paris Motor Show.

The new generation Hyundai i20 hatchback is likely to make its Indian debut by the festive season. It is expected to be priced little higher than the current generation model, or the company might retain the pricing for the model.