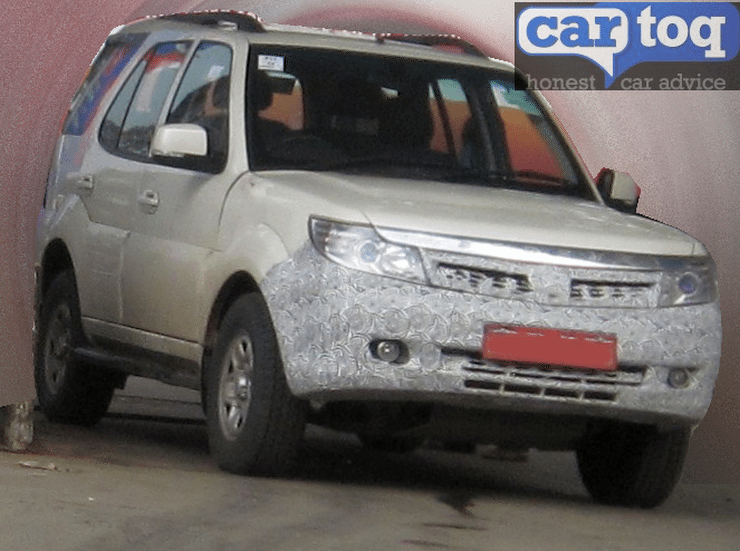 We reported earlier that Tata Motors is working on the Safari Storme SUV facelift. Now, the refreshed SUV has been spotted testing on Pune roads. If media reports are to be believed, the vehicle will go on sale in India by festive season. It gets changes to both exteriors and interiors, while the interior likely to go more premium.

The refreshed Safari Storme gets a restyled front fascia which is equipped with a new honeycomb front grille and a restyled bumper. Inside the cabin, the vehicle likely to share component levels with the Aria facelift. It will feature the Harman Kardon infotainment unit. Moreover, the company is expected to offer front facing third row seats to offer more spacious cabin.

The Safari Storme facelift will be offered in both rear wheel drive and four wheel drive options. Moreover, it will also get the tuned 2.2-litre turbo diesel engine. This engine also powers the Aria facelift and produces 148bhp of top power (an increase of 8bhp) and 320Nm of peak torque. The diesel motor will be paired to a five-speed manual transmission gearbox.

Tata Motors is reportedly working on a new six-speed automatic gearbox; however, it is quite early to comment that the updated Storme will feature this transmission or not. The SUV is priced at Rs. 9.93 lakh for base variant and Rs. 13.70 lakh for top-end model. The prices for the new model are expected to remain unchanged. It will compete against the likes of Mahindra Scorpio, Renault Duster, Nissan Terrano and Mahindra XUV500.