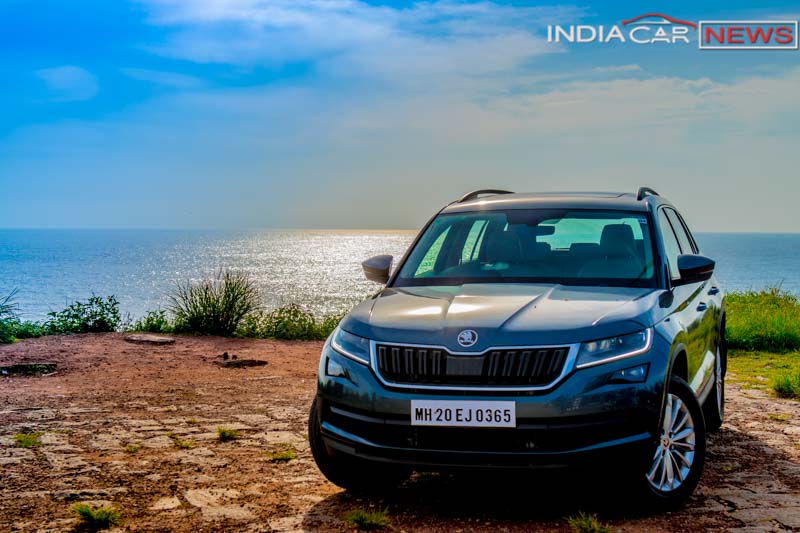 Skoda is not only pitching the Kodiaq as a Toyota Fortuner and Ford Endevour rival but also as a potent contender against the likes of BMW X1 and Audi Q3.

Skoda is leaving no stone unturned to change its fate in India. Back to back launches – increasing touch points – promising better after sales & low cost of ownership. That hunger to succeed can be easily seen now. The Kodiaq is another step in the direction.

SUVs have done wonders for carmakers in India. And Skoda is just expecting the same with the Kodiaq. This is their second SUV in the country after the Yeti but first with 7 seats. So, will this be THE product for Skoda in India & should the old school ladder-frame 7-seaters or the big badged luxury 5-seaters be worried? Let’s find out! Also Read – Skoda Kodiaq – All You Need To Know 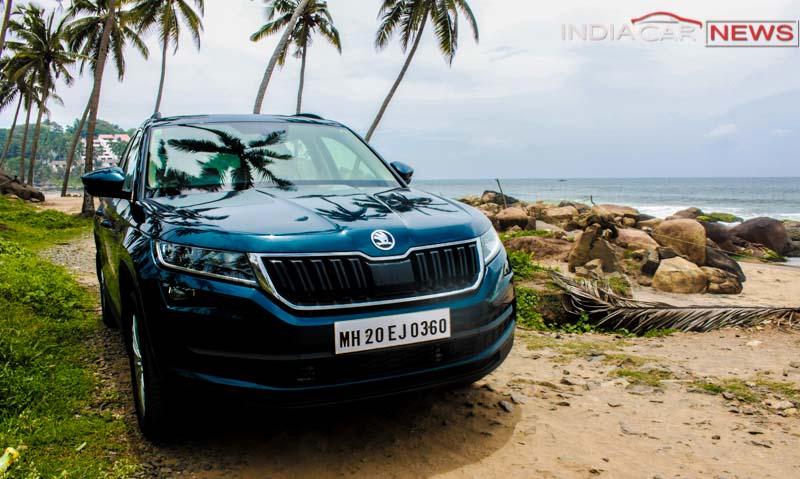 The Kodiaq is the most sophisticated SUV of the lot. While its prime competitors – the Toyota Fortuner and Ford Endeavour carry swanky and stout appeal, the Kodiaq feels suave and urbane. It looks more compact than it actually is, thanks to the sharp and edgy design. The details are so emphatic that it manages to do a great job of catching everyone’s attention easily.

In terms of design the Kodiaq is a typical Skoda, which isn’t a bad thing. Its front is dominated by the bolder and wider trademark butterfly grille, all-LED angular headlights and a sculpted bonnet. The fog lamps look really edgy and use projector beams for the illumination.

There are prominent creases on the sides and very subtle grey cladding around the base which compliments the look well. The square-ish wheel arches with 18-inch wheels tries hard to leave a muscular effect but the slopping roofline and lean stance more-or-less lends it an overgrown estate on stilts look. The rear is also very un-like SUV and the all-LED tail light units are reminiscent of the Superb’s. 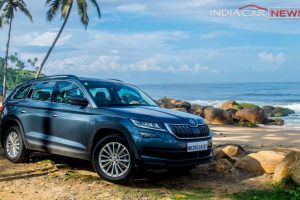 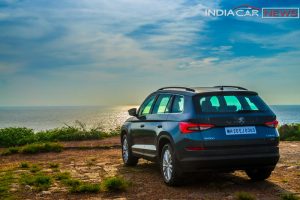 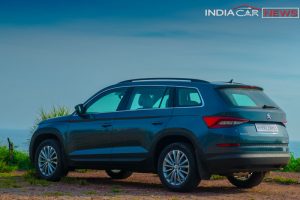 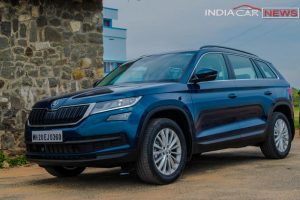 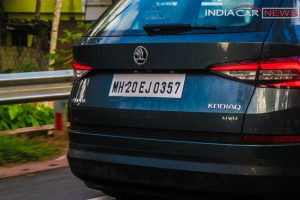 Overall, the Kodiaq lacks imposing presence like others in the segment but makes up for with its polished and matured styling.

The cabin of the Kodiaq feels quite familiar and that’s no bad thing. Like any other Skoda, it also gets the same dual-tone theme with the upper half of the dash finished in black and the lower half and seats in beige. The dash is well laid out and the edgy influence from the outside is evident here as well. The material used at most places feels plush and nice to touch except the horizontal running thick slab of trim that feels to glossy and plasticky. The aircon vents are vertical in shape and bigger in size, which not only helps in channelling the air better but also being quieter. Ergonomically, the cabin feels sorted and every feature is well within reach. 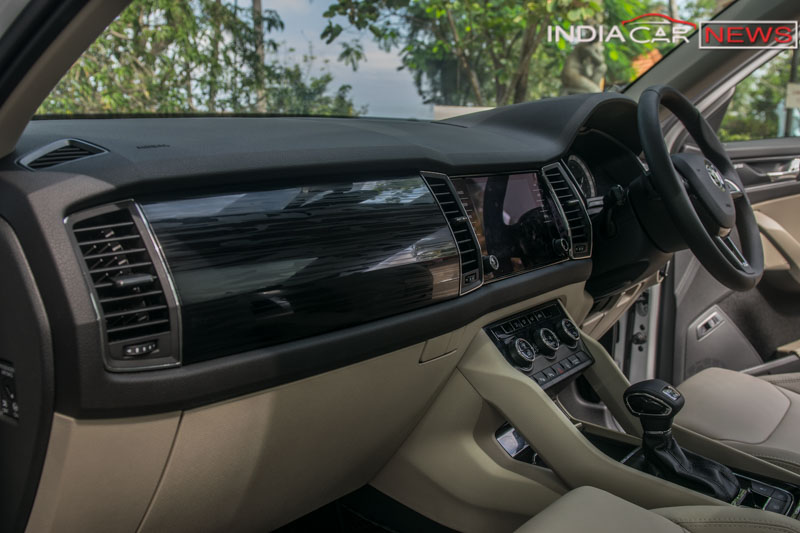 The front seats are well-cushioned and offer good support. It also features wide range of adjustments for the driver that can be altered electronically. The dash has been set low so you don’t sit too tall and the feel is more car-like than a 4.7-metre long SUV.

Getting into the middle row is very easy. The seats are quite spacious and comfortable for three average sized occupants. Here, Skoda is offering a really interesting feature called the ‘power nap package,’ which includes a blanket that’s tucked neatly at the back of driver seat, manual sunblinds and the really smart lateral support extensions for the headrests. The 40:20:40 split seats fold down and can be slid ahead by 180mm but they don’t tumble forward which makes the access to the rear bench a bit of task. Needless to say – the third row feels cramped and it is an ideal spot for the kids or for your pet. So, it wouldn’t be wrong if we call the Kodiaq a 5+2 and not a proper 7-seater.

The 8.0-inch touchscreen infotainment system is the same unit we’ve seen in the Octavia. It works fantastically and get all sort of connectivity options including the Apple Carplay and Android Auto. There’s a nice-sounding Canton music system with a sub-woofer in the boot and 10-colour ambient lightning system that keep you entertained. The panoramic sunroof is huge and stretches way back till the rear end making the overall cabin feel really premium.

In terms of features, the Kodiaq comes loaded till gills. It has parking sensors all-around, a clear rear-view camera, auto headlights and wipers, hands-free parking and drowsiness sensors to warn you and keep you safe. If you still meet an accident – there are as many as 9 airbags in this car which is not only segment-best but also better than most cars above its segment. Last but not the least, there’s a plastic bumper that pops out everytime when you open the door and protects the door edges from scratching when parked in tight spots and retracts when you close it.

The Kodiaq will only be available with a 2.0-litre diesel engine mated to a 7-speed autobox. It is the same unit that works under the hood of the Octavia and the Superb but power output in all the three cars remain different. The Kodiaq sits between the two and puts out a max 150bhp between 3500 and 4000rpm and a healthy 340Nm of peak torque between 1750 and 3000rpm. The numbers may not look that lucrative on paper but it feels quite adequate on the road. 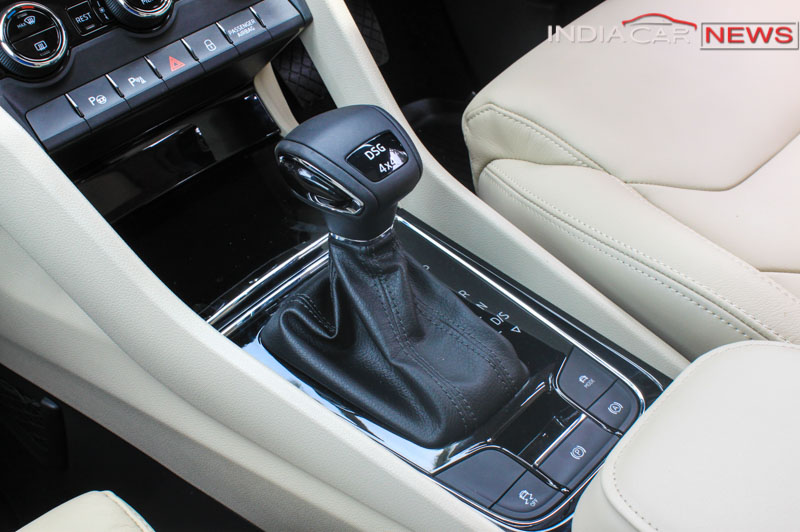 The engine is decently refined but the characteristic diesel clatter is audible at all times and becomes too evident while revving the mill too hard. Keep driving it in a relaxed manner – for which it is actually meant – and the Kodiaq won’t disappoint you. But try one fast overtake and lazy character of the car hits you in the face. More of this has to do with this Kodiaq’s humongous size and 1.8-tonne of flab. The seven-speed DSG gearbox does a good job and shifts around any turbo lag quite well. The SUV offers strong low end torque and mid-range punch that’ll keep you happy on most occasions, but being too enthusiastic with it, brings out a sense of unwanted reluctance from the motor’s end.

The Kodiaq gets Eco, Sport, Individual and Snow modes which alter the steering, engine and air-conditioning response depending on the mode. And yes, the modes have nothing to do with the suspension settings. Changing the mode to Sport changes the character up to certain extent. The DSG hold the gear for the long and the power delivery becomes jerky. I tried the Sport mode for a while but it just doesn’t suit the overall relaxed character of the SUV.

Unlike the rivals, the Kodiaq gets a monocoque chassis and that shows. With an independent front suspension and a multi-link rear, there’s a sense of firmness but possesses excellent damping properties. Internationally, the Kodiaq gets 19-inch tyres but the India-spec model comes with 18-inches for better ride and it really helps. Bump absorption is really good, and only the really big ones make it through. The Kodiaq just love highways, there it feels like home and the stability it offers is impeccable. 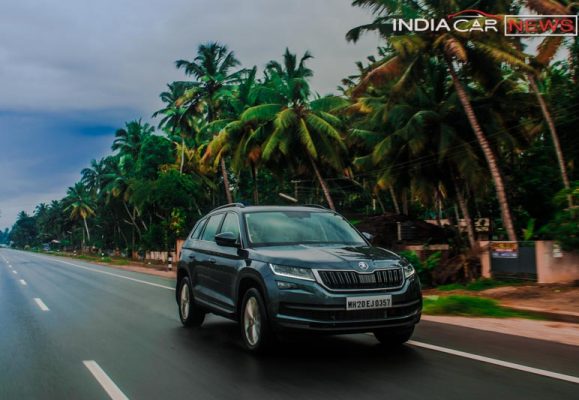 It’s an AWD and comes equipped with a Haldex all-wheel drive system that should allow mild off-roading. But its road biased nature is very much evident when you take it off the road. In regular conditions, the car sends 96 percent torque to the front wheels but when required, the system splits the toque to 50:50 for front and rear.

The steering wheel has light feel in normal mode but weighs up nicely when you are driving in Sports mode. The feedback isn’t like the Superb but it still better than most SUVs.  On the whole, the Skoda has maintained a good balance between ride and handling, and Kodiaq is an offering that should keep the ones driving and the driven delighted. 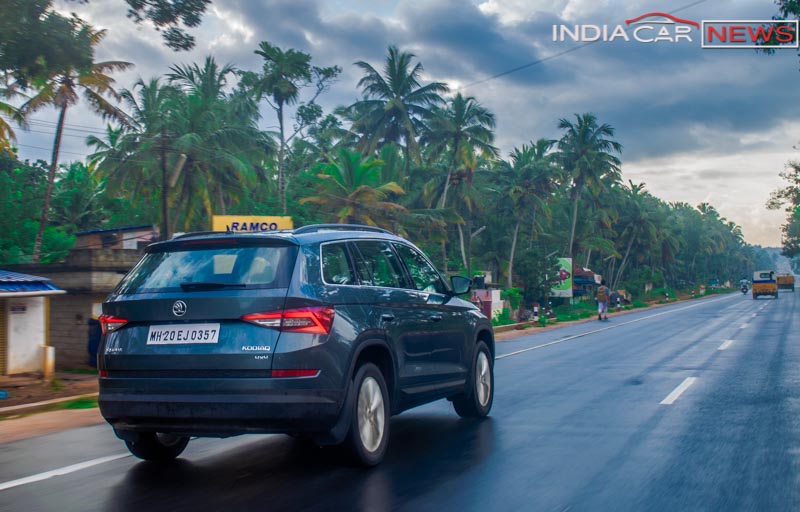 Skoda is not only pitching the Kodiaq as a Toyota Fortuner and Ford Endevour rival but also as a potent contender against the likes of BMW X1 and Audi Q3. In fact, this is the reason behind bringing only the top-specced version with all the bells & whistles. So, pricing is the key here. It definitely feels plush – is loaded with features – now it only a lucrative price tag.