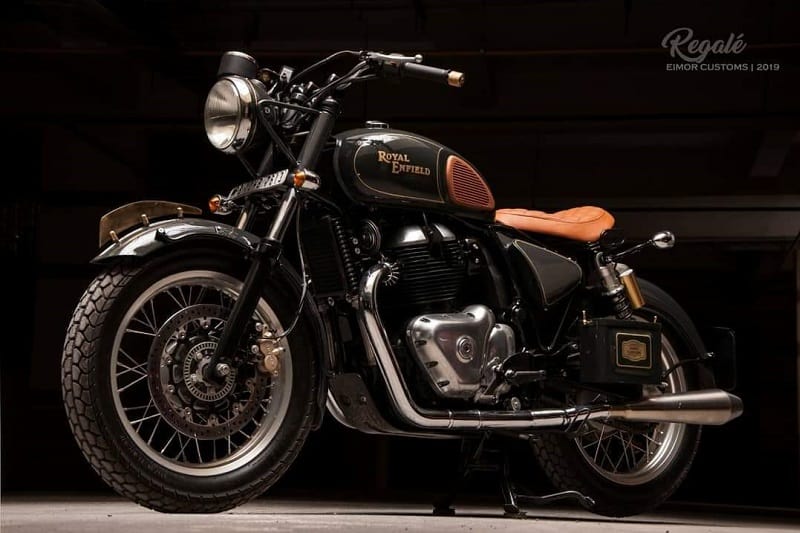 The 11th edition of the Royal Enfield Rider Mania was recently concluded in Goa. The event witnessed unveiling of the several custom bikes along with indulging activities including hill climbs races, food and music. Read – Royal Enfield Bullet, Classic, Thunderbird 500cc Bikes To Be Discontinued

One of the tastefully modified bikes that grabbed attention was the ‘Regale Bobber’ from Eimor Customs. Based on the RE Interceptor 650, the modified Royal Enfield Regale Bobber 650 has been painted in Dark Grey shade with contrast golden accents and monikers.

The Royal Enfield Regale Bobber 650 gets a flatter handlebar instead of the regular unit. The twin pod instrument dial has also been replaced with a single unit. The bike gets additional body-coloured Royal Enfield branded storage boxes on both sides.

Engine mechanism of the Royal Enfield Regale Bobber 650 is exactly similar to the RE Interceptor. It uses the 648cc air/oil-cooled, parallel-twin motor paired to a 6-speed gearbox. This fuel injected engine pushes out a peak power of 47bhp against 52Nm of torque.

Similar to the Royal Enfield Interceptor 650, the ‘Regale Bobber’ from Eimor Customs comes with the telescopic fork and gas-shocked twin shock absorbers at the front and rear axles respectively. The bike runs on the same 100/90-18 front and 130/70-18 rear tyres.