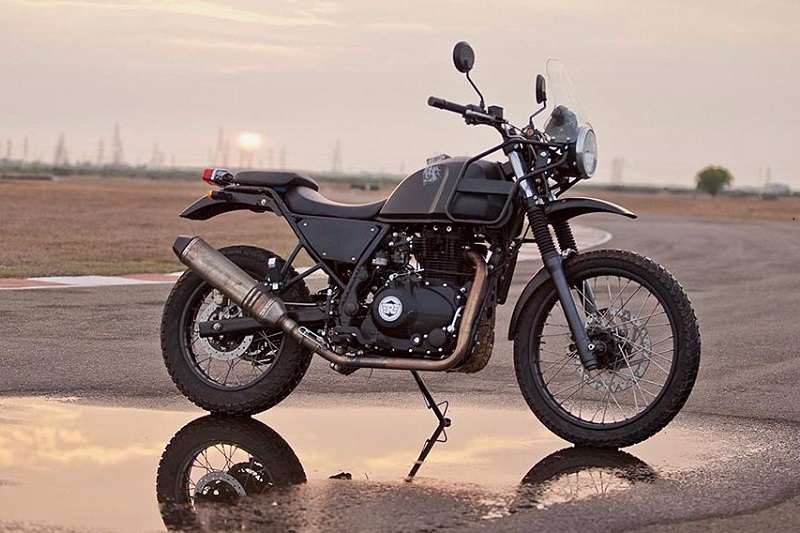 Likely to launch in 2018, the new Royal Enfield Himalayan 750 will get a parallel-twin 750cc, fuel injected engine.

Royal Enfield is working on an all-new 750cc motorcycle, which is likely to be called Interceptor 750. It was speculated that the company will use this 750cc engine in the bigger Himalayan. Now, it has been confirmed that the Royal Enfield Himalayan 750 adventure tourer is in the works. This was confirmed by the CEO of Eicher (the parent company of Royal Enfield), Mr. Siddharth Lal during an interview to Alan Cathcart, a well-known journalist at Motorcycle Magazine.

The bigger engined Himalayan is likely to be powered by a newly developed parallel twin 750cc engine, which will be offered in the Interceptor 750. It is expected that the new motorcycles could be unveiled at the 2017 EICMA (Milan Motor Show) in November. The new 750cc parallel twin-cylinder engine will be the most powerful ever produced by Royal Enfield and is expected to produce close to 45-50bhp of power and around 60Nm of torque. A five-speed manual gearbox will be offered as a standard.

The engine will also come with fuel injection system. Similar to the LS410 engine of the Himalayan, the new engine could use a combination of air and oil cooling. The Royal Enfield Himalayan 750 will get a revised chassis to accommodate bigger engine. It is expected to be slightly bigger in terms of proportions and bit heavier than the outgoing 410cc model. The 750cc motorcycle is expected to have a better build quality; however, design is likely to remain the same. Also See – 2017 Royal Enfield Himalayan BSIV model price, specs, features

It is expected that the bigger Himalayan could make its official debut at the 2017 EICMA Motor Show in November. Though, Royal Enfield is yet to make an official comment on its launch details. We believe that the bike could be unveiled in the country in early 2018; while launch is likely to take place in late 2018. Before Himalayan 750, the company will introduce the Interceptor 750. We will update you as soon as Royal Enfield announces its launch date.

Like the Interceptor 750 or Continental GT750, the new Himalayan 750cc motorcycle will be launched in several markets that make it an important product for Royal Enfield. We believe that this motorcycle will be priced aggressively in the market to achieve better sales number. It is likely to be priced in the range of Rs 3 lakh to Rs 4 lakh. Also Read – Royal Enfield Surf Racer & Gentleman Brat Custom Bikes Revealed

The upcoming RE’s middleweight adventure tourer will be powered by an all-new parallel-twin, 750cc, fuel injected engine. This engine will also power the soon-to-be-launched Interceptor 750 or Continental GT750. The oil-cooled motor will get a small radiator placed in front of the engine on the chassis. As for the power, this engine is expected to churn out power between 45bhp to 50bhp and close to 60Nm of torque.

There are no details on the transmission, although the bike could get a five-speed manual gearbox. The bike is likely to get an optional ABS (Anti-Lock Braking System). The changes will be made on the chassis to accommodate the all-new larger engine. In line with the new norms for two-wheelers, the engine will comply with the new BSIV emission norms.

Equipped with 750cc parallel twin engine, the new Himalayan 750 motorcycle will not return high fuel efficiency. We believe that this bike could deliver around 15-20kmpl in city and 20-25kmpl on the highways.

The 750cc Himalayan will look similar to the smaller sibling. Though, the company could make subtle design changes to make it look appealing. The bike will have a raw and sporty appeal. This model has been designed on a modified single tube chassis that also underpins the other RE bikes. However, the chassis will be modified to accommodate bigger sized engine. This will also bring in dimension changes. The bike will continue to feature round headlight, signature RE badge on side cowl, high-mounted spatter guard, raised rear seat, digital MID, up-swept exhaust and twin-pot instrument cluster with chrome ring. Like the existing Himalayan, the new 750cc Himalayan is expected to feature large 21-inch front and 17-inch rear wheels shod with off-road tyres.