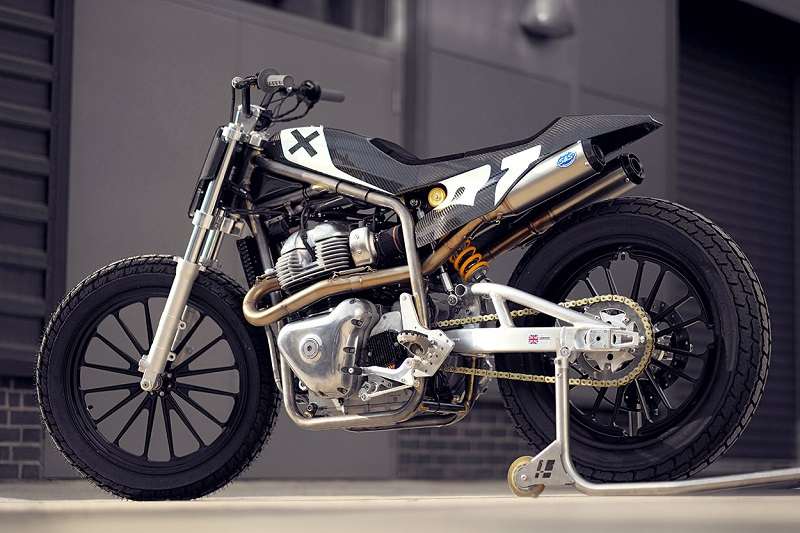 Royal Enfield 650 FT Concept To Debut At AFT Next Month

Royal Enfield 650 FT concept is ready to make its official debut at the American Flat Track (AFT) that’s scheduled to start next month. It will be the brand’s first competition tracker that will be ridden by Johnny Lewis in the Production Twins class on 28th and 29th August, 2020. The bikemaker has also sponsored a female-only tracker-building competition and revealed the Slide School 2020 curriculum.

“The Royal Enfield FT Concept has already shown promise so far. We’re already seeing great results from the motorcycle. The team at Harris Performance and Royal Enfield have done a great job with the chassis, and we’ve already begun working through small adjustments based on my feedback. With the way the schedule is shaping out with small tracks, we could surprise many people,” said Lewis.

Developed in collaboration with Harris Performance, the Royal Enfield 650 FT concept bike shares its platform with the RE Interceptor 650. The bikemaker has made essential upgrades for enhancing its flat track capabilities and performance. It comes equipped with larger 19-inch wheels with RDS traction race rims that are CNC machined from forged billet aluminium. The bike has Dumlop flat track tyres and S&S silencers. Read – More Royal Enfield 650cc Bikes To Launch In Coming Years

Suspension setup of the RE’s new 650cc FT concept includes a 41mm forks with Ohlins internals upfront and an Ohlins TTX shock at the rear. The bike derives its stopping power from a twin-pot calliper rear brake. It has custom brazed steel tube frame with an adjustable steering head angle.

Power for the Royal Enfield 650 FT comes from a big bore kit developed by S&S Cycle – the renowned American motorcycle engine and parts engineer and manufacturer. Its displacement has been increased to 750cc and ECU (engine control unit) has been customized to deliver the best of both upgrades.

Royal Enfield 650 FT Concept To Debut At AFT Next Month