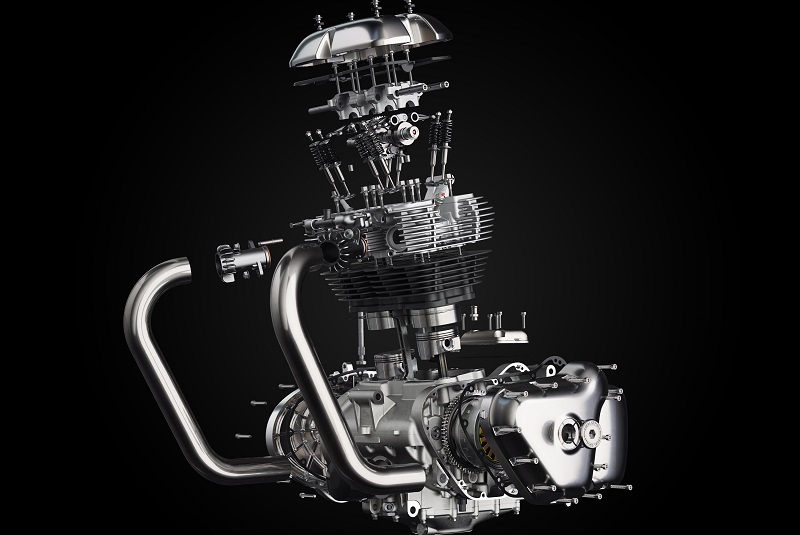 The new 650cc, air-cooled, parallel twin engine is capable of producing 47bhp of power and 52Nm of torque.

The core idea behind the modern 650cc twin engine was to develop a global platform that would carry the Royal Enfield legacy and character into modern context. The company claims that the new engine has been designed to offer the right balance between power, torque and usability, which ensures smooth riding experience. Also See – Royal Enfield Interceptor – All You Need To Know

It is a 4-stroke, single overhead cam, air-cooled, 648cc parallel twin cylinder engine. This engine is capable of producing a maximum power output of 47bhp along with a peak torque of 52Nm. According to Royal Enfield, this engine has been designed to achieve a high-level of modern refinement.

The engine maintains an under-stressed 9.5:1 compression ratio and the fuel injection system ensures that smooth, accessible power is available at all times. The focus of the development was on giving adequate torque, spread broadly throughout the rev range so that riders can tap into it instantly at anytime without the need for excessive shifting. As a result the engine feels fun, potent, and easy-to-use. Making this possible are a number of elements, starting in the very depths of the engine where there is a single-piece forged crankshaft (a first for Royal Enfield) which ensures strength and the ability to handle the twin’s torque. This crankshaft uses a 270-degree firing order, which gives a high degree of character to the engine’s power delivery. Also, thanks to the use of a balancer shaft, unwelcome vibrations have been eliminated. Also Read – Royal Enfield Himalayan To Get Bigger Engine