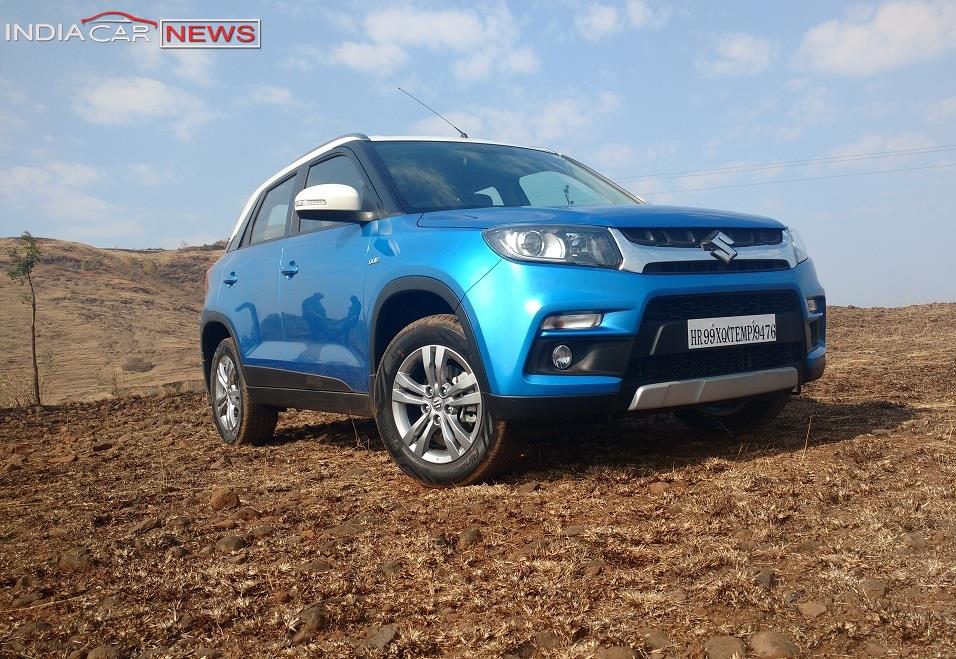 I finally got behind the wheel of the car for which ‘the nation wants to know’ (quite literally) – Maruti Suzuki Vitara Brezza. The reason I say this is because of the fact that ever since its global unveiling at the Delhi Auto Expo 2016, we, at ICN, have received hundreds of queries related to the product and thousands of people have shared our detailed report on different social media platforms to date. This shows the kind of buzz Maruti Suzuki’s first ever sub-4 metre SUV has been able to create.

The Maruti Brezza isn’t just yet another sub-4 metre SUV, this is indeed quite a special and a crucial product. Special – because it’s the first Maruti product, ever since its inception, developed entirely by MSI’s Indian R&D team with no validation from the parent company Suzuki Motor Corporation (SMC). This makes it a genuinely ‘made in India’ and ‘made for India’ product. Crucial – because this product will now decide the future course of the segment that came into existence only after the Ford EcoSport and is still not that big. Over 5600 bookings within just 2 days of its launch and the EcoSport prices coming down drastically (by up to Rs 1.10 lakh) right after that, shows how significant this product is both for the industry and Maruti Suzuki. Coming straight to the product, the Brezza is built on Suzuki’s Global C platform which is the same that underpins the international Vitara compact SUV. Though the engineers had to make several changes to make it compatible for India. Just so you know, the Brezza is about 180mm shorter than the global Vitara and is made specifically for Indian consumers. So, kudos to the folks at Maruti Suzuki India that kept working on it despite all odds and came up with a product that has been making headlines ever since its announcement. The Brezza shares several of its components with other existing Maruti Suzuki products. It features the same 1.3-litre multijet diesel unit that does duty in the Ciaz and the S-Cross, and is good for 89bhp and 200Nm. But does it have what it takes to become the segment leader (not just in sales numbers), let’s find out.

Maruti Vitara Brezza unquestionably is a crowd puller, thanks to its standout design. When we were driving the car on the outskirts of Pune, at least half a dozen people stopped and enquired us about the product and almost everybody turned their heads as we crossed them. This proves that the Maruti’s compact SUV has a universally acceptable design, though I personally find the Ford EcoSport a slightly more SUV-ish than the Brezza due to the former’s aggressive front fascia and a sportier rear profile with a tailgate-mounted spare wheel. The Brezza, however, looks overall more proportioned in design than the EcoSport, and all the credit for this goes to Maruti Suzuki’s India team that managed to design a great looking product while still keeping it under 4 metres. Some of the most interesting bits in the overall design of the car are its ‘bull horn’ headlamps with LED strip, single slat front grille in chrome finish, fog lamps with plastic surrounds, and of course the roof rails. While the front looks quite sporty, the rear profile is just average with a plain square-shaped two-piece tail-lamp and a horizontally placed chrome strip with the BREZZA embedded on it. There’s nothing special about the rear profile. The side profile, however, is no nonsense with sloping roof line, multi-spoke alloy wheels, strong character lines and plastic cladding spread across the lower body portion. The vehicle’s cabin feels a lot like Swift, possibly due to the all-black dashboard and similar steering wheel. What makes it different though is the instrument cluster that comes with multi-colour light options. One can set the light of the instrument cluster as per their taste. The top-of-the-line ZDi+ variant, the one we drove, also features a SMARTPLAY infotainment system with Apple CarPlay support and satellite navigation. Maruti Vitara Brezza feels just like any other Maruti Suzuki product, and that’s largely due to the same engine – 1.3-litre multijet diesel which powers several Maruti Suzuki cars including the Swift twins, Ciaz and S-Cross. This engine feels alive only after 1800-2000rpm with all the aforementioned cars, and below that there’s quite significant turbo lag. The Vitara Brezza too isn’t any different at initial RPMs, thus requires frequent gearshifts in heavy city traffic. But I must say, the turbo lag in this car is less than the Swift and the Dzire. As soon as you cross the 1900-2000rpm mark, this engine feels like a breeze. It offers a strong and punchy mid-range performance and does its job just well (if not exceptional) at higher RPMs too. Thanks to its light weight of 1197kgs, the Brezza probably offers better acceleration than both of its rivals – EcoSport and the TUV300. Though with 89bhp and 200Nm, the Brezza surely feels underpowered against the Ford EcoSport that has a 100bhp, 205Nm 1.5-litre diesel unit. One thing that impressed me most in the Brezza is its very well tuned suspension setup. The suspension not only takes care of all sorts of undulations with ease, it also helps in offering great performance around corners despite the higher centre of gravity due to its massive 198mm of ground clearance. It also weighs up the steering wheel, which gives you the confidence to go up on RPM range. Having said that, the steering feedback still needs improvement especially at lower speeds. The vehicle felt great till about 120kmph, but took on a slightly nervous tone once past it and the engine too felt panting. Last but not the least, the vehicle’s engine feels quite refined throughout the RPM range and the company’s engineers have worked superbly well to keep the NVH (noise, voice and harshness) levels under control.

Practicality is one aspect for which most Maruti Suzuki cars are known, and the Brezza takes it to yet another level. The sub-4 metre SUV offers its buyers multiple storage spaces, 1-litre bottle holders in all doors, cooled glove-box and the 60:40 split rear seat with fully-flat rear seat. Out of all the aforementioned features, I was impressed most with the fully flat split rear seats that literally turns the vehicle into a mini truck. You can actually carry 5-6 proper big size suitcases and other stuff when needed. A compact SUV buyer is the one who is either driving a B-segment hatchback or a sub-4 metre sedan, and now he wishes to own a car that gives him higher seating position, higher ground clearance and of course SUV-ish look. While the Brezza fulfils all these requirements, the rear seat comfort is an issue that it fails to address. The stuff that has been used to make the rear seat feels little hard, and this could actually be tiring for long drives. Thigh support and leg room too could be a problem for tall passengers, but it’s more than adequate for people with average Indian height. The front seats of the Brezza, on the other hand, are probably best-in-class; they are quite sporty and hold both the driver and co-passenger quite well. I thoroughly enjoyed being on the driver’s seat. With a stylish look, multiple segment first features, a highly frugal powertrain and decent overall performance, the Maruti Vitara Brezza surely is a great value for money product. Having said that, rear seat comfort, stability on higher speeds and turbo lag at initial RPMs are the three things that the Indo-Japanese carmaker need to work on.