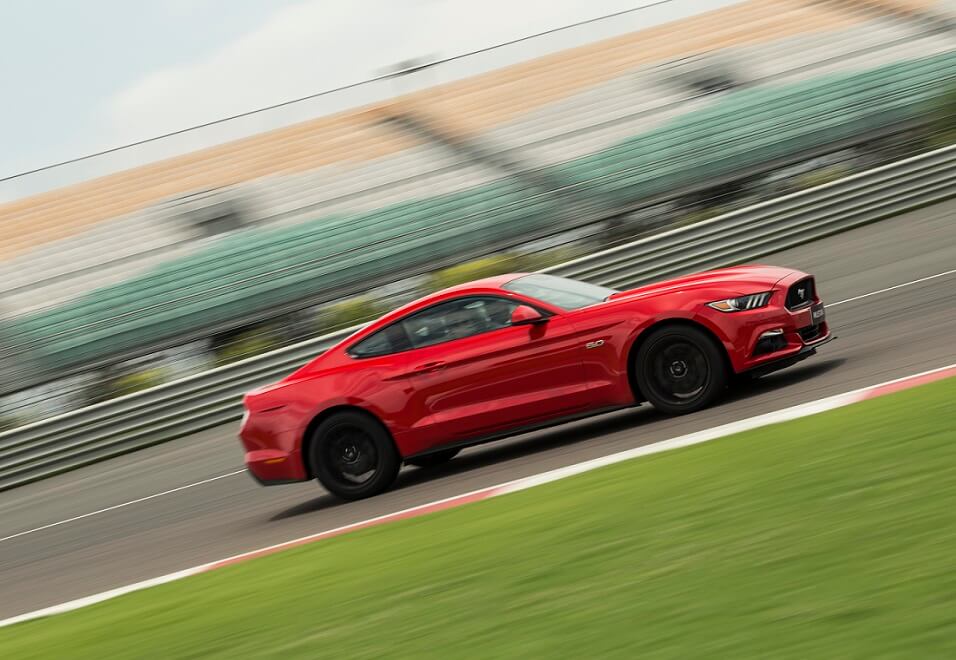 Thanks to the new independent suspensions both at the front and rear, the Ford Mustang 2016 feels planted and agile both on straights and in the corners.

The Ford Mustang is a very special car, it’s one of those very few vehicles that probably nobody hates. Surely, it has never been exotic but a car that offers you impeccable style and performance at a compelling price. First launched in 1964 in US, the ‘original pony car’ was made for enthusiasts who wanted a car that’s high on performance but easy on pocket – a rare combination. And that’s exactly what made the Mustang the pillar of American automotive culture, and one of the longest running car nameplates in the history of automobile. As a matter of fact, the company has sold over 9 million units of the Mustang ever since its introduction. Almost 5 decades later, the car was made in right-hand drive version and it finally entered the Indian market this month. As soon as it went on sale in RHD markets, it became the best-selling sports coupe with over 1.10 lakh units sold in 2015 alone.

I recently got the opportunity to drive and spend some quality time with this very special car on the Buddh International Circuit, Greater Noida. And believe me, it made me want more despite the fact that I took good 5 laps (that’s about 15Kms).

Like its predecessors, the new Ford Mustang 2016 too is definitely a head turner and I don’t think there are as attractive cars as this one at this price point. While it retains some key design elements like long bonnet and short rear deck, the car is now lower and wider. The side profile looks refreshing with the lowered roofline, revised pillars and meaty 19-inch multi-spoke alloy wheels. Compared to the 2014 Ford Mustang, the new one looks more muscular and sleeker though it has identical silhouette and tail-lamps. The signature shark-bite front fascia and trapezoidal grille now look more evolved. 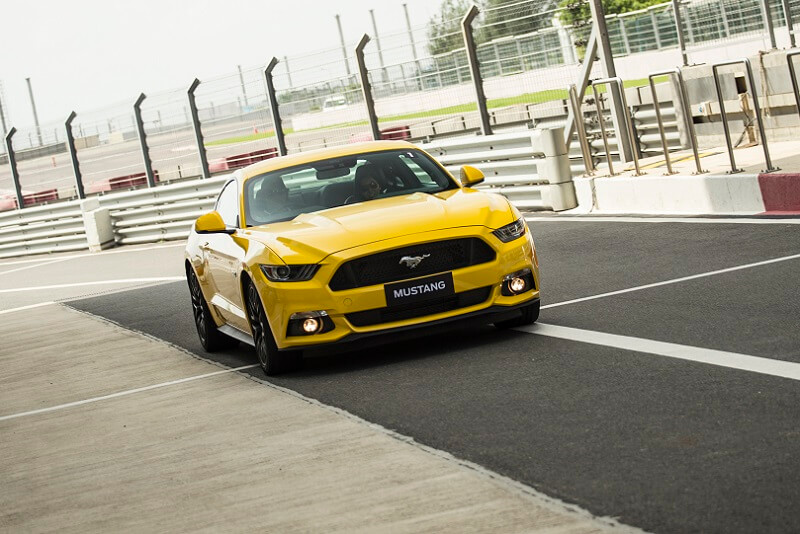 Get inside the car, and you’ll see the cockpit-inspired dual-tone dashboard with three-spoke steering wheel with the Mustang Logo in chrome at the centre of it. While the overall shape of the cabin gives a retro look to it, lots of chrome and control buttons on the steering wheel give it a contemporary feel. The toggle buttons on the dashboard remind of the old-gen Mustangs. The plastic quality and the overall feel may not match other luxury cars at this price, but who buys Mustangs for that?

Since the Mustang is quite wide, it offers plenty of room to its front passengers. The driver’s seat is the best place to be in a Mustang, as it’s six-way adjustable and is cooled and heated. The vehicle’s rear seats are too cramped for adults, so better fold them down to enhance the storage capacity. 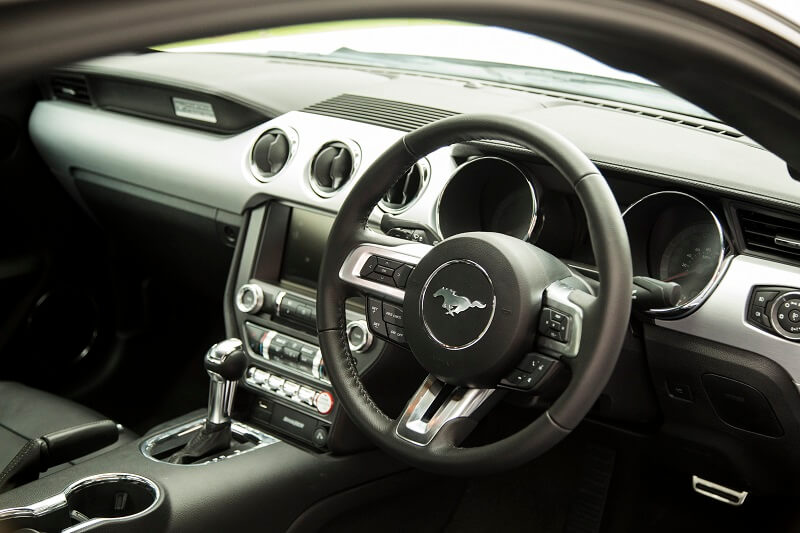 Coming to the most important bit of the review – performance – for which the Ford Mustangs are actually bought for.

The model that’s launched in India feature a 5.0-litre, V8 petrol engine coupled to a six-speed dual-clutch automatic gearbox. This one churns out 396bhp, which is about 10bhp less than its European counterpart. But, I don’t think that will make any difference in the way it drives in real conditions. The V8 petrol mill of the Mustang sounds just perfect – it’s loud and not too harsh. The 6-speed automatic gearbox of the Mustang lacks the precision and smoothness of new-age German dual-clutch gearboxes as there’s a negligible gap between the input and the response. But once you get used to it, like I did after the first lap, it’s a lot of fun.

Ford is known for making one of the best driver’s cars in the world, and the Mustang has been a benchmark. The new Mustang isn’t any different despite the fact that it’s heavier and bigger than the previous models. 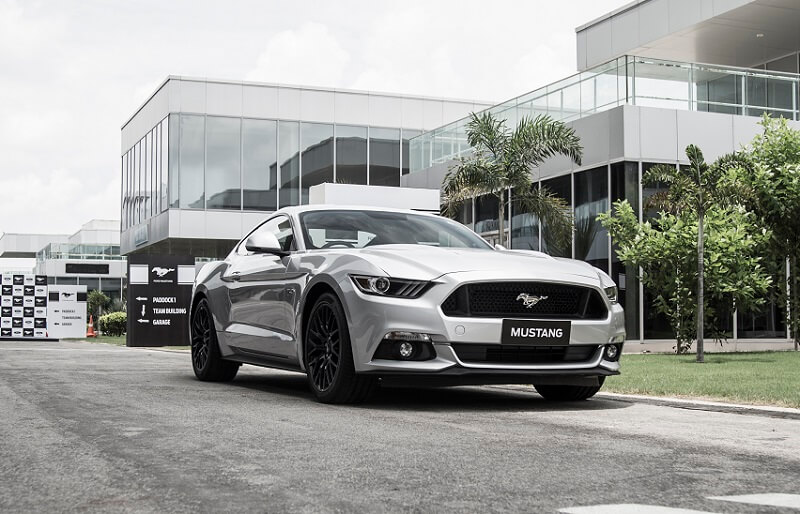 Thanks to the new independent suspensions both at the front and rear, the car feels planted and agile both on straights and in the corners. This gives it an edge over other V8-engined American sports car that are still considered fast in a straight line only. What further helps it do well in corners is its precise and direct steering, as the feedback is just bang on. This is, in fact, one of the most fun-to-drive cars that one can buy below Rs 70 lakh in India.

Since it’s a V8 powertrain, you have ample of torque all the time and you’ll have not have to make much efforts to overtake. This thing picks up the pace in no time, and thanks to the admirable braking performance it gives you the confidence to keep playing with it. At corners, all you need to do is gently push the brake and a little input to the steering wheel, and it will be in your control even at really high speeds.

Ford Mustang offers a plenty of drive and steering modes to choose from thus allowing its drivers to enjoy driving it in almost all sorts of conditions. You have four drive models – Normal, Sport+, Track and Race that you can choose via toggle switches given on the dashboard. 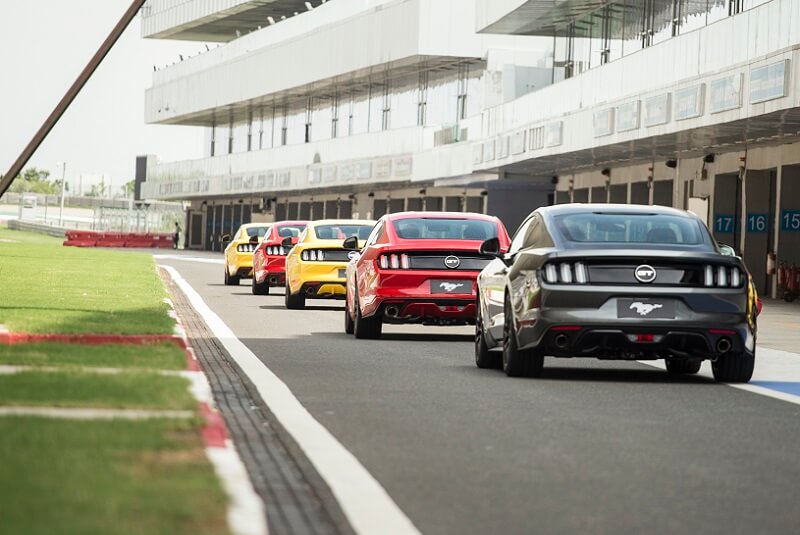 Though we tested the car only on the track, I am sure it would be equally good on regular roads as well.

Ford Mustang is one of the most fun-to-drive cars I have ever driven to date. It feels planted & in-control at all speeds, comfortable and exceptionally good at corners. The only drawback is its interior quality, but Mustang lovers buys it for sheer driving pleasure and nothing else. At Rs 65 lakh (ex-showroom), it’s priced quite competitively and I hope a lot of enthusiasts will go for it.

The Mustang feels planted & in-control at all speeds, comfortable and exceptionally good at corners. The only drawback is its interior quality, but Mustang lovers buys it for sheer driving pleasure and nothing else.