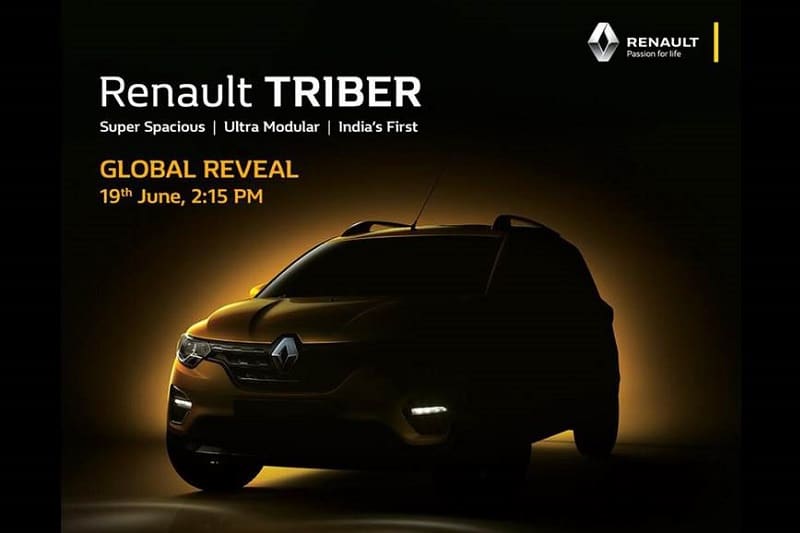 Renault Triber is based on the modified version of the Kwid’s CMF-A modular platform.

Renault India has announced that its all-new Triber MPV will have its world premiere on 19th June in New Delhi. The carmaker has also released a teaser picture of the upcoming MPV revealing its silhouette and front styling. The Renault Triber (codename RBC) shares some of its design bits with the Captur and the global-spec Kadjar SUV.

Based on the modified version of the Kwid’s CMF-A modular platform, the Renault Triber features a V-shaped grille, a large bumper, wide headlamps with LED DRLs and a sculpted clamshell bonnet at the front end. The roof rails will be offered only on the top-end trim.

Renault claims that the Triber is a “Super Spacious” and “Ultra Modular” 7-seater MPV. While the official feature details are yet to be revealed, it’s likely to come with a large touchscreen infotainment system with Android Auto and Apple CarPlay support. Features such as driver economy rating and driving-style coaching might also be offered on the MPV. Read – 2019 Renault Duster Facelift Completely Revealed

The third row of seats will have a dedicated AC vent. The list of standard safety features will include dual front airbags, rear parking sensors, ABS (anti-lock braking system) and a speed warning system. The range-topping trim could be exclusively offered a rear parking camera.

Under the hood, the Renault Triber will house a tweaked version of the Kwid’s 1.0L BR10, 3-cylinder petrol engine. The gasoline unit will be tuned for generating extra power (around 7bhp). A 5-speed manual gearbox will be standard across the lineup. Rumour has it that the company might introduce a 5-speed AMT and a turbocharged petrol engine on the Triber at a later stage.