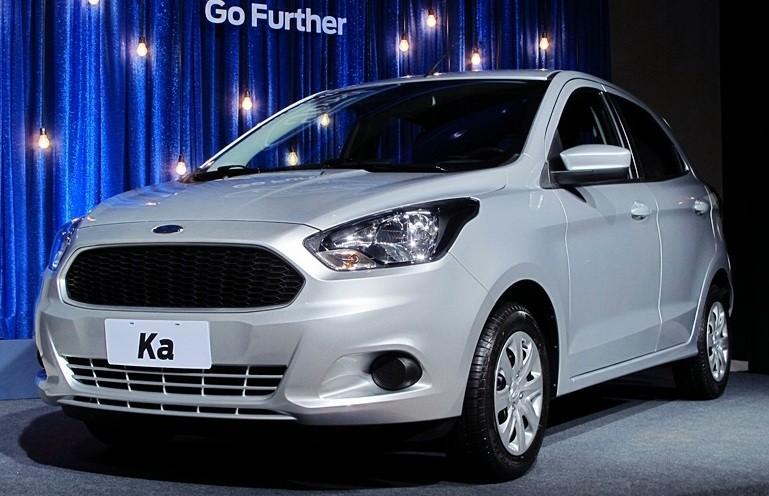 American automaker Ford has introduced the new generation Ka hatchback aka Figo in the Brazilian market. The new Ka is larger, more equipped and expensive than the previous model, and it is priced at R $ 35,390 (INR 9.53 lakh). Deliveries for the new model will commence from September while the Ford Ka+ sedan will go on sale in October, 2014. The new Ford Ka is a global product which is powered by a 1.0-litre flex three-cylinder engine that is capable of developing a top power output of 85bhp at 6300-6500rpm and a peak torque of 107Nm at 4,500rpm. Power is transmitted to front wheels of the hatchback via a five-speed manual transmission gearbox. The new Ka looks completely restyled on the outside and is larger in size that the previous generation model. Its front fascia looks more voluminous and is equipped with the honeycomb grid format grille instead of chrome slats found in the concept. The bonnet features pronounced creases which visually flow to meet the A-pillar. The side profile features a prominent crease that starts at the front wheel and runs across the length and meets the taillights. The external dimensions of the hatchback have been increased significantly which in return offers an improved cabin space.

The new generation Ford Ka will come in two versions- SE and SEL. The base model is equipped with power steering with height adjustment function, front electric windows, air conditioning, radio with USB and Bluetooth, body coloured door handles and ORVMs and the gear shift indicator on the dashboard.

The Ford Ka SE Plus variant gets added features such as rear electric windows and new infotainment system comprises of SYNC radio/CD/MP3 player and voice commands, and the audio and phone controls are mounted on the steering wheel. Adding to it, this model features electronic stability control and traction assistant and exit ramps. The top-spec model features 15-inch alloy wheels, fog lamps, chrome inserts on the front grille.