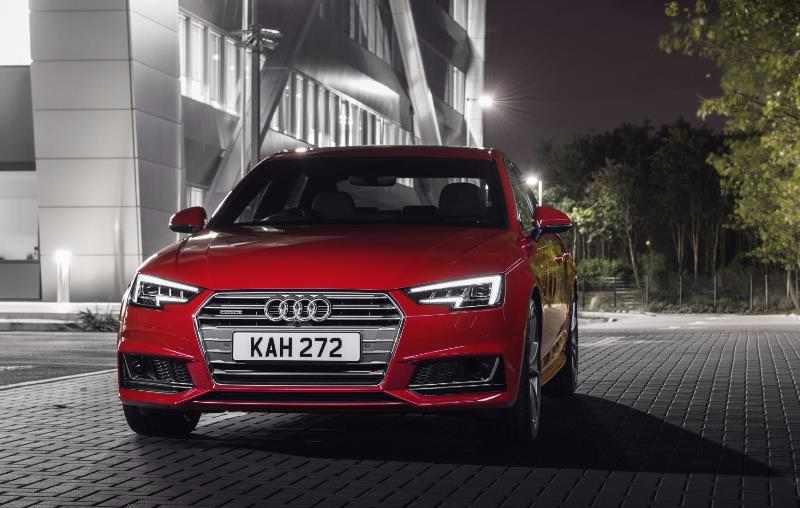 September 8, 2016 : The new generation Audi A4 2016 sedan has finally been launched in India at Rs 38.10 lakh, ex-showroom New Delhi.Lighter by 95kgs, the new A4 is claimed to offer more space to both front and rear occupants. The new model is available in two variants – Plus and Technology. First unveiled at the 2015 Frankfurt Motor Show, the new A4 is based on the VW Group’s new MLB evo platform. Based on the company’s new design language, the sedan gets sharper looking headlamps with LEDs, new striking hexagonal grille and new LED tail-lights. As a reminder, the current version of the A4 has been on sale in the market since 2008.

The new Audi A4 initially launched with the option of a 1.4-litre turbocharged petrol engine. Paired to a 7-speed S-Tronic automatic gearbox, this engine is capable of producing 150PS of power and 250Nm of torque. The diesel version will be launched on later stage. Inside the cabin, the sedan gets Audi’s ‘Virtual Cockpit’ that accommodates 12.3-inch TFT display. This is the same feature that was first introduced in Audi TT.

The German automaker had showcased the new A4 at the Auto Expo 2016 in February 2016. The fifth generation saloon’s design inspiration comes from Prologue Concept cues of which you can also see on the new TT and R8. It will rival the likes of the Mercedes-Benz C-Class, BMW 3-Series and the Jaguar XE. Also Read- Audi Q2 SUV- All You Need to Know

The new A4 is claimed to be more premium and feature loaded than the previous car. The sedan is priced in the range of Rs 38.10 lakh to Rs 41.20 lakh. As a reminder, the previous model was priced at Rs 35.95 lakh for base variant and Rs 41.95 lakh for top-end model. All the prices are ex-showroom, New Delhi.

Initially, the sedan is available with the option of a 1.4-litre TSI petrol engine that is capable of producing 148bhp of power and 250Nm of torque. Transmission duties will be carried out by a 7-speed S-Tronic Automatic gearbox. The sedan accelerates to 100kmph from zero in mere 8.5 seconds.

On Later stage, the gasoline version of the sedan could also get a 2.0-litre TFSI unit that is capable of producing 190bhp of power and 320Nm of torque. On the other hand, the diesel model will get a 2.0-litre TDI unit that is good for 190bhp and 400Nm of torque. Power will be transmitted to the front wheels via a 7-speed AT gearbox. The company might also introduce a 6-speed manual gearbox to cater to wider audience.

If reports are to be believed, Audi is also considering a 1.8-litre TFSI petrol engines that also powers the Skoda Octavia. There could be a 3.0-litre TFSI petrol and 3.0-litre TDI Quattro 4×4 engines as well that will power the top-end performance oriented Audi S4 versions. Also Read- Three Audi Electric Cars by 2020: First Will Be An Electric SUV

Based on the new MLB EVO Front Wheel Drive Platform, the new A4 is claimed to be 120kgs lighter than the previous model. While the petrol version is claimed to return around 17.84kmpl, the oil burner is expected to deliver 20kmpl.

The overall profile of the new A4 is widely similar to its predecessor, but the sedan comes with a fresh exterior design. Based on the second generation of the flexible MLB Evo platform, the new model is more masculine and has sharper looks. Upfront is a single-frame wider grille and restyled headlamps that give it an aggressive profile. Other design highlights include chrome strip within the waistline, alloys with new design, sloping roofline and newly styled compact LED tail-lamps. The range-topping variants would feature matrix LED headlamps as an optional.

New Audi A4 2016 Interiors and Features

While the exterior styling of the sedan is very similar to the current car, the cabin is where the majority of the changes can be seen. The sedan comes with an all-new cabin featuring 12.3-inch virtual cockpit that we have already seen in the TT. It features a completely redesigned centre console and dashboard. Adding to it, seats, steering wheel and tablet style MMI display have also seen a new design. The company would also introduce a new Design Selection Cabin, allowing customers to change the cabin according to their needs. The feature list includes Bang & Olufsen Sound System with 3D surround sound, LED Matrix headlamps with dynamic turn indicators, Wireless phone charging, Ambient Lighting sunroof and three-zone climate control, 17-inch alloys, Audi drive select and the 7-inch MMI interface with smartphone integration.