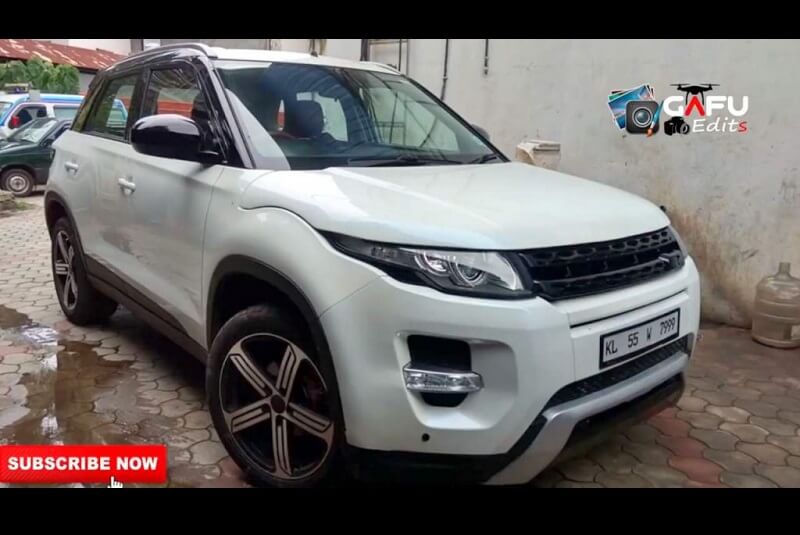 The Maruti Vitara Brezza is modified by a Kerala based customizer to look like a Range Rover Evoque; it costs Rs 6 lakhs

We have recently witnessed the modified Vitara Brezza with Jeep Compass like grille. Here is one new example which shows that a modified Vitara Brezza with Range Rover Evoque’s styling elements. This modification is done by a Kerala based customiser that has smartly transformed this mini SUV to look like a Evoque. The entire customisation cost Rs 6 lakhs and it looks pretty convincing.

The customised Vitara Brezza SUV features an actual Range Rover Evouqe’s front bumper, but it has been modified to fit the narrower dimensions of the Brezza. Not just Bumper, the updated Brezza SUV gets Evoque’s projector headlamp, and the two-bar grille in gloss black. However, the customised model misses out on large fog lamps enclosures and the big bumper trim. Read – Top 5 Best Modified Maruti Vitara Brezzas

The side profile of this modified Maruti Vitara Brezza gets larger 5-spoke dual-tone wheels, which is all-new and different than the offered on the Evoque. At the back, the SUV also gets Evoque’s tail-lamps, bumper and faux chrome trimmed exhaust outlets. Similar to the Evoque, the customised Brezza gets dual-tone white and gloss black paint scheme. The cabin is not likely to witness major changes and is largely the stock model. The changes offered are in the form of dual-tone red and black interior scheme. Also See – DC Design Gives Maruti Vitara Brezza A Unique Makeover

Changes are limited to styling part of the SUV. It is powered by the same 1.3-litre DDiS diesel engine that churns out 89bhp of power at 4,000rpm and a peak torque of 200Nm at 1,750rpm. Power is transmitted to the front wheels via a 5-speed manual gearbox.