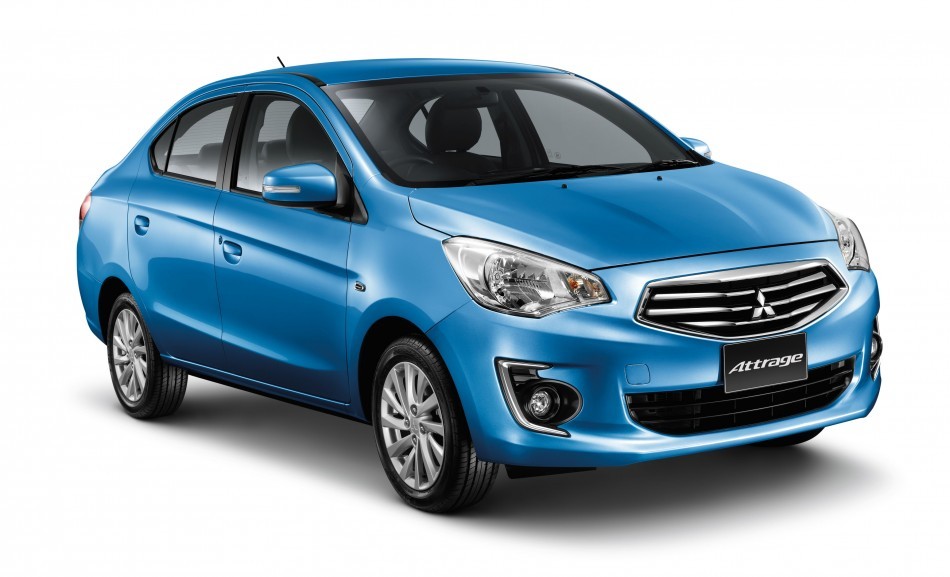 Japanese carmaker Mitsubishi is planning to launch five new cars in India by 2015-16. The company will introduce the Mirage hatchback and the Attrage sedan in the country next year. At the 2014 Bangkok Motor Show, Mitsubishi unveiled the new Attrage sedan which will be launched in Thailand in a couple of months.

Named as the “Global Compact Sedan”, Mitsubishi Attrage will compete against the likes of Sunny sedan, Fiat Linea Classic, Toyota Etios and others. The sedan is not a sub-4 metre sedan measuring 4244mm in length and 1669mm in width and 1514mm in height. It has a wheelbase of 2550mm and 170mm of ground clearance. Instead of a tall boy styling, the car looks sporty with its low and jellybean shape. The front fascia of the sedan features horizontal slat grilles with 3-diamond Mitsubishi logo positioned in the centre. The grille complemented by sweptback headlamps. The sporty hood features prominent lines which merge into the A-Pillar. Its large bumper gets wide air dam and a set of fog lamps in black casing. The side profile of the sedan has body coloured bumpers and door handles, and its flared wheel arches have been fitted to 14-inch alloy wheels. At the back, the vehicle gets well proportioned boot space, wrap-around tail lamps and chrome strip running across the boot-lid.

Inside the cabin, the Attrage sedan looks simple and is equipped with good amount of comfort and convenience features. The dual tone interior scheme, flat dashboard offers a rich feel, while the central console has AC vents and music system. The top spec model sport automatic climate control, while the entry level models get manual AC. It is spacious enough to carry five adults comfortably.

On safety front, this sedan gets dual airbags for driver and its co-occupant, front seat belts with pretensioners which automatically tighten on collision, Anti-lock braking system with electronic brake-force distribution and others.

The Mitsubishi Attrage is packed with a 1.2-litre 3-cylinder MIVEC engine that also powers the Mirage hatchback. This engine is capable of developing a top power output of 76bhp and 100Nm of top torque. Power is transmitted to front wheels via a five-speed manual or a CVT auto gearbox.