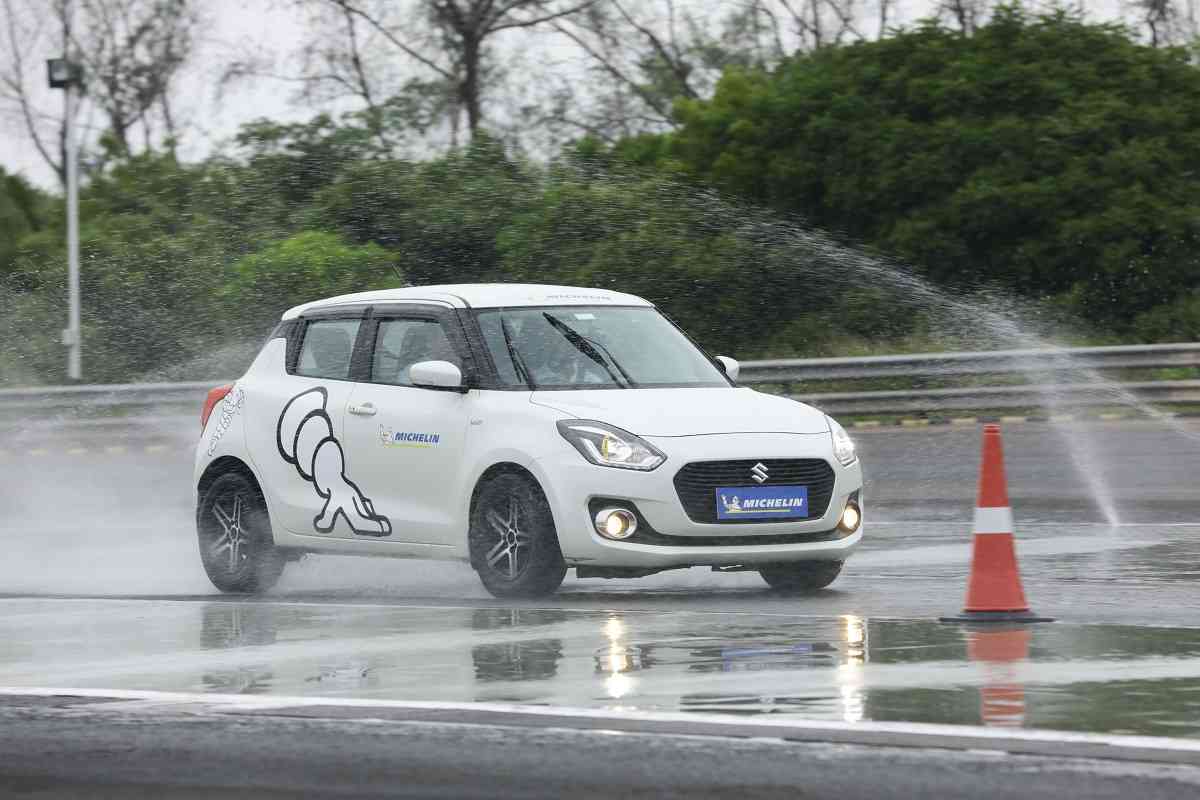 It’s not very common for us Indian automobile reviewers/journalists to test newly-launched tyres, that’s because most tyremakers don’t organise such events. The only time we get to test tyres (stock ones) is at media drives of brand-new vehicles. And that too for a limited period on a planned route. So when about a month ago, Michelin called me to test one of their brand new mass-segment tyres at the Chennai-based Wabco Proving Grounds, I straight away said yes to it. It was an opportunity to test their newly launched mass-segment tyre – Michelin Energy XM2+ – on different terrain conditions. Interestingly, we were given both brand new tyres and almost worn out ones to test their capabilities and reliability.

The tyre that I am talking about is the Michelin Energy XM2+ that comes at a starting price of Rs 5090. The test car that was provided to us was the Maruti Suzuki Swift, one of the best-selling cars in India. The same tyres can be used for different cars including Hyundai Elite i20, Maruti Suzuki Baleno, Volkswagen and likes. Since the company has benchmarked the Energy XM2+ against the Bridgestone B290, it was obvious for them to provide those set of tyres too fitted on the same car. Just so you know, the Michelin Energy XM2+ are silica based tyres just like its rival B290. The only difference is in tread pattern and compound. The tyre profile of course was similar – 185/70-R14.

First Test – Braking On Wet Surface With Worn Out Tyres

The first test was the wet braking in which we had to slam the brakes hard when the car was at 100kmph speed. This was to test the company’s claim that the Energy XM2+ installed car would reduce the stopping distance by 3.3-metres, compared to the competition tyre. And we were actually quite surprised with the results. Not only XM2+ provided a better grip, it also cut braking distance significantly. And a gap of 3.3-metres between the two cars, can be a matter of life and death in real-life situation.

Interestingly, the tyres that we tested were both almost worn-out ones which is when one must changes tyres. As per the company’s claim the Energy XM2+ can run for about 1.25 lakh Kms without any issues, and the kind of grip it gave us during the wet surface test I can testify that. When the tyres are brand new, and you test it with the competition tyre, the stopping distance between the two would be about 2.4-metres – again a huge gap.

Now before you ask me why Bridgestone B290 couldn’t perform as good as the XM2+, well the simple answer to that is the fact that the tread pattern and compound on the latter helps provide better grip. This means the ABS kicked in much early for Bridgestone B290 as the tyres started losing the grip. Whereas in case of Energy XM2+, the ABS was less protruding and natural owing to their better grip.

While the first test gave us a great idea of Michelin Energy XM2+ ‘s performance in wet conditions, the second test was to their grip on sharp corners and regular tarmac. And this time around, we were given a brand new set of tyres on both cars. The results were the same on this test as well, Michelin not only offered better grip on tarmac, it also was found slightly better on some truly sharp corners giving you more confidence. We also did slalom course to test the tyres’ grip and handling.

For people not in the know, a slalom test is performed on a dry patch where a vehicle goes through quick turning sequences at a maximum speed. For this a total of 10-12 cones are placed at a distance of about 18-metres. This test gives a clearer idea of car’s handling attributes. And I can straight away tell you that Michelin Energy XM2+ installed Swift did a fairly good job despite being mass-segment tyres. In a nutshell, Michelin has done a commendable job with these tyres and they offer the best ride & handling balance in its competition.